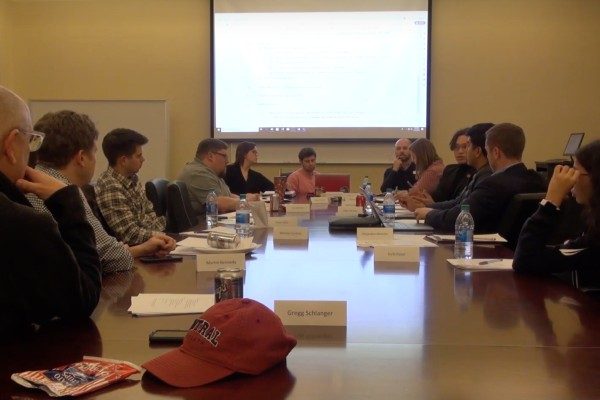 Here’s some useful advice if you’re considering a future in government: If you find yourself in a public meeting discussing ways to violate the First Amendment without getting caught, you’re probably going to get caught.

It’s a lesson leaders at Central Washington University could have used a bit sooner. Recently, they were recorded criticizing coverage by the university’s student newspaper and TV station, and then debating how to cut student media funding in ways that might hide their anti-speech motivation.

The remarkable footage of the group coming up with pretextual justifications for censoring students comes from CWU’s own, publicly-available recording of the Nov. 20 meeting of its Services and Activities Committee, the group tasked with making recommendations to the university’s board of trustees on how to fund university programs and student groups. The committee singles out coverage by CWU’s student newspaper, The Observer, which has publicly criticized some CWU officials for requiring student reporters to submit interview questions to administrators for prior review before allowing them to interview employees.

FIRE wrote to CWU last month reminding them that such practices violate the First Amendment. CWU subsequently downplayed an ongoing rift between administrators and the paper. But after this latest threat, FIRE, joined by the Student Press Law Center, wrote again to the University this week. This time, we’ve got video evidence that CWU, in threatening to defund its student media over coverage it dislikes, also threatens to violate both the First Amendment and Washington state law protecting student journalists.

(To be fair, the recording here is mostly just a fun bonus. It wouldn’t exactly take Scooby Doo to unravel this caper without it.)

‘I think that we are retaliating against them…’

At last month’s Services and Activities committee meeting, Alex Harrington, a member of the committee who is also the student member of the CWU Board of Trustees, read into the record a proposal to revoke base funding for all student media. (The discussion begins at about the 1:54 mark below.) He specifically references reporting by The Observer and the university TV program Central News Watch.

Harrington describes the outlets as “deliberately and maliciously misrepresent[ing] the actions and statements of members of the Central Washington University community” and “willfully provid[ing] misinformation to the student body.”

Joseph Bryant, the committee advisor and executive director of CWU’s Office of Student Rights & Responsibilities, speaks up with concerns about whether the proposal is legal.

“[The committee] cannot make any decisions based on the content that is presented by student media,” Bryant said, explaining that there are “[a] very strong amount of protections for student media.”

Bennett later seems to consider The Observer’s ongoing allegations of censorship by CWU.

“This,” he says, “could be the censorship they’re talking about.”

Yes. Yes it could.

Still, the discussion turns to ways the committee might circumvent those pesky laws and meddling kids.

For one, Harrington’s proposal to defund all student media, as opposed to just defunding The Observer, is considered as perhaps a more legally acceptable way to silence a few troublesome publications.

(It’s not. Even if collective punishment worked to obfuscate an insidious motive, making a video about why you’re doing it tends to undermine the veneer of innocence.)

“What if we waited until the New Year and this is all forgotten about?” asks one member. “Can we give it three months or so, let it settle down?”

Defund the groups then, he suggests. No one will be the wiser!

Other members propose waiting until the next annual report rolls around.

“Kill two birds with one stone,” one says.

“Using . . . the [annual] report, that essentially the review we’re already planning on doing,” another member suggests, and the defunding will seem like a routine cut. There won’t be any way to connect the committee’s actions to The Observer’s coverage.

Except, unfortunately for CWU, we’ve got this whole discussion on video.

Press censorship is unlawful whenever it’s motivated by a desire to control, punish, or influence content. Since the motivation for the defunding never changes, the mechanism under consideration doesn’t matter — all the plans pitched here, however rubber-mask-derived, end up being unlawful. That they’re all calculated specifically to put distance between the group’s motivation and its actions underscores the lurking First Amendment violation.

FIRE and the SPLC, in their letter sent to CWU, detail why defunding student media as a pretext for censoring students — at a public institution bound by federal and state law — is unlawful.

“The Committee may not act adversely against CWU student media without casting doubt over the constitutionality of its decision.”

“This proposed funding cut follows, and is connected to, allegations published by The Observer that various departments at CWU have required student journalists to submit interview questions for approval in advance of interviews, which the journalists argue restricts their ability to obtain candid responses and write articles free from administrative interference,” the groups wrote.

“[T]he threat . . . is inconsistent with CWU’s obligations under the First Amendment and Washington state law,” the groups wrote, citing both the Constitution and Washington’s New Voices Act (RCW 28B.10.037), which protects freedom of speech and freedom of the press in school-sponsored media.

“The Committee may not act adversely against CWU student media without casting doubt over the constitutionality of its decision,” they conclude. “This is true regardless of any creative reasons the Committee may conceive for its action, including meritless allegations that The Observer’s content was defamatory, that student publications have underperformed on annual reports, or that action is being taken against all similarly-situated programs.”

FIRE and SPLC have requested a response from CWU by Dec. 19.

We’ll let you know what they say.