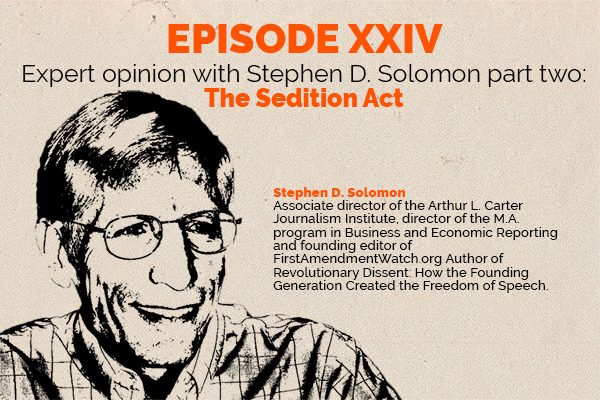 Ah! what glorious days are coming; how I anticipate the brilliancy of the American court! … [H]ere is the president going in state to the senate house to confirm the law for the abolition of the liberty of the press. Men and brethren will not these things be so?

A mere seven years after the adoption of the Bill of Rights and the First Amendment’s promise that “Congress shall make no law…abridging the freedom of speech, or of the press,” Congress had done just that. The Sedition Act paved the way for the prosecution and imprisonment of both journalists, editors, politicians, and ordinary Americans engaging in political, satirical and symbolic speech.

In part two of this conversation with NYU professor Stephen Solomon, we explore how the Americans who had championed freedom of speech as the “great bulwark of liberty” and thumbed their noses at English sedition laws in the lead up to the Revolution came to adopt their own sedition law. We discuss issues including: