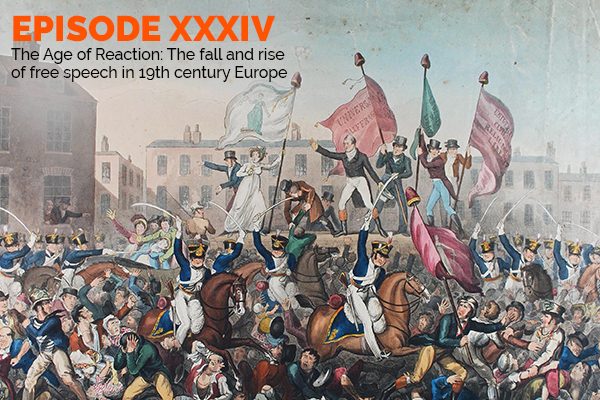 The 18th century ended with free speech in full retreat. With the French Revolution, the call for “Enlightenment Now!” was no longer seen as the harbinger of humanity’s inevitable march toward progress. It had become synonymous with radical forces of destruction drowning monarchy, tradition, and religion in the blood of kings, aristocrats, and nuns.

With the defeat of Napoleon in 1814, conservatives and monarchs were firmly back in power — and they had no intention of letting go. Never again were those rulers who put down wild-eyed revolutionaries like mad dogs going to allow radicals to seduce the people with lofty principles and propaganda.

In order to rebuild a stable Europe with respect for authority and tradition, freedom of speech had to be reined in. Even in supposedly liberal Britain, William Pitt’s anti-revolutionary “reign of terror” of the 1790s was revived and intensified in the 1810s and 20s. In this episode, we see how European rulers weaved an intricate web of censorship and repression across the continent. We will discuss: