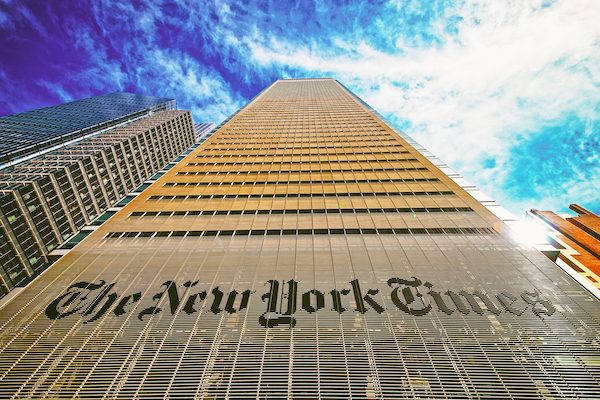 Last week, Emma Camp’s New York Times opinion piece about campus cancel culture attracted lots of attention — including the attention of a mob of detractors on Twitter. This week, another pro-free speech New York Times article, “America Has a Free Speech Problem,” this one from the paper’s editorial board, is making the rounds. Ironically, both pieces, which argue that a free speech culture of shame and blame exists and is, broadly, undesirable, have been met with some uncharitable responses that only lend more legitimacy to their claims.

In “America Has a Free Speech Problem,” the New York Times Editorial Board unpacks the results of a poll conducted by New York Times Opinion and Siena College. The poll, which FIRE explores in-depth in a separate post today, reveals that broad swaths of Americans feel less free than they did 10 years ago to express opinions, with over half reporting having “held their tongue” during the past year because of “concern about retaliation and harsh criticism.”

Based on these findings, the editorial board argues that a culture of shaming and shunning has taken root in the U.S. and that this is bad for democracy, diversity, and individual flourishing.

“[T]he old lesson of ‘think before you speak,’ has given way to the new lesson of ‘speak at your peril,’” they write. “Freedom of speech and expression is vital to human beings’ search for truth and knowledge about our world.”

As if in a concerted effort to prove the article’s point, some critics competed to interpret it as uncharitably as possible, drawing a false equivalency between criticizing a culture that normalizes shame — which the editorial board did — and wishing to revoke the rights of those who participate in the shaming — which the editorial board did not do.

What drew the most ire — from good- and bad-faith critics alike — was the editorial board’s opening characterization of the right to speak “without fear of being shamed or shunned” as a “fundamental right.”

One critic tweeted, “Uh… Nobody ever had the right to speak freely in America without the possibility of being [shamed] for that speech… Content is everything. Say something reprehensible and other Americans have the right of expression (speech) to shun or shame that person for saying so.”

There is no contradiction between upholding the legal right to free speech for everyone — even shamers and shunners — and advocating for a culture with less shaming and shunning.

“There is absolutely no such thing as a ‘fundamental right’ to voice your opinions in public ‘without fear of being shamed or shunned.’,” says another response. “This is lunacy.”

Many who take issue with the description of free speech as a “fundamental right” seem to conflate the terms “fundamental” and “legal,” interpreting the piece as arguing that people possess — or should possess — a legal right not to be shamed or shunned. Though this interpretation is understandable based on a cursory reading, nowhere does the article actually claim this. Were critics to read beyond the first paragraph, they would encounter these lines, in which the authors specifically address the distinction between free speech as a legal right and as a fundamental right, as it is popularly conceived:

It is worth noting here the important distinction between what the First Amendment protects — freedom from government restrictions on expression — and the popular conception of free speech — the affirmative right to speak your mind in public, on which the law is silent.

Clearly, the popular conception, or affirmative right to free speech, not the legal right, is the article’s primary concern. Through this lens, it is not difficult to see the validity of the argument that shaming and shunning undermines this right.

Despite this, some believe that free speech advocates should stick to protecting the legal right to free speech and refrain from expressing opinions on the impact of particular behavior on culture. “Are you fucking kidding me?” tweeted Michael Hobbes. “In an article chock-full of panicked ‘self-censorship’ tropes, the Times explicitly tells [sic] says you should show ‘self-restraint’ instead of criticizing people on social media. Which is it guys?!”

Mischaracterization of the Times piece aside, there is no contradiction between upholding the legal right to free speech for everyone — even shamers and shunners — and advocating for a culture with less shaming and shunning. It is absolutely the place of free speech advocates to work toward a culture hospitable to more expression. After all, legal protection of speech is of limited comfort in an environment where crushing social pressure stacks the deck against unacceptable opinions, and where professional consequences befall many who do share unpopular or unorthodox takes.

The editorial board argues that a culture of shaming and shunning has taken root in the U.S. and that this is bad for democracy, diversity, and individual flourishing.

In case this still isn’t clear: Critics are correct to point out that Americans have a right to shun and shame. Public humiliation, social ostracism, and character attacks often do constitute free speech. They are allowed, and should remain so. But the question isn’t whether they’re legal: It’s whether they’re desirable, whether they foster a culture in which we’d like to participate, whether they should be encouraged or discouraged, incentivized or disincentivized.

Problems posed to free speech by a repressive culture are not new, and can be just as real and threatening as problems posed by legal restrictions. “When society is itself the tyrant . . . its means of terrorizing are not restricted to the acts which it may do by the hands of its political functionaries,” wrote John Stuart Mill in 1859 in “On Liberty.”

The Times’ poll asks, “How much of a problem is it that some Americans do not exercise their freedom of speech in everyday situations out of fear of retaliation or harsh criticism?”

Maybe we should take their concern seriously.