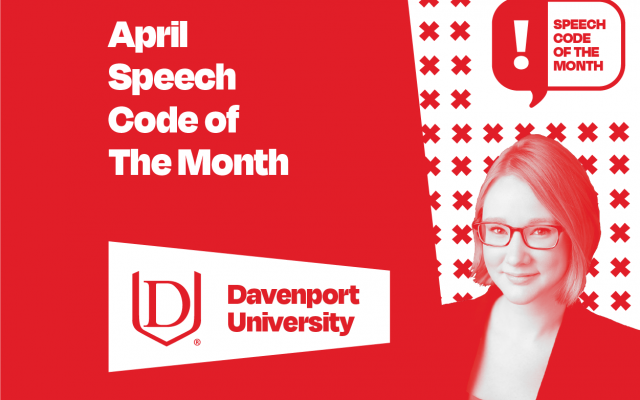 Preparing for a student protest at Davenport University, a private university in Michigan, is simple: Bring blank poster board, don’t brainstorm any clever chants, and don’t prepare talking points or speeches. After all, if your speech offends someone, you could end up suspended.

On second thought, it’s safer not to protest at all.

Every month, FIRE highlights a university policy that hinders students’ free expression. Because Davenport’s Student Code of Conduct promises free speech rights, and then bans “offensive language” and “hate speech” at protests — subjective terms that could be applied to most protests — we’ve made it FIRE’s Speech Code of the Month for April.

As a private institution, Davenport isn’t bound by the First Amendment like public schools, but it states in official policy that it “supports students’ right to free speech.” However, in that same policy, it also says student protests can’t include “offensive language” or “perpetuate hate speech.”

Under First Amendment standards, speech cannot be restricted in a public forum or limited public forum on the basis of its viewpoint. Banning offensive and hateful speech constitutes viewpoint discrimination, as these terms are entirely subjective — what one person finds to be offensive or hateful may not be so to another.

Calling someone a damned fascist, wearing a jacket with a profane message on it in a public place, printing a newspaper that depicts the Statue of Liberty being raped by police, and registering a trademark that includes a racial slur could all be called offensive or hateful, but the Supreme Court has held that speech may not be limited on those bases alone.

Davenport claims it supports students’ right to free speech, but free speech includes speech that offends others. That the university’s ban on offensive or hateful expression applies to protests is especially concerning, as speech at a protest is often meant to provoke emotions in order to engage passersby and communicate an important message.

[Free speech] may indeed best serve its high purpose when it induces a condition of unrest, creates dissatisfaction with conditions as they are, or even stirs people to anger. Speech is often provocative and challenging. It may strike at prejudices and preconceptions and have profound unsettling effects as it presses for acceptance of an idea.

Indeed, protests on campus often use jarring imagery and offensive language on signs and in chants; various groups employ these tactics, for example, at pro-choice or pro-life events, or at rallies supporting Israel or Palestine. Allowing administrators to determine which protests are too offensive or hateful to be permitted on campus does not amount to support for free speech.

Davenport was one of the schools included in FIRE’s “State of the Speech Codes: Michigan” report, released last week. Michigan, we found, fares poorly against its peers: 26.9% of reviewed schools earn a red light rating for maintaining at least one policy that clearly and substantially restricts free speech, while nationally, only 18.5% earn this rating. Davenport earned the red light rating for maintaining this restrictive policy, as well as an overbroad harassment policy.

FIRE encourages Davenport, as well as the rest of the schools included in our “State of the Speech Codes: Michigan” report, to work with us to develop policies that truly support students’ free speech rights.