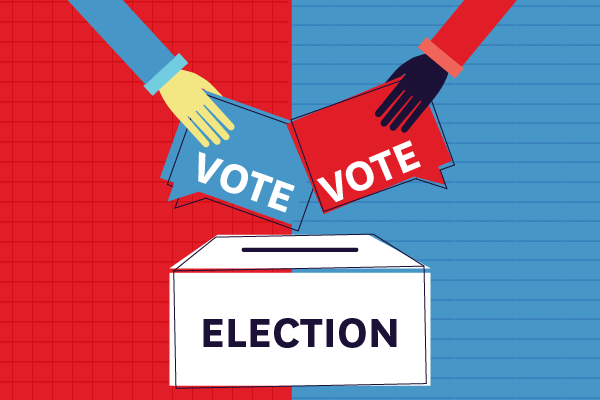 As the nation’s eyes turn to the swing state of Pennsylvania on Election Day, there’s one place they won’t see campaign signs: in students’ windows at Susquehanna University.

Last week, a cross-partisan group of student organizations — the university’s chapters of the College Democrats, College Republicans, and the libertarian Young Americans for Liberty — joined in an open letter objecting to the university’s mandate to remove their signs:

On the evening of Oct. 27th, we were instructed to remove our political signs from out front our 18th Street townhouses and were told we could not display them in any publicly viewable windows. This did not just affect us, but all residence halls on campus.

While it is perfectly clear that SU has full discretion in the policy to request removal of any outdoor decorations, having political decorations inside has no such limitations in the student handbook. We were further informed that this policy had always existed, but never strictly enforced. This was changed just recently due to “safety concerns” with houses/rooms potentially being targets during and after election night.

As the presidents of the SU Democrat’s Club, SU Republican’s Club, and Young Americans For Liberty, we cannot and will not accept such unjustifiable limitations on our rights to free speech. We stand united past the political divide to challenge and urge the administration to swiftly change its decision which, if left unaltered, could have harsh future consequences on our student free speech rights on campus.

In response to this letter, Susquehanna’s administration countered that its status as a tax-exempt institution requires it to suppress student political expression:

Susquehanna University wants its students and employees to participate in the political process, but we are drawing the line at allowing students, or employees of the university who reside in university owned residences, including the president, from outwardly displaying partisan political signs. We believe that allowing such a practice [is] confusing to the public and can imply that the university is endorsing a candidate or political party. Our grounds and buildings were purchased with or built with donations exempted from taxation or financed with bonds that also enjoyed tax-exempt status. The tradeoff is that by using the benefits of tax exemption, we are prohibited from being involved in political activity.

Every election cycle (and sometimes after they conclude), FIRE sees universities and colleges make this same mistake, interpreting their obligations as tax-exempt entities as requiring the suppression of students’ partisan political expression.

Not so. As we explained in a letter to Susquehanna University on Friday — and as we explain every election cycle in our Policy Statement on Political Speech on Campus — students’ political expression is unlikely to jeopardize institutions’ tax-exempt status.

Members of the public generally understand that college campuses are places of diverse and divergent student discourse. No reasonable person would believe that a university or college has chosen to announce its endorsement for the highest office in the country by placing a campaign sign in a student’s dormitory window. Instead, they’d see it as the speech of students, not the institution. Student speech is not reasonably attributable — by the public or the courts — to the institutions where they study, and providing open avenues for speech does not mean every message bears the “imprimatur” of the institution. Protecting students’ freedom of expression protects not only the student’s right to speak but also shields the institution from liability for that speech.

It is especially unlikely that student speech will be attributed to the institution if students of differing political camps — like the three different student groups allied in defense of free speech at Susquehanna — can support opposing candidacies. If competing signs in dormitory windows endorse Biden, Trump, and Jorgensen, how could a passerby possibly be confused into thinking that the signs represent the institution’s endorsement?

Administrators fretting over their institution’s tax-exempt status do not need to take our word for it. In 2002, the Internal Revenue Service explained that the “actions of students generally are not attributed to an educational institution unless they are undertaken at the direction of and with authorization from a school official.” In other words, unless a university official is telling students to post campaign materials, the students’ expression is not likely to be seen as political activity by the institution itself.

Because it’s a private institution, Susquehanna University isn’t required by the First Amendment to grant its students freedom of expression. But it promises students — and its accreditor — that students do enjoy free speech. To keep those promises, its administration should reconsider its position — today — and facilitate, not suppress, students’ participation in the political process. If not, then hopefully other institutions will learn from Susquehanna’s mistake.

You can read FIRE’s full letter to Susquehanna University here:


Update (Nov. 9, 2020): Susquehanna University responded to FIRE’s letter on Election Day, refusing to rescind the policy and arguing that students could “display signs in the privacy of their rooms.” FIRE responded with a second letter to Susquehanna University the same day, reiterating that the university’s policy is not justified by IRS regulations.