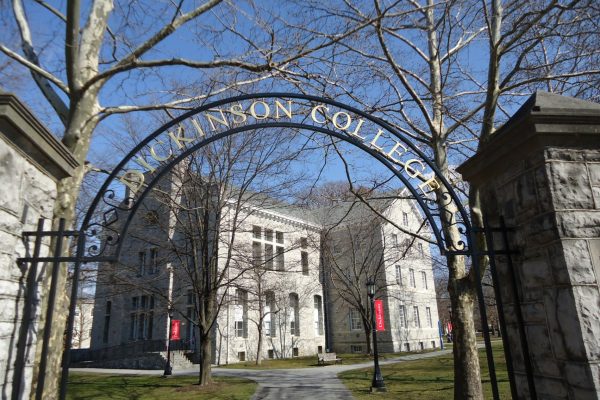 Earlier this month, Dickinson College’s administration and security officials sought to identify the anonymous operator of an Instagram account, “menofdickinson,” while asking Instagram to remove the account. In response to a letter from FIRE, the college has committed that it will not discipline any student responsible for the account, but defended its efforts to investigate and identify its operator, claiming that it was required to do so by federal law. (It wasn’t.)

The Dickinson student newspaper, collecting screenshots of a number of posts from the account, reported that the account was created in the wake of student protests criticizing the college’s response to sexual assault — protests that ultimately led Dickinson’s administration to agree to some of the changes urged by students.

Phrases in the now-deleted “menofdickinson” tagline (“Empowering men since 1783” and “Made for men and woMEN”) were borrowed from a “womenofdickinson” account (“empowering women since 1783” and “made for women and feMENists”). The former account was populated with, as described by The Dickinsonian, “misogynistic content” consisting of memes and images about sexual assault allegations, wife beating, and women’s rights.

As students sought to identify the anonymous person responsible for the “menofdickinson” account, Dickinson’s Vice President of Institutional Effectiveness and Inclusivity, Brenda Bretz, told the student newspaper the college’s administration was pulling out all the stops to join the effort:

The first [action taken] was that Dickinson contacted Instagram “requesting they take down the site,” Bretz said. Because of the nature of the account, the Department of Public Safety (DPS) also have “attempted to identify the owner of the account,” according to Bretz.

Title IX Coordinator Kat Matic also verified this. “We asked the college’s General Counsel to contact the company to request they take down the account; we have responded to students, faculty, staff, and alumni and provided information on support services and resources,” she said.

Bretz also said that because this is an ongoing investigation, “I cannot share the progress on that other than to say that every legal and authorized avenue is being pursued to identify the owner of the account.”

As we explained in our letter to Dickinson’s leadership, that response was at odds with the college’s policies laudably committing Dickinson to respecting its students’ freedom of expression, even if it is offensive to others. For example, Dickinson’s technology policies — which ostensibly apply to online speech — provide that Dickinson is “fully committed” to freedom of expression. Likewise, its bias reporting policies explain that while some speech may be viewed as “hate speech,” its “offensive or inflammatory” nature — or the fact that it is “distasteful, hateful and offensive” — does not render it a violation of the college’s regulations, so long as it does not “incite imminent violence or other criminal activity . . . against the group in question.”

Dickinson’s written policies largely get the issue of free speech right: Speech may be deeply offensive, even viewed as hateful, but — at a private institution that, like Dickinson, promises to protect speech — it’s protected unless it amounts to something more, like a true threat or imminent incitement. The publicly-available Instagram posts, since deleted, likely offended many, but they didn’t approach those narrow limits on freedom of expression.

The choice to remain anonymous has also long been protected by principles of freedom of expression. As the Supreme Court has explained, speakers may choose to remain nameless due to “fear of economic or official retaliation, by concern about social ostracism, or merely by a desire to preserve as much of one’s privacy as possible.” That doesn’t bar other students from endeavoring to identify an anonymous speaker, nor does it shield the speaker from social consequences if he or she is revealed. However, administrators and police should not use official college resources to try to unmask the speaker.

To its credit, Dickinson’s response to FIRE’s letter pledged that the college would not discipline the operator of the account. However, the college defended its efforts to identify the student, arguing that its efforts were not just appropriate, but required by federal law, citing the requirement that institutions not be “deliberately indifferent” to hostile environment harassment:

While we can debate ad nauseum whether or not the Instagram account in question was offensive, if the account was left unchecked it was certainly headed down a severe and pervasive path of dialogue about beating and killing female students, especially those involved in the early February 2020 Title IX campus protests. In fact, Title IX concerns were raised after the ‘menofdickinson’ Instagram site, which surfaced shortly after the campus protests, by students who were involved in the protest and related campus reform efforts. To simply ignore these concerns in order to stand true to free speech and expression virtues would be tantamount to acting deliberately indifferent to these valid concerns.

But, as the Supreme Court’s decision in Davis v. Monroe County Board of Education, cited by Dickinson, holds, speech must be not only “severe, pervasive, and objectively offensive” (emphasis added), but sufficiently so that it “effectively denie[s] equal access to an institution’s resources and opportunities.” Even if everyone agrees that the speech is objectively offensive, more is required before it amounts to an actionable hostile environment. In any event, when an institution is confronted by — as here — expression falling short of hostile environment harassment, it does not have to do nothing in response, but should exercise options that do not involve reneging on its commitment to freedom of expression. There are other ways to respond, such as through responding with more speech, connecting aggrieved students with campus resources, or through organizing educational programming that addresses the underlying issues. “More speech” is what colleges should be best at, and it’s the preferred remedy for offensive speech — not censorship.

Unfortunately, Dickinson’s response indicates that its administration doesn’t view its commitments and policies as binding on the college, but instead merely reflections of how it aspires to the “virtues” of freedom of expression “as much as reasonably prudent.” If Dickinson takes a “rules for thee, but not for me” approach to its express commitments to freedom of expression, what value is its commitment to other policies?