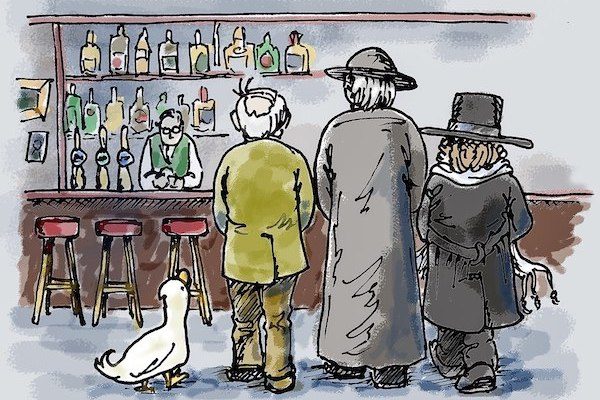 I don’t yet have my degree nor have I driven a cab, but I have tended bar. In summer 2021, before starting my first year at Tufts University, I worked at a sports bar in Brooklyn. Being new, I was often assigned the slower day shifts, where some of our friendlier patrons engaged me in some of the most educational conversations of my life.

One of these patrons was John (not his real name), a middle-aged Africana Studies professor at a private university. He didn’t drink, so I suspect he enjoyed the bar for the same reason I did: The chance to meet people he usually wouldn’t, in a congenial place free from judgment.

A black man from Harlem, John would often talk about the many times he had been stopped and frisked by the police. He even said he was once beaten up by officers because they misidentified him as the perpetrator of a violent crime. He experienced racial profiling, and believed that many cops were more violent toward young black men. Still, he didn’t think most cops were racist, and he appreciated those who endeavored to actively participate in community relations.

When I asked if he had shared all of this with his students or other faculty, John surprised me by saying he had not. He was legitimately worried that some of his views would get him in serious trouble with his students or the administration. Turns out, he was right to be worried. Over the past seven years, FIRE has documented more than 500 instances of faculty being targeted for protected speech.

If a respected professor doesn’t feel comfortable sharing his unfiltered opinions on race and policing while teaching a course about how race impacts policy, how can anyone feel comfortable discussing controversial topics on campus?

Through the painless acts of listening and being curious, I was able to engage and learn from two wildly different individuals with unique perspectives, deepening my understanding of a complicated topic.

John’s opinions were very different from Tony’s, an imposing brick wall of a human being who has worked as a bouncer at a Manhattan dive bar for 20 years.  Tony, who is also a black man, has a very different perspective on law enforcement that was mainly informed by his experiences at his security job. Working as a bouncer led to many altercations where he feared for his safety and had to call the police, leading him to hold views of law enforcement that were mostly positive.

Whereas free speech on college campuses is under threat, my conversations with John and Tony were examples of free speech culture at its best — people in a diverse society free to respectfully share and discuss their views. Approaching the start of my freshman year at Tufts, I was interested to see if my classmates would be as open about their views as my former patrons were.

According to FIRE’s 2021 Free Speech Rankings, Tufts ranks 137th out of 154 American universities. Aware that my school was somewhat infamous for suppression of speech, I was already prepared for a certain degree of censorship.

During December of my first semester, Tufts earned itself FIRE’s Speech Code of the Month for requiring students to obtain permission before soliciting or approaching someone for any reason. Though Tufts is a private school, this policy clearly runs counter to First Amendment principles and Tufts’ own stated commitment to free speech. The best way to combat policies like these is to bring them to light. Motivated students and organizations like FIRE are working to expose such policies and fight them publicly.

At Tufts, I felt a pervasive atmosphere of chilled speech where students were never explicitly told what they could not say, but implicitly recognized that certain topics were off limits.

Not even the Tufts cannon, the painting of which is one of Tufts’ oldest traditions and is rooted in free expression, is immune from free speech controversies. Earlier this year, the Tufts chapter of Students for Justice in Palestine painted the cannon in order to promote an event. Within a week, the cannon had been repainted, which is not unusual. But Tufts SJP lodged a formal complaint alleging that in this case, the repainting was an act of “blatant racism.” Such a complaint could have led to the punishment of their fellow students for exercising the same free speech rights Tufts SJP did when they first painted the cannon. The administration investigated, but to its credit decided not to take further action.

What surprised me about the free speech climate at Tufts was how many of my peers seemed to propagate or at least ignore the culture of censorship on campus. Silence on these issues is in some ways worse than campuses that have publicized, high-profile free speech battles. At Tufts, I felt a pervasive atmosphere of chilled speech where students were never explicitly told what they could not say, but implicitly recognized that certain topics were off limits. It was a jarring shift from the open atmosphere of the bar to a place where most of my peers seemed to accept a culture where certain topics and viewpoints were taboo.

John and Tony’s willingness to talk openly about topics as controversial as race and policing illuminates the merits of free speech and the tragedy of censorship across American campuses. They both felt comfortable talking to me, a random 18-year-old working at a bar, about their beliefs, simply because I was their bartender. Through the painless acts of listening and being curious, I was able to engage and learn from two wildly different individuals with unique perspectives, deepening my understanding of a complicated topic.

This is what America is meant to be. Our society is supposed to be full of places where we can talk about and learn from our differences. Emulating the openness and collegiality that can make bars a haven for discourse is enough. Like John and Tony, we should lean into curiosity instead of judgment, listen instead of ignore, and allow new ideas to flow freely.

Sam Ben-Ur is a rising sophomore at Tufts University and a FIRE Summer Intern.