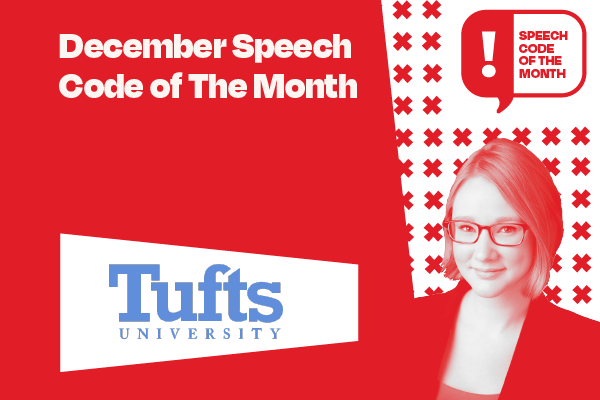 Last week, FIRE released our annual Spotlight on Speech Codes report, which covers the speech code ratings of 481 colleges and universities in our Spotlight database and discusses trends from the past year.

We were glad to see the number of schools earning our worst, “red light” rating continue to decline, but public schools are making far greater strides than private ones. For example, of the 20 schools that improved their ratings, just six were private institutions.

Private colleges aren’t bound by the First Amendment the way public ones are, but the vast majority of them (and all those evaluated in our report, other than the seven that earn a Warning rating) promise their students free speech rights. In spite of those commitments, only 3.7% of private institutions rated by FIRE earn a “green light” rating for maintaining policies that do not imperil free speech.

Tufts University is one of the 96.3% of private universities that fall short. Among several other speech codes, it states in its code of conduct that students must receive advance permission before engaging in any solicitation on campus, including “political leafleting.” A blatant restriction on students’ free speech rights, we featured the policy in the section on prior restraints on speech in our report, and we have now made it FIRE’s Speech Code of the Month for December.

Tufts’ policy on “Promotions, Solicitations, and Gatherings on Campus” has several problems. First, it allows for the chalking of messages on campus, but says chalking can’t include “profanity or explicit sexual material.” Universities are not required to permit chalking on their campuses, but when they do allow chalking, First Amendment principles dictate that regulations on those messages need to be viewpoint-neutral. Banning any subjectively profane or sexually explicit material includes a great deal of protected speech, and is hardly viewpoint-neutral.

The policy gets worse from there, stating: “The University, through the Office of Campus Life, regulates, and issues permits for all commercial activity and/or solicitations on the campus.” Commercial speech may be regulated more stringently than non-commercial speech under First Amendment standards, but the policy goes on to say that these activities include “political leafleting or solicitation,” as well as “solicitation for any purpose.”

Solicitation for any purpose sure sounds like it would include non-commercial solicitation, like advocating for a particular political position or seeking new members for a student group.

Tufts’ requirement to obtain a permit before engaging in core protected speech — political leafleting — flies in the face of its commitments to free expression.

The policy then flatly states, “All groups must receive permission from the director of the Office of Campus Life before engaging in the above activities on university property.” As a result, the policy creates a chilling prior restraint on speech.

The Supreme Court, in striking down a town’s ordinance that forced those who wish to engage in door-to-door advocacy to first receive a permit, wrote in Watchtower Bible and Tract Society of NY, Inc. v. Village of Stratton: “It is offensive—not only to the values protected by the First Amendment, but to the very notion of a free society—that in the context of everyday public discourse a citizen must first inform the government of her desire to speak to her neighbors and then obtain a permit to do so.” Tufts’ policy poses this exact problem.

Again, as a private university, Tufts isn’t bound by the First Amendment. But it promises students expressive rights, so it’s reasonable for students to assume First Amendment case law establishes the relevant standards, and that Tufts will follow them.

Instead, Tufts’ requirement to obtain a permit before engaging in core protected speech — political leafleting — flies in the face of its commitments to free expression. The school states in official policy that “[f]reedom of expression and inquiry are fundamental to the academic enterprise,” and that without these freedoms, “community members cannot fully share their knowledge.” FIRE agrees and encourages Tufts to revise this policy to allow  students to conduct leafleting and other non-commercial solicitation without first obtaining a permit.