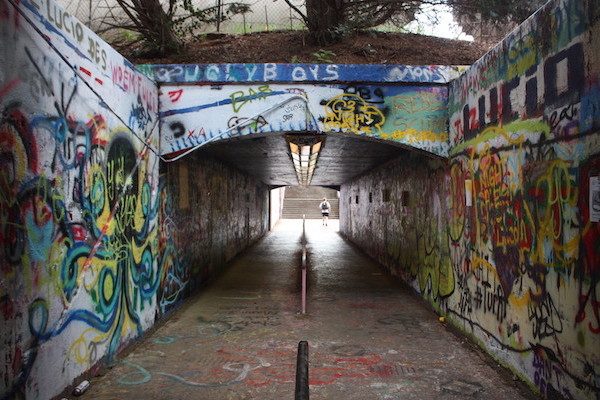 Landmarks specifically designated for free expression — where students can paint, speak, or display their viewpoints for all to see — have existed on campuses across the country for decades. In recent years, however, FIRE has seen a rise in investigations and surveillance of unpopular expression by colleges and universities in these supposedly “free” areas.

The most recent contender, Duke University, has police investigating messages painted on its Free Expression bridge and tunnel, a forum that has been dedicated to free and unfettered expression for decades. What those messages said, specifically, isn’t clear — reports only describe them as “anti-Black” and “homophobic.” But police may have an easier time identifying the anonymous speaker, whatever their message: Duke has installed security cameras to surveil its Free Expression Bridge and monitor who is painting messages on the bridge.

The practice of surveilling the bridge is both unethical and contravenes its promises of free expression.

FIRE wrote Duke on Thursday explaining that because it has designated the bridge for free expression, police efforts to investigate painted content or unmask anonymous speakers because of their message is contrary to Duke’s longstanding commitment to freedom of expression. These actions obviously threaten students’ ability to exercise the right to anonymous expression. When the authorities have planted cameras to help them catch and punish people engaging in officially disfavored expression, it’s hard to see how that expression is in any sense “free.”

Although Duke is a private institution, and thus not bound by the First Amendment, it has made clear promises to its students that they enjoy expressive rights, and Duke must keep these promises. In fact, Duke is one of the few universities across the country to earn FIRE’s highest “green light” speech code rating, which means FIRE is not currently aware of any written policies that pose a serious threat to free speech rights on campus.

Duke’s policy governing expression on the Free Expression Bridge reflects these commitments, promising that “[i]ndividuals and student groups may express opinions within this area that are not restricted by content, except by legal standards.”

Consider these questions as you plan to paint:

Duke asks students to consider these questions before adding content to its Free Expression Bridge; however, Duke also emphasizes “there is no restriction on the content” permitted on the bridge. Even if the content is in bad taste, offends or targets a group of people, could appear harmful, or would not be appreciated by visitors, messages may be painted in this area designated to free expression.

Although the recent messages added to the bridge that spurred Duke to action were not disclosed by the university, it is unlikely they fall into any of the “legal standards” for unprotected speech, which are very narrow. While it’s not impossible, neither Duke’s statement nor any of the news reports about the expression suggest they might fall into any such category. And so long as the messages on the bridge do not fall into one of the narrow categories of unprotected speech, such as true threats and incitement, Duke’s efforts to unmask and investigate the authors or their messages — using its police department, no less — are inconsistent with Duke’s promises and policies.

The investigation into painted content and the use of surveillance cameras to monitor the bridge threaten the ability of students to exercise their right to engage in anonymous expression—however unpopular or offensive their protected speech may be to others—as guaranteed by Duke’s commendable promises of free expression. We call on Duke to end its investigation into content painted on the bridge and to remove the surveillance cameras.

Duke need not remain silent when it learns of speech others find offensive, but keeping a constant eye on anonymous speakers is not the way to protect speech.

The practice of surveilling the bridge is both unethical and contravenes its promises of free expression. Freedom of expression protects not only the right to speak, but to do so anonymously. Students may have any number of reasons to remain anonymous when adding messages to the Free Expression Bridge. For example, they may be concerned that the university will punish them for adding messages critical of social movements or the university itself. Because Duke has installed surveillance cameras and has checked the cameras to investigate anonymous expression, Duke has no doubt chilled students’ expression in a forum explicitly dedicated to free expression.

Duke is far from the only university that has attempted to punish or surveil expression on a landmark specifically designated for student expression. As my colleague Zach Greenberg wrote last year:

Of course, all universities are free to condemn hateful expression. But in their drive to create a more diverse, inclusive, educational community, they must recognize how closing avenues to student expression in response to distasteful speech harms these initiatives. The cornucopia of campus free speech landmarks serve as rallying points for student social justice movements — how exactly does fencing off these areas make campus a more tolerant place for students? Moreover, will universities seek to shut down listservs, bulletin boards, quads, and other open spaces merely because they are used to offend others?

Landmarks like Duke’s Free Expression Bridge have existed for decades to encourage freedom of thought and expression. Some of that may, no doubt, offend some students, administrators, donors, lawmakers, or the general public. But the purpose of these landmarks is undermined if police surveil and investigate protected expression. Duke need not remain silent when it learns of speech others find offensive, but keeping a constant eye on anonymous speakers is not the way to protect speech. We call on Duke and all other universities to stop suppressing speech in an effort to prevent speech it deems offensive or hateful.