Last week, the U.S. Court of Appeals for the Eighth Circuit sustained a First Amendment challenge to an Arkansas law requiring government contractors to pledge not to boycott Israel. FIRE joined with the Institute for Free Speech to file an amici curiae brief urging this result.

“Proponents of anti-BDS statutes should take note of their poor record in court.”

The decision in Arkansas Times LP v. Waldrip is the latest in a series of federal court rulings striking down statutes that target the Boycott, Divestment, and Sanctions (BDS) movement against Israel — statutes that have implications for free speech and protest movements at public colleges and universities.

Arkansas Act 710 of 2017 makes it unlawful for a public entity to “[e]nter into a contract with a company . . . unless the contract includes a written certification that the person or company is not currently engaged in, and agrees for the duration of the contract not to engage in, a boycott of Israel.” The statute broadly defines “boycott of Israel” to include not only “engaging in refusals to deal” or “terminating business activities,” but also “other actions that are intended to limit commercial relations with Israel, or persons or entities doing business in Israel or in Israeli-controlled territories.” 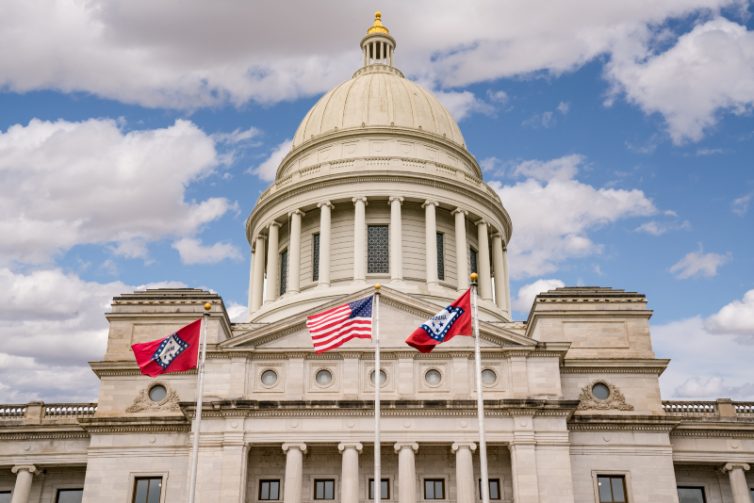 Pulaski Technical College, which is part of the University of Arkansas System, had for many years contracted with the Arkansas Times to run advertisements in the Times’ publications. In 2018, with Act 710 on the books, the parties’ negotiations to renew their advertising contract fell through when the Times refused to certify that it would not boycott Israel for the duration of the contract. The Times then filed a lawsuit seeking to block enforcement of Act 710. A federal district court dismissed the case on the ground that a “boycott of Israel,” as defined by the statute, is neither speech nor expressive conduct and, therefore, lacks First Amendment protection.

In a 2-1 decision, the Eighth Circuit disagreed:

Considering the Act as a whole, we conclude that the term “other actions” in the definition of “boycott Israel” and “boycott of Israel” encompasses more than “commercial conduct” similar to refusing to deal or terminating business activities. Instead, the Act requires government contractors, as a condition of contracting with Arkansas, not to engage in economic refusals to deal with Israel and to limit their support and promotion of boycotts of Israel. As such, the Act restricts government contractors’ ability to participate in speech and other protected, boycott-associated activities recognized by the Supreme Court in [NAACP v. Claiborne Hardware Co. (1982)]. Therefore, the Act imposes a condition on government contractors that implicates their First Amendment rights. [Footnote omitted.]

The court then turned to whether that condition is constitutional. As the court noted, a condition on the receipt of government funds that burdens protected expression may survive constitutional scrutiny where it “define[s] the limits” of the government’s spending program. But a funding condition cannot seek “to leverage funding to regulate speech outside the contours of the program itself.” The court concluded that Act 710 does exactly that by prohibiting the contractor “from engaging in boycott activity outside the scope of the contractual relationship ‘on its own time and dime.’” This restriction, the court held, violates the First Amendment.

“These decisions make clear that states may not subject their citizens to a political litmus test under the guise of regulating commercial activity.”

Proponents of anti-BDS statutes should take note of their poor record in court. The Eighth Circuit’s decision follows similar rulings over the past few years by federal district courts in Texas, Kansas, and Arizona, invalidating anti-BDS statutes on First Amendment grounds.

Preventing government censorship of political speech is the First Amendment’s core purpose, and these decisions make clear that states may not subject their citizens to a political litmus test under the guise of regulating commercial activity. To the extent that anti-BDS legislation pursues the latter goal, it must be carefully tailored to respect First Amendment rights.

FIRE has warned of the threat these laws pose to free expression and academic freedom at public colleges and universities. The Arkansas Times case itself involved a public college, as Act 710 expressly includes public colleges and universities in its definition of “public entity.” Notably, anti-BDS statutes jeopardize the ability of public schools and student organizations to host guest speakers. Although student organizations are not government entities, speakers whom they invite to campus often sign a contract with the university itself. Moreover, the Arkansas statute, like the one passed in Arizona, broadly defines “company” to include any “sole proprietorship, organization, [or] association.” This expansive definition risks sweeping under the statute’s coverage individuals who contract to speak on campus through a booking agency, nonprofit organization, or sole proprietorship.

FIRE takes no position on the BDS movement, except to the extent that an academic boycott could undermine academic freedom (by, for example, preventing students and faculty from engaging with Israeli scholars or institutions). Nevertheless, FIRE fully supports the right of students and faculty to voice any opinion on a boycott of Israel or any other country, and to listen to speakers on both sides of the issue.