Wagner visited a YAL campus event last Friday, talked to the students, and even added his own sidewalk chalk message to the array of student chalkings, reading: “EMORY STANDS FOR FREE EXPRESSION!”

The pro-Trump chalkings, which appeared on campus early last week, upset some students who said Trump’s name represents an anti-minority message that makes them feel “unsafe” on campus. Wagner initially vowed to “investigate” the chalkings, before walking that statement back amid public criticism.

Alex Reibman, president of Emory’s YAL chapter, said his group held the tabling event on campus last Friday where they asked students to sign a petition encouraging Emory to commit to free speech while also addressing true threats on campus. 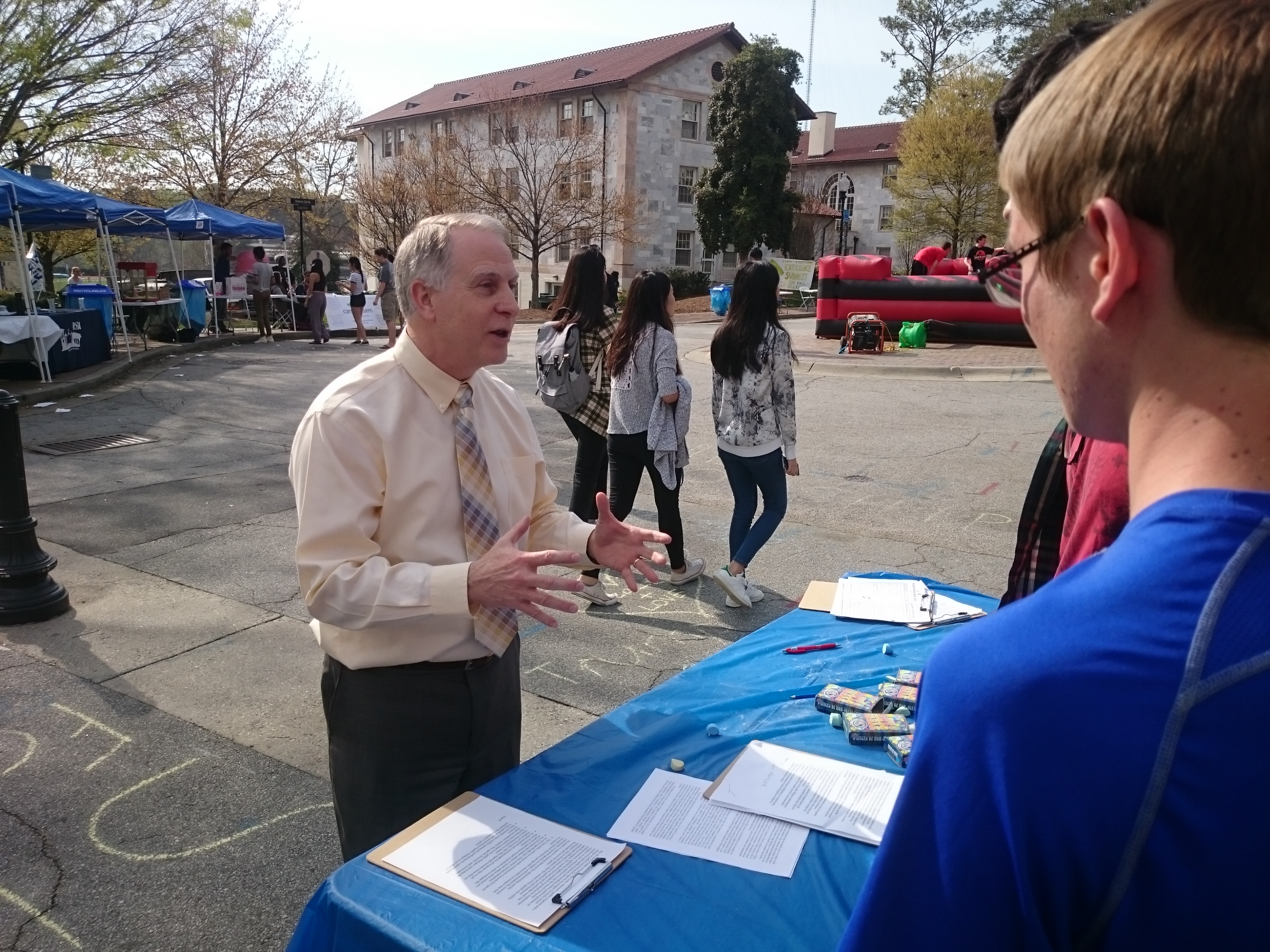 President Wagner himself stopped by (left) to talk about the Change.org petition, which asks Emory to “further engage in the public dialogue concerning the values of academic inquiry, free speech, diversity, and community inclusion,” and to “issue a public statement reaffirming its commitments to free speech as well as fostering of public dialogue in an effort to publicize the community’s values.”

Reibman said student signatories came from numerous campus groups and political ideologies, noting that a number of students who protested the Trump chalkings signed the petition.

“These [were] some of the students who have been using the hashtags on social media  ‪#‎1969not1836‬ ‪#‎BlackBrownAndHere‬,” Reibman said, noting that these students told him they felt Emory has also failed to vigorously protect minority speech. “They came as a group and told us that they agreed with what we were doing.” 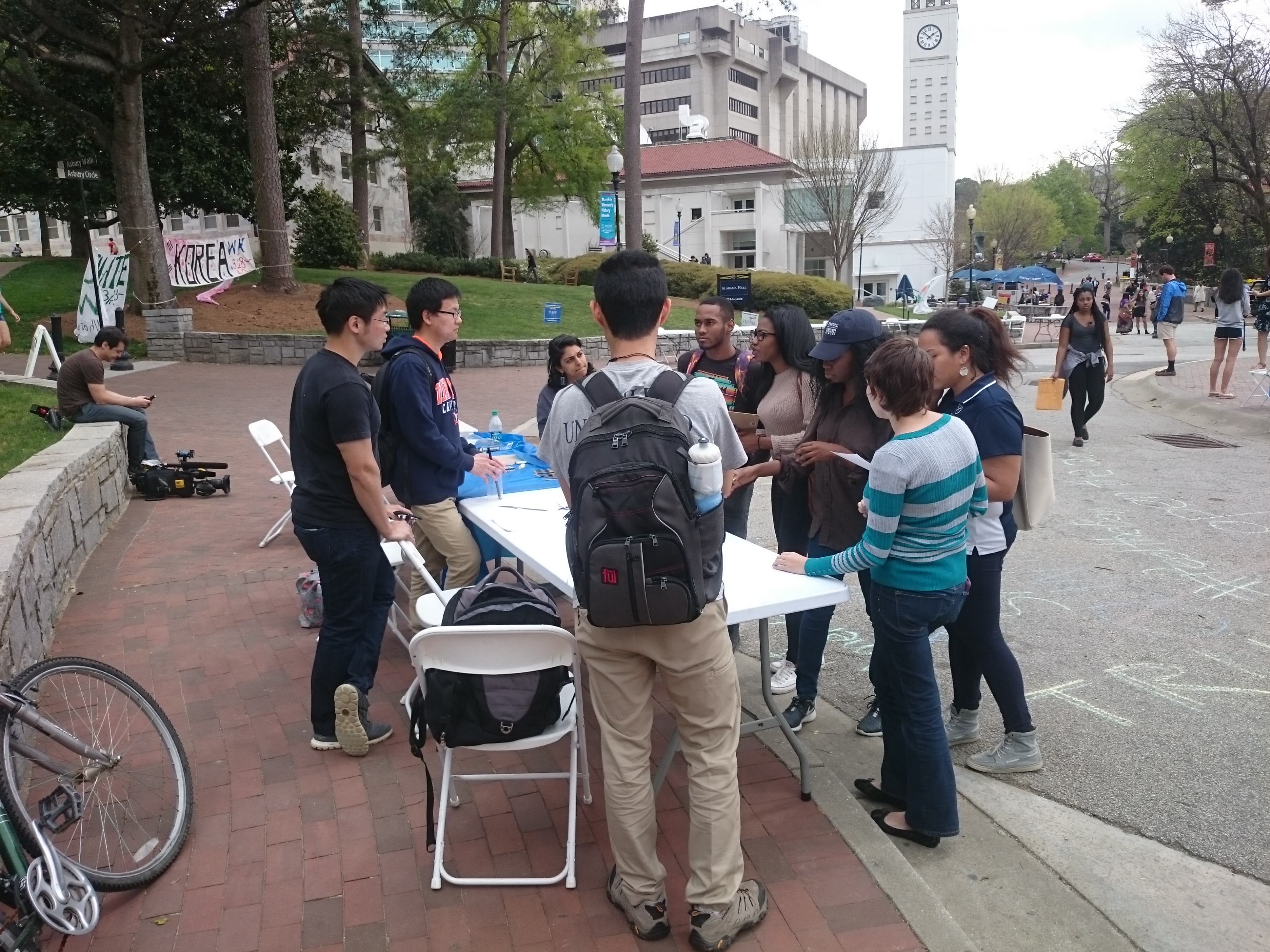 Separately, a group of Emory alumni have begun circulating an open letter asking their alma mater to officially recommit to free expression. The letter, co-authored by Matthew Walker, ’07, and Ed Thayer, ’05, is posted on the group’s Facebook page, Concerned Emory Alumni. The letter calls for “President Wagner and the full administrative body of Emory University to publicly acknowledge the intrinsic value of free speech and the right of all to engage in spirited political debate”:

No longer does Emory University serve as a beacon of intellectual diversity attracting some of the best and brightest young adults from across the world, much as it attracted us. Instead, Emory has become just another school in the well-documented pattern of universities that have surrendered to the demands of a vocal few that emotional comfort, ideological conformity and yes, “safe environments” trump fundamental notions of free speech. Critical thinking and exposure to other opinions are unwanted. But this does not have to be how the story ends. It is vitally important that we respond to this trend by reaffirming our foundational notions of freedom. Unfortunately, President Wagner and Emory University have thus far failed to rise to the challenge.

Walker, the letter’s co-author, told FIRE that as an Emory undergrad, being able to discuss sometimes divisive political issues with friends who disagreed with him was an important part of his education.

“It was always [a] great, friendly, challenging discussion that really taught you to critically think,” Walker said, noting the discussions helped to both hone his political opinions and prepare him for his career as an attorney. “I took that with me to law school where I was challenged more on my viewpoints. It’s really important to understand the opposing side and their arguments, where they’re coming from, and to form your own opinions. It’s formative. And it’s absolutely required, in my opinion, at the university level.”

Walker remembered that the 2007 shout-down of conservative activist David Horowitz during his own time at Emory “was the same trend we’re seeing today.”

“They protested. They shouted him down. They interrupted his speech,” Walker said. “That resonated with me. I saw that going on even back then.”

“My Emory experience, which I look upon fondly, was periodically defined by eruptions of illiberal behavior from various student groups, although nothing as shrill and totalitarian as we are witnessing today,” Thayer said, adding that Emory administrators used to err on the side of free speech. “Nowadays they seem inclined to appease the worst intolerant and alarmist instincts of some students, while undercutting the foundations of free speech, tolerance, and a robust debate, which should thrive at a university.

Matthew Walker, for his part, summed up the whole situation in one word: “Unacceptable.”

Emory alumni interested in sharing the letter or getting involved can do so through the group’s Facebook page or by contacting Matthew Walker (mbennett.walker@gmail.com) or Ed Thayer (ethayer3@gmail.com).

Students interested in learning more about the initiative by Emory’s YAL chapter can check out the group’s Facebook page.