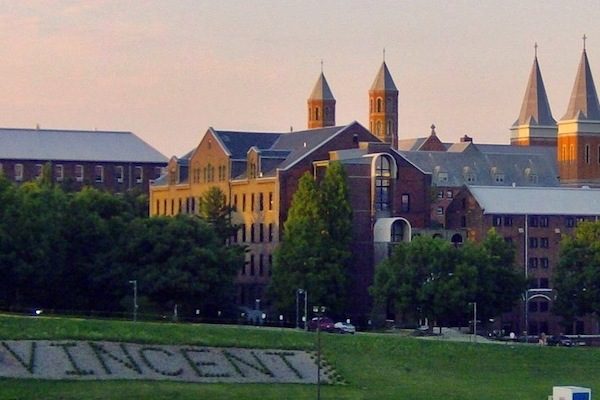 Today, FIRE wrote to a college’s accreditor to express concern that the institution is not meeting its obligations to comply with accreditation standards.

In one of the more flagrant departures from commitments to freedom of expression required by many accreditors, Saint Vincent College announced on April 19 that its president and cabinet would now review and approve all college-sponsored speakers to ensure “no message that contravenes [the college’s] core values . . . will be allowed.”

The college’s administration also staged a hostile takeover of its faculty-run Center for Political and Economic Thought, whose mission is to bring a variety of sometimes controversial viewpoints to campus. A CPET speech by Hillsdale College professor David Azerrad on “Black Privilege and Racial Hysteria in Contemporary America” appears to have sparked the crackdown on which views can be shared on campus.

We first attempted to raise our concerns directly with the college’s administration, sending a letter to the college explaining that these actions violate the free speech and academic freedom commitments Saint Vincent makes to students and faculty. The college could have corrected these issues or attempted to defend its action. Instead, it ignored its commitments and the letter, offering no response whatsoever.

⚠️: This might be the most extreme example of speaker-censorship FIRE has ever seen!

The dishonor goes to the president of @MySaintVincent who said he and his cabinet will now be in charge of giving the 👍 or 👎 to all college-sponsored campus speakers!https://t.co/Ls9G2eruxo

Saint Vincent College makes these commitments not only to its students and faculty, however. It also makes them to its accreditor, the Middle States Commission on Higher Education, which requires institutions to make and demonstrate commitments to academic and expressive freedom. It’s a serious commitment: Academic institutions must be accredited by an agency granted authority by the Department of Education in order to receive federal student aid.

In our third-party complaint, we alerted the commission that Saint Vincent is not in compliance with Standard II of Middle States’ Standards for Accreditation and Requirements of Affiliation. That standard requires, as a matter of “Ethics and Integrity,” that an accredited institution “possess[] and demonstrate[] . . . a commitment to academic freedom, intellectual freedom, [and] freedom of expression,” and that the institution in “all activities, whether internal or external, . . . honor its contracts and commitments, [and] adhere to its policies.”

Accrediting agencies, we reminded Middle States, “are often the last line of defense in protecting students’ and faculty members’ freedom of expression at institutions of higher education.”

In requiring prior review for speaker invitations and granting itself unilateral veto power over faculty members’ choices in invited speakers, Saint Vincent violates Middle States’ requirements. That policy is an astonishing departure from basic principles of expressive and academic freedom, which recognize that speaker invitations can’t be limited by viewpoint. (As courts have explained in the context of public universities, when colleges “open the lecture halls” to speakers, they must do so “nondiscriminatorily,” and allowing a university president to decide which speakers may be invited is “censorship in its rawest form.”) That’s flatly incompatible with Middle States’ requirement that institutions both make and demonstrate a commitment to academic and expressive freedom.

As we wrote to Middle States:

These actions negate faculty’s academic freedom by limiting their choices about what and how to teach on campus. They also limit the views that may be expressed and heard on Saint Vincent’s campus, giving a small group of administrators the power to decide which views are acceptable. These actions run directly counter not only to the college’s clear statements that free expression and academic freedom are among its core values, but also the promises it makes to the Commission by virtue of maintaining accreditation.

Accrediting agencies, we reminded Middle States, “are often the last line of defense in protecting students’ and faculty members’ freedom of expression at institutions of higher education.” Although Saint Vincent is not currently up for accreditation and does not have an evaluation visit scheduled until 2025, we urge Middle States to look into Saint Vincent’s willful departure from its stated commitments to expressive freedom — actions which contravene Middle States’ accreditation standards.

This would not be the first time Middle States intervened to ensure an institution’s compliance with its accreditation standards. As FIRE previously reported, Middle States, to its credit, intervened in 2016 when Mount St. Mary’s University fired two professors and solicited the resignation of a provost who criticized the president’s freshman-retention program. At the time, Middle States requested that the university provide “a supplemental information report . . . addressing recent developments . . . which may have implications for continued compliance” with accreditation standards.

FIRE is committed to holding institutions accountable when they violate student and faculty rights.

Similar action is warranted here, where faculty and students may choose to be silent instead of risking the ire of administrators who disagree with the opinions of those speakers whom students and faculty invite to campus. Additionally, those faculty and students will be deprived of the opportunity to engage with dissenting perspectives — an expectation which they may have on a campus that encourages community members to “remain open and quick to extend a big welcome to . . . fresh perspective[s].”

Nobody wants Saint Vincent to lose its accreditation. If its accreditation is jeopardized, that peril flows from the administrators who have consciously ignored opportunities to rectify their departure from Middle States’ standards. They should correct their errors now, rather than continue to imperil their institution’s reputation.

FIRE is committed to holding institutions accountable when they violate student and faculty rights. Higher education accreditors like MSCHE do important work of signaling that the institutions they accredit meet certain basic educational standards. The violations of those standards are clear in this case, and we are hopeful MSCHE will take steps to ensure Saint Vincent is truly worthy of its accreditation.