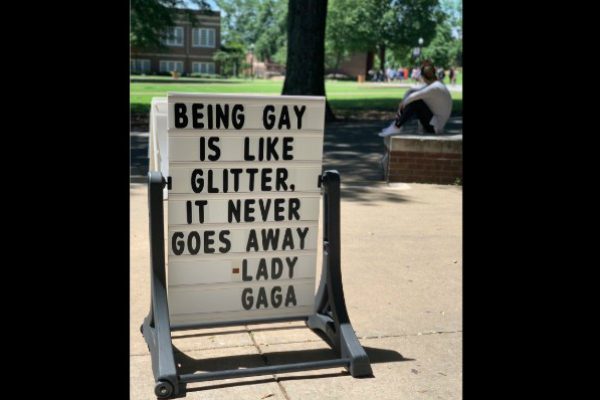 June marks LGBTQ Pride Month. Like many libraries and institutions across the country, the librarians at the University of Central Arkansas put together an exhibit of LGBTQ-themed books, in addition to the resources on their website. On a sandwich-board sign outside of the library, they added a quote from Lady Gaga, known for her LGBTQ advocacy and her “unofficial anthem of the LGBTQ community,” which she performed at the Super Bowl.

The library posted a photo of the sign on its social media accounts:

We love & respect all the LGBTQ+ members of our community.

Here’s a link to our LGBTQ+ resources libguide: https://t.co/gtUHWJW33a pic.twitter.com/Zg2xcaRoVq

The university’s president ordered the sign removed within one day, citing its status as a “university platform” that should not include “personal” viewpoints, and the possibility that it might be seen by minors.

The library at the University of Central Arkansas has a sign that it places outside. Sometimes the sign shows routine information, such as hours. At other times, the sign includes messages celebrating various months or days that are special to some groups at the university. This month, as part of the Pride celebrations nationally, librarians placed on the sign a quote from Lady Gaga: “Being gay is like glitter. It never goes away.” The library posted a photo of the sign to its Facebook page, with the message “We have so much love and respect” for “the LGBTQ members of our community.” The library included a link to its compilation of relevant resources on campus and in the area.

The sign was up for one day before President Houston Davis ordered it removed.

Amid criticism, Davis sent out a campuswide email Tuesday explaining his decision.

Wrote the president, “It is a core university value that we support our entire community and its diversity. Advocating for our LGBTQ community is not only appropriate but very important. I believe that the intent of the message was to show support for LGBTQ students, faculty and staff, but it was not OK for the university sign to be used to make a personal statement or advocate for a personal viewpoint. That is the line that the sign itself crossed. Unlike our student groups or other organizations, the library is an official arm of UCA and when it ‘speaks’ on that sign which serves information regarding library hours, it speaks officially. We do have to be very careful that we walk the fine line between individual freedom of speech and institutional voice.”

He continued by citing another problem he saw with the quote: “Timing of the sign in the summer also was considered. We have to be very mindful of the hundreds of minors that are on campus during the summer which further complicates an environment that is normally programmed for adults and our very meaningful conversations about ourselves and our world.”

Librarians at UCA are faculty members entitled to the full spectrum of expressive and academic freedom. That’s especially true in Arkansas, where the legislature recently passed — and the governor signed — a law discouraging its public universities from censoring campus expression, including by faculty members, that others might find inappropriate. University administrators should not be permitted to censor faculty members’ expression outside of a library (a public area of campus) related to an exhibit taking place within the library.

Today, FIRE sent a letter to UCA’s president, calling on him to rescind his censorship of the library sign and explaining how the First Amendment discourages such censorship at a public university:

FIRE will continue to monitor this case and hopes the university’s administration will proudly uphold its constituents’ freedom of expression.

Tell President Davis to respect faculty rights with the form below