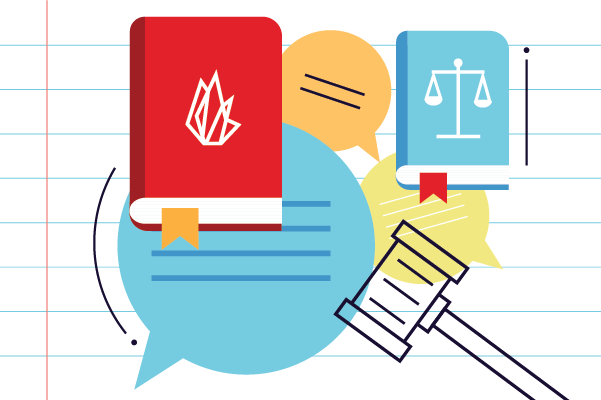 After years of work, FIRE is excited to announce that we’ve released our full Model Code of Student Conduct! Written to provide colleges and universities nationwide with policies that protect student rights, the code is a complete framework for a fair campus judiciary process and even complies with the Department of Education’s Title IX regulations released in May. Institutions are required to implement policies that comply with the regulations by Aug. 14.

FIRE’s model code includes a complete set of student conduct procedures, provisions for responding to Title IX allegations, and core procedural safeguards that are often missing during campus proceedings. As campuses grapple with how to reopen in the fall, the code also defines colleges’ jurisdiction to punish students for off-campus activities, such as failing to social distance.

“FIRE’s model code is intended to serve as the gold standard for clear and concise procedures that will help any university uphold students’ rights and adhere to government mandates,” said Zach Greenberg, a primary contributor to the code.

The need for a model code of conduct that clearly protects students’ constitutional rights becomes apparent when one considers the state of due process on campuses. FIRE’s annual Spotlight on Due Process report highlights how top universities routinely deny procedural safeguards such as the presumption of innocence, use of impartial fact-finders, participation of an adviser, and more. In fact, 49 out of the 53 universities reviewed received a grade of D or F for either their sexual misconduct procedures or their procedures for other non-academic misconduct charges. This means that they fully provide no more than 4 of the 10 elements that FIRE considers critical to a fair proceeding. Institutions that adopt the model code would earn an A grade.

Given the release of the new federal Title IX regulations, which will require many schools to make major adjustments to their due process protections, the model code could not come at a better time. While professional higher education consultants will charge schools thousands of dollars for advice on aligning their handbooks with federal policy, FIRE is distributing the Model Code of Student Conduct free of charge. We hope that administrators nationwide take this opportunity to both embrace the constitution — and frugality!

FIRE also encourages alumni and donors to reach out to their alma maters to share our model code and ask that it be adopted. We stand ready to assist any administrators who would like help adopting the code.

If every college took the simple step of accepting our free advice today, campuses will be a much better place for student rights and fundamental fairness in the fall.

The information contained in FIRE’s Model Code of Student Conduct does not constitute and is not intended to convey legal advice. This document is for general informational purposes only.