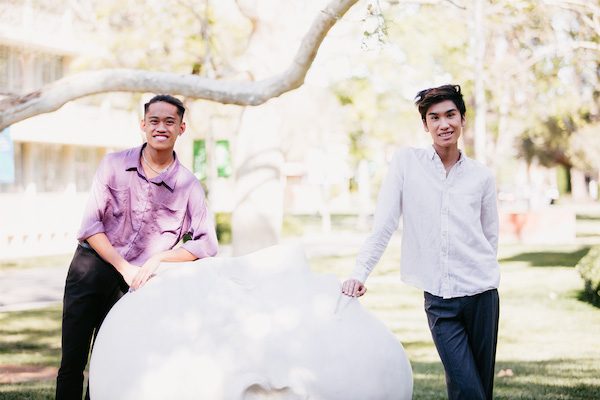 Students in need of a due process advocate at the University of California, Davis need look no further than their own campus, thanks to Devin Santiago-Vergara and Travis Haskin. This powerful student duo has built their school’s Student Advocate’s Office, or SAO, from the ground up over the 2021-22 academic year. UC Davis’ SAO works to ensure that students’ due process rights are upheld when they are accused of academic or behavioral misconduct. The SAO at UC Davis is a part of FIRE’s Student Defenders program, a network of student groups dedicated to upholding their fellow students’ due process rights.

The group’s rapid growth on campus has been catalyzed by Devin and Travis’ vision of a student advocate’s office that not only advises in misconduct cases, but also engages in community-building activities to fully support all members of UC Davis’ incredibly diverse student body.

At the end of the spring 2021 quarter, Devin became student advocate for the SAO. He inherited the office at the end of a rocky year of COVID restrictions and shutdowns that made it impossible for the SAO to get off the ground. He was one of five students who started the 2021-22 academic year as an SAO staff member.

The fall 2021 quarter was very intense for Devin — and all about laying the groundwork for the organization. He described the stress he felt at the time: “I remember thinking in the fall, we were so stressed, we were working over the summer, very small team — this was even before Travis was on board. It was only myself and four other people and we [thought], ‘We have no idea how to start this’ . . . and I was just so stressed. I [thought], ‘I don’t know what to do, I have no resources.’”

This was about the time when the FIRE Student Network reached out, and everything changed for Devin and the student advocates.

FSN provided resources to help the student advocate’s office get off the ground and worked with the office to get more students involved, prompting Travis to join the team as vice student advocate. The office also hired several other staff members, boosting their numbers from 5 to around 20.

Travis is very excited about the ways that the SAO has encouraged him to intertwine community-based work with due process work.

They went back to their campus and did exactly that.

Devin and Travis’ meeting during the fall quarter with UC Davis’ conduct office proved tense. The conduct office, called the OSSJA, refused to put the student advocate’s office intake form on their emails to students who are accused of misconduct and seemed reluctant to support student advocates in any other way. However, through a variety of outreach techniques, the Student Advocate’s Office was able to begin advising on cases at the start of the winter quarter without the conduct office’s support.

“We re-drilled into them that we’re not anti-university, we’re not trying to get students out of trouble,” Devin said. “Rather, our goal is to help the students navigate through the whole process and make sure they feel educated and informed . . . At the end of the day, we are really here . . . to support the students.”

During the winter quarter, the office focused on case advising, and Devin and Travis concentrated on preparing the new staff members they hired during the fall quarter to take on student cases. They implemented a case advising training program, which concluded at the end of the winter quarter, so the new staff members who participated in it are now fully empowered to take on new cases as the case load increases. 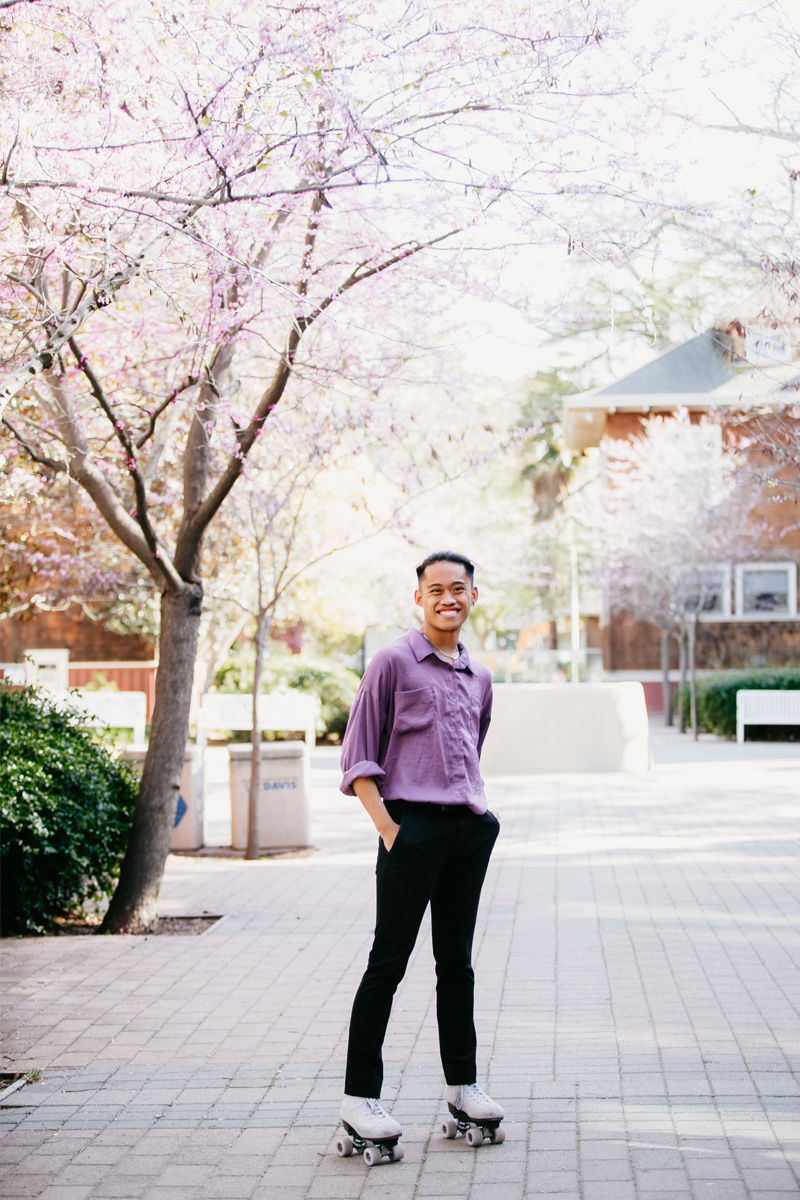 “That is something that I’m really proud of — that we were all able to create a space where you want to do the work you do and it’s rewarding and it’s fulfilling,” said Devin Santiago-Vergara.

While handling cases is a large part of what the student advocate’s office at UC Davis does, they do not encompass the full extent of its services. The SAO offers, in Travis’ words, a “holistic model of support” that seeks to supplement its case advising work with community-building work. This second part of the office’s role on campus has helped it not only to gain name recognition among the students, but also to increase the number of staff members within the office.

As a part of UC Davis’ student government, called the ASUCD, the SAO works with a number of other groups on campus to provide resources and support to members of the student population that need it most.  For example, Travis is currently collaborating with ASUCD’s Research and Data Committee to collect the campus community’s thoughts about how basic needs resources like The Pantry — UC Davis’ resource for students struggling with food insecurity — could be more culturally inclusive.

Before becoming vice student advocate, Travis was, and still is, an active member of the Ethnic and Cultural Affairs Commission. Because of his experience as part of the commission, one part of Travis’ role as vice student advocate is to work with other campus leaders to improve cultural awareness on campus.

Travis is very excited about the ways that the SAO has encouraged him to intertwine community-based work with due process work. “Having the opportunity to do that has been really cool,” Travis said, “because not only are we able to do case work, but we’re also able to [pursue ways] to help students [in] dire [situations], specifically with basic needs.”

The SAO’s work in the larger campus community, as well as their emphasis on meeting their staff members where they are, has also helped the group hire a diverse population of students to work in its office. “I feel like one of [our] greatest accomplishments [has been our ability to hire] a really good staff and create a really great environment,” Travis said. “Something that I feel like really does differentiate us [from other branches of student government] is the diversity . . . within our staff . . . and I think that all comes with experience and perspective.”

The student advocate’s office is a part of student government, but while most roles within ASUCD require a commitment level that is inaccessible for students who might need to get a job, for example, the SAO works with their staff to accommodate their needs. “So if a student or a person within our office is going through something,” Travis explained, “we accommodate them . . . We formulate an office environment [where]. . . if you can put in three hours one week, that’s great. If you can only put [in] one hour or 30 minutes and give your presence during a meeting, that’s good as well.”

Devin is full of praise and appreciation for the SAO’s staff who, he said, “work so hard,” and “want to do the work.”

“That is something that I’m really proud of,” said Devin. “That we were all able to create a space where you want to do the work you do and it’s rewarding and it’s fulfilling.”

Devin and Travis will continue their impressive due process work, anchoring it in conscientious community building.

Both Devin and Travis have high hopes for the SAO at UC Davis moving forward. Devin and some others on staff who have been part of the SAO since the beginning of its development in fall 2021 will graduate this spring, so Travis believes that one of the SAO’s next big challenges will be determining how to “transition that generational knowledge [to new staffers] to ensure the longevity of the office.”

Devin’s main goal for this academic year is “to lay down the foundation.” He is focusing on “set[ting] up everything so that whoever is the Student Advocate next year and [whoever holds] all of the positions, they have everything they need for everything to run smoothly as they progress . . . We want it to be sustainable.”

Another one of Travis’ goals for the group moving forward is to continue the SAO’s outreach work. “A big message that I took away from the conference,” Travis said, “is [that] there’s no ideal person to do outreach with. Everyone is your person that you need to market to. So we’re really trying to work on doing promotional materials like posters. Ideally we want to do some tabling . . . near one of our popular spaces at UC Davis and [have] that one-on-one conversation with students about not only what resources we offer but if students are willing to do so, how they can join our office and contribute as a possible member of student government.”

Devin and Travis will continue their impressive due process work, anchoring it in conscientious community building. They hope to see their cases continue to rise and their diverse staff continue to grow.

Devin hopes that the SAO will always continue to invest in the campus community and its many organizations, “so that they know we are a resource and we keep that relationship established and healthy so that after we term out and even after next year’s office terms out, there’s still a healthy and established relationship . . . that could sustain for years.”

Students who would like to learn more about FIRE’s Student Defenders program should check out the resources online and get in touch with us with any questions by emailing students@thefire.org.