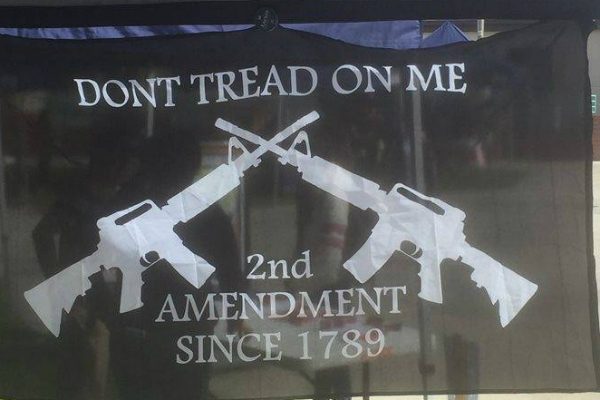 Members of Orange Coast College’s Young Americans for Freedom chapter expected to recruit fellow students for their club at a Feb. 12 campus event. Instead, they were reportedly met with administrative censorship of their pro-Second Amendment flags.

The troubling incident has raised questions from UCLA law professor Eugene Volokh and was first reported by TownHall.com:

Part of the students’ booth display included a pro-Second Amendment flag that said “Don’t Tread On Me” and “2nd Amendment Since 1789.” But because two silhouettes of rifles appeared on the flag, administrators approached the students during the recruitment fair and demanded it be taken down.

The college has reportedly not responded to requests to clarify the issue.

Yesterday, FIRE sent a letter to the college’s leadership seeking answers and calling on the college to affirm that students’ First Amendment rights will not be abridged.

As FIRE’s letter explains, the policy cited by administrators to justify the flag’s removal does not apply to the displays of images depicting firearms:

The policy provides, in pertinent part, and with emphasis added:

“Firearms, knives, explosives or other dangerous objects, including, but not limited to any facsimile of a firearm, knife, or explosive, are prohibited on District property. . . .”

On its face, the policy’s broadest reach is limited to “dangerous objects.” For a “facsimile” of a dangerous object to fall within the scope of the policy, that facsimile would have to amount to a “dangerous object.” It is difficult to conceive of any image that could reasonably be described as dangerous, nor is there any reasonable argument that a depiction of a gun is itself dangerous.

Regulations like AP 3530 are intended to limit the use of imitations of weapons to frighten or threaten others rather than as a wholesale ban on their depiction.

FIRE further reminds the college that expression does not lose its protection under the First Amendment simply on the basis that some viewers find it offensive or even violent:

The First Amendment protects displays of flags and banners, including those whose display offends others, whether that offense arises from the content of the flag or the manner of its exhibition. For example, nearly a century ago, the Supreme Court of the United States struck down as an “unwarranted limitation on the right of free speech” a California statute barring display of any “red flag” or “banner” as a “symbol or emblem of opposition to organized government.” Stromberg v. California, 283 U.S. 359, 361–64 (1931). More recently, the Court held that burning the American flag was expressive conduct protected by the First Amendment, even if the provocative display offends others. Texas v. Johnson, 491 U.S. 397, 403–410 (1989).

Political discourse has long been steeped in themes of violence. Perhaps most famously, Thomas Jefferson—a principal author of what ultimately became the First Amendment—predicted that revolution and violence would be necessary to preserve liberty, writing: “The tree of liberty must be refreshed from time to time with the blood of patriots and tyrants. It is [its] natural manure.”8 Our Constitution likewise grants considerable deference to language that invokes themes of violence in a political context. See Watts v. United States, 394 U.S. 705, 708 (1969) (“The language of the political arena . . . is often vituperative, abusive, and inexact.”). Courts approach “with extreme care” claims that “highly charged political rhetoric” is unprotected by the First Amendment. NAACP v. Claiborne Hardware Co., 458 U.S. 886, 926–27 (1982).

Students’ First Amendment rights at public institutions like Orange Coast College are clear. If, as alleged, administrators wrongly cited a policy meant to regulate the possession of weapons to censor students’ depiction of them, then the college has violated the First Amendment. The college must ensure that similar incidents do not occur again and reaffirm to members of Young Americans for Freedom that their rights will be respected on campus.

[Update (February 25, 2019): FIRE is pleased to report that the institution has taken corrective action. Shortly after our post went up, Orange Coast College responded to our letter, letting us know that the administrator in question had already taken responsibility for the error and apologized to the student group. On top of that, the college has ensured that the students had an opportunity to fly the banner again, will be training staff on First Amendment issues, and is taking a look at the language of that policy. We appreciate the thorough response and the college’s quick demonstration of respect for students’ First Amendment rights.]