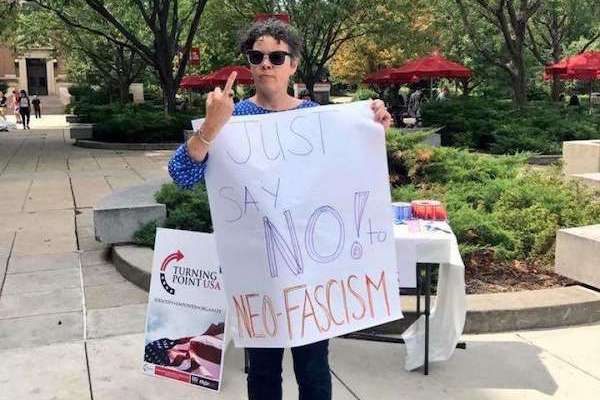 On Aug. 25, 2017 at the University of Nebraska – Lincoln, graduate student and adjunct lecturer Courtney Lawton attended a small protest on the quad of her campus, adjacent to where a student group was recruiting new members. The group, Turning Point USA, publishes the controversial Professor Watchlist, which has been criticized for targeting college professors who espouse liberal viewpoints. After learning that the organization was recruiting members, Lawton and others hastily arranged a counter-protest, where she displayed a sign that read, “Just say No! to Neo-Fascism,” called the conservative student behind the recruitment table — who had her camera rolling — a “neo-fascist,” and flipped her off.

Within days of the incident, TPUSA posted a video of Lawton’s remarks online and, after public outrage mounted, her teaching assignments were cancelled. Weeks later, after three Nebraska state senators wrote an open letter to UNL questioning the university’s ability to “conduct an honest investigation when a conservative student” is targeted by what they describe as “discriminatory actions,” Lawton’s teaching contract was allowed to expire. The university’s senior leaders pledged to government officials that she would never again teach at the university.

FIRE wrote a letter to UNL in December 2017, urging the university to reinstate Lawton because “courts have repeatedly held that the nonrenewal of an untenured faculty member’s contract on the basis of constitutionally protected expression constitutes impermissible retaliation.” UNL refused.

Now, Lawton is suing UNL for violating her rights to due process and free speech guaranteed under the Constitution.

According to the lawsuit, which was filed last week in the U.S. District Court for the District of Nebraska, UNL officials offered conflicting explanations for their decision to remove Lawton from the classroom, and ultimately her job.

UNL officials initially explained to Lawton privately that she was reassigned to non-teaching duties for safety reasons. As Lawton told the Lincoln Journal Star:

Executive Vice Chancellor Donde Plowman told me I was being removed from the classroom due to a security threat to me and to my students after Turning Point USA publicized the protest and released a troll storm upon the university.

Yet public anger at protected speech — however offensive others on or off campus may find it — is not a defensible basis to take action against the speaker. Instead, condemnation or counterspeech are the appropriate responses to speech others find offensive, not censorship. If outrage at speech is a reason to take action against the speaker, then a good deal of speech is a viral clip away from justifying censorship — as provocative or offensive speech will almost always find an audience angered by it.

Shortly after the Lawton incident, a Nebraska state senator complained in an op-ed that the demonstration against the TPUSA recruitment table was “premeditated,” that the student had been “verbally assaulted,” and urged the university “to terminate the employment” of the demonstrators “immediately.”

That same day, UNL released a statement explaining that Lawton was relieved from her teaching assignments because of her expression:

Our expectations for civility were not met by the lecturer in her behavior toward a student, and not representative of a university where the robust free exchange of ideas takes place 24 hours a day, seven days a week.

Ultimately, UNL officials, including President Hank Bounds and Chancellor Ronnie Green, bowed to political pressure. Speaking to the media, Bounds called Lawton’s gesture “unprofessional” and said her behavior was “not in keeping with [UNL] standards of conduct,” and Green said in an op-ed, “We communicated today to the grad student that she will not teach at our university going forward because of this inappropriate behavior.”

Lawton is suing UNL for violating her rights to due process and free speech guaranteed under the Constitution.

The political firestorm was unrelenting and ultimately successful. Yet Lawton’s expression, even if abrasive, was fully protected by the First Amendment. Although a university has greater ability to regulate faculty members’ in-class treatment of students, that does not give it license to require civility, at the expense of core First Amendment rights, between every member of the community at all times. Faculty members’ First Amendment rights do not turn off whether students — or any other member of the community — find their exercise offensive. As FIRE wrote at the time:

Legislators should certainly be concerned about ensuring that the campus community is a place where students are free from discriminatory harassment, regardless of their viewpoints. But legislators should also consider that students, including graduate students, enjoy full First Amendment protections at public universities. Lawton’s speech, including displaying her middle finger and using an allegedly derogatory term, is expressive conduct protected by the First Amendment. While the TPUSA students certainly had the right to recruit at UNL . . . counter-protesters also enjoy First Amendment protections while protesting in the open, outdoor areas of a public institution.

Yet public anger at protected speech — however offensive others on or off campus may find it — is not a defensible basis to take action against the speaker.

Given the gravity of wrongdoing on the part of UNL officials, the American Association of University Professors launched its own investigation into the matter and arrived at the “inescapable” conclusion that “political pressure played a significant role” in Lawton’s dismissal. In June 2018, the AAUP voted to censure UNL for violating Lawton’s academic freedom and for denying her the due process typically afforded to employees.

Since terminating Lawton’s employment, UNL has taken the praiseworthy step of adopting a new Commitment to Free Expression and appears on track to favorably resolve the AAUP’s censure. But it should take steps not only to mitigate the broader chilling effect, but to also restore the damage done to Lawton’s First Amendment rights.

Now in litigation, a favorable outcome for Lawton could have a lasting impact on the expressive rights of countless UNL students and faculty for years to come. Accordingly, FIRE will be watching this case closely.