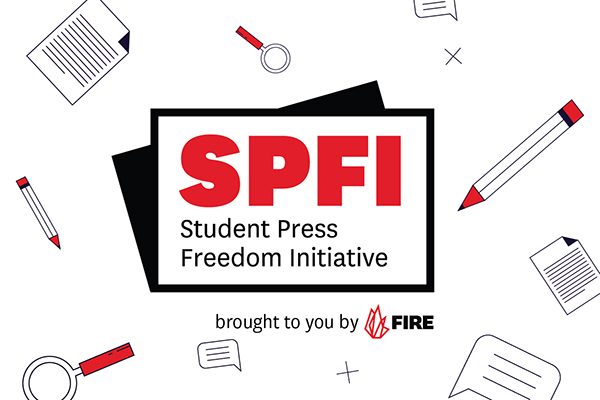 This week, in recognition of Student Press Freedom Day on Thursday, Feb. 24, FIRE will be celebrating all things student journalism. To kick us off, we sat down with ten FIRE staffers who were student journalists when they were in college to find out more about their experiences.  Today’s post includes excerpts from the last five of those interviews. Be sure to check out yesterday’s post to read responses from the first five!

Responses were edited for clarity and length.

Anelise is a program officer for FIRE’s Policy Reform department. While she was an undergraduate student at California Polytechnic State University, Anelise was a co-founder/editor/writer for Aletheia, a student-led Christian magazine.

Q: What brought you to student journalism?

A: We did a Christian journal of academic thought and it was a cross between a magazine and an academic journal. I had worked with a nonprofit organization called the Veritas Forum and their idea is to open up dialogue about life’s toughest questions and they usually bring in different speakers with different backgrounds who specialize in different academic fields at the top of their game. The Veritas Forum usually has a network of Christians who can offer a Christian background. Then they invite someone who’s of equal stature in their academic field to just have a conversation about different academic topics and how their worldview plays a part. So coming from that organization, they gave us the idea for the Christian academic journal and connected us with a network of student journals that approached those similar topics from a Christian perspective in writing. And so that’s how I got started with that one.

Q: How did your experience with your journal bring you to your current job at FIRE?

A: I think that it gave me an appreciation for free speech and brought over, into more of a writing format, the idea of civil discourse, and always the idea of being able to converse with other people that we don’t agree with. I think that that has really carried on from our journal, to where I work now — just that value of people coming together and understanding, or at least trying to understand, the perspective of another person. Even if your mind isn’t changed, there’s an ability to refine your own thoughts.

Sabrina is a program analyst for FIRE’s Individual Rights Defense Program. While she was an undergraduate student at the University of Florida, Sabrina was a staff writer and copy editor for the Independent Florida Alligator and a Florida Supreme Court Reporter for Fresh Take Florida, a news source that is part of WUFT News at the University of Florida. Sabrina’s passion for journalism began in high school, when she was editor-in-chief of her school newspaper.

Q: What was your experience like with censorship as a student journalist?

A: In high school, I went to a magnet school, and we were looking into how black male students were accepted or weren’t accepted. The administrators were not happy that we were even covering this and that they could possibly look bad. So they tried to make me stop writing the piece, and my adviser went to the principal and said “We’re not doing this to make you look bad. We are just writing a story and learning more about the practices of the school and you have to let Sabrina do it.” So it did end up getting published, but they tried to shut it down.

Q: How did your experience as a student journalist bring you to your current job at FIRE?

A: I had no knowledge or interest in journalism, generally, or the First Amendment before I fell into my student journalism role, and it made me have a really deep respect for journalists and a really deep appreciation of the First Amendment and how that protects our rights. Although in high schools, students don’t have as strong First Amendment rights, working for my high school paper made me realize the rights that we do have really help people and should be cherished. So I kept with journalism and then I took a media law class in college, and I completely fell in love. When I graduated and saw FIRE was hiring, it was really perfect, especially in my current role in IRDP, because I actually am helping people and defending people’s First Amendment rights even though I’m not an attorney yet.

Q: What was your experience with censorship as a student journalist and how did that experience change between the different roles that you had at the paper?

A: I don’t think I really appreciated, until I got into leadership positions, how delicate some of the topics that we covered were. A major conversation for us was pretty consistently “access” — making sure that we had access to administrators, access to players on sports teams, coaches, leadership. So it was always in the back of our minds when we were writing and covering news or sports — concern over having access. We were also aware that when we were covering the student government, the student government controlled our budget and actually, when I was editor-in-chief, we had a big blowup with the student government about the fact that they cut the media board’s budget and wanted us to start going online and move away from print publishing. I would say that that’s probably how I started thinking about press censorship and how there’s an inherent conflict when you have a newspaper that’s trying to cover a student government that determines that newspaper’s budget.

Q: Did your paper ever clash with the university administration?

A: Yeah, we definitely did. I think any good reporter, any good newspaper should eventually. A situation that always springs to mind when I think about stories that have an impact and clashes that we had with the administration was when I was managing editor, becoming editor-in-chief, a bunch of student protestors had a massive sit-in in the president’s office, protesting Georgetown’s history with slavery. There was a big reckoning that was happening on campus with the whole history of how the Jesuits in 1838 sold 272 slaves to save the university from crippling debts, and Georgetown was built by slaves. So there was a lot of student uproar and discourse about how Georgetown could reckon with that legacy. We had news writers who just did an absolutely spectacular job of being there 24/7. For administrators, from an optics perspective, that’s not the best. But eventually they came to a decision to rename a couple of buildings on campus and introduce a referendum for student fees related to the sale of slaves, so I think it was a really good example of how news reporting and student journalists can be there on the ground and can get the kind of access on a college campus that professional reporters might not get. The ability to be there 24/7 and just sit with them and rotate out every 12 hours or something — it was really valuable.

Aaron is the assistant to the executive director at FIRE.  While he was an undergraduate at Kent State University, Aaron wrote for the student newspaper, The Kent Stater, and hosted a talk radio show for two years.

Q: Do you think being a radio host empowered you to engage constructively in conversation?

A: I think that’s definitely the case. I’m thinking back to some of the early journalism courses I took that would do their best to replicate a newsroom setting, in which topics or stories would be discussed in real time and people would come from all kinds of different backgrounds and perspectives. We didn’t have a student newspaper when I was in high school, so this was all a totally new experience to me. I grew up in a conservative Christian background too, so most topics were pretty ideologically homogeneous. So, in that sense, to be exposed to so many different people and so many different perspectives, it was almost overwhelming at first because it was like I’d never been around so many people and so many different perspectives. You had no choice but to immediately learn how to navigate and work within that world.

Q: How does your experience as a student journalist inform how you do your job at FIRE?

A: We see student journalism cases come in frequently. It’s kind of crazy to see that at so many journalism schools across the country and across the political spectrum, students are still running into this issue of trying to report on things or publish things that higher ups in the administration have a problem with. So we help these kids write about what they want every day. Again, having not experienced personally too much — or really any — campus censorship, I think I might have come in without fully understanding the extent of the problem. But the longer I’ve been at FIRE, the more I see that this is not a problem that is going away probably any time soon.

Talia is FIRE’s copy editor. While she was an undergraduate at Dickinson College, Talia was a photo editor and staff writer for the student-run newspaper, The Dickinsonian.

Q: How does your student journalism experience inform your role as copy editor?

A: I’m very open to a variety of different perspectives and I truly believe in the value of free speech. So I think it enables me to be open-minded when I’m reading articles and when I’m looking to make edits. I’m trying to see things from the perspective of the person who’s writing the article. And obviously a lot of people at FIRE have a similar perspective on this, but I also don’t think that we’re a monolith in terms of what we think and what people write. So I think it informs my copy editing by making me more willing to see what someone else was trying to achieve with their writing and then trying to make edits that are in line with that purpose and that goal rather than trying to impose my own vision or style on how I think something should be done.

Q: Do you have any advice for student journalists?

A: My advice would be to be confident in your own voice and try not to self-censor. College is a very limited place in some ways, in that it’s not the world and there are other environments outside of it. I think many university environments don’t really reflect the world outside of them or the diversity of perspectives that actually exists. So if you think something that is unorthodox in that small circle, don’t be scared out of saying it because you probably are speaking for more people than you know.

Interested in learning more about your rights as a student journalist? FIRE’s got what you need. Our newly-launched Student Press Freedom Initiative has a 24/7 legal hotline, an online media law guide (Can I Publish This?), virtual trainings, in-person workshops, and even legal advocacy for student journalists under threat.

You can also join FIRE’s Student Network, and tick the “student journalism” box at the end of the form.