Purdue University has been making good on its promises to promote free speech on campus. In May of last year, it became the first public institution to formally commit to upholding free expression by adopting the FIRE-endorsed Chicago Statement, and it eliminated all of its speech-restrictive policies to become one of FIRE’s distinguished “green light” schools. Many universities might have declared a job well done and moved on.

Steven Schultz, Purdue’s chief legal counsel, said those sweeping changes instead marked the beginning of a larger, ongoing conversation about the role of free speech at the public university, which serves nearly 40,000 students. More specifically, the developments prompted Schultz, along with small groups of interested faculty and students, to begin discussing how Purdue could create a culture where free expression is truly understood and appreciated in light of these new commitments.

“A consensus started to emerge about the need for a training session and the value it would have,” Schultz said.

And they reached a decision: Free speech would play a starring role in student life from the moment a freshman stepped on campus.

At the direction of university President and former Governor of Indiana Mitch Daniels, Schultz’ office began working with Purdue’s Director of Orientation Programs, Kasi Jones, and a newly formed task force within the University Senate’s Equity and Diversity Committee to create a first-of-its-kind free speech orientation presentation for incoming students. The session debuted to great reviews this fall during the first night of Boiler Gold Rush, the university’s weeklong orientation program. (Watch the session in full below, or on Purdue’s YouTube page.)

“It was a resounding success,” Schultz said of the free speech training — a combination of skits inspired by real-life events at Purdue, a faculty panel discussion, and video clips. “It was pretty much rapt attention throughout. I think they got it.”

What those students got were two overarching messages, said psychologist Heather Servaty-Seib, a professor and associate department head in the department of Educational Studies who chaired the taskforce that helped develop the training modules: a primer on the First Amendment and tools to help students navigate their own relationships with freedom of expression at Purdue.

A handful of other schools have chosen to promote free speech with incoming students this fall: The University of Chicago sent students a widely discussed letter praising diversity of opinion and committing to “[f]ostering the free exchange of ideas,” and Columbia President Lee Bollinger highlighted the benefits of free speech in his remarks to incoming students. But Purdue’s more expansive, formalized approach—incorporating a special training as part of its widely-attended orientation program—is a novel one.

“We wanted to equip the students with tools that we haven’t seen them come in with in recent years,” Schultz said. “For example, it doesn’t appear that there’s always a firm understanding of what the First Amendment requires. But then also equip them to be able to respond with their own voice and use counter speech. Help them understand that it’s OK to be offended and that there’s a number of ways that they can respond as a member of the community.” While the presentation is voluntary, Schultz said, the vast majority of incoming students attended.

“Overall I think it went over really well,” said Jakelyn Spencer, a junior who acted in the mini-skits. “I think a lot of the new students had no idea that these types of things went on on our campus. It was funny to hear them laughing at certain things that were being said. Backstage the rest of us were laughing because they had no idea that these things were real. I think they learned fast that some of the things addressed do happen on campus, and that was pretty neat.” 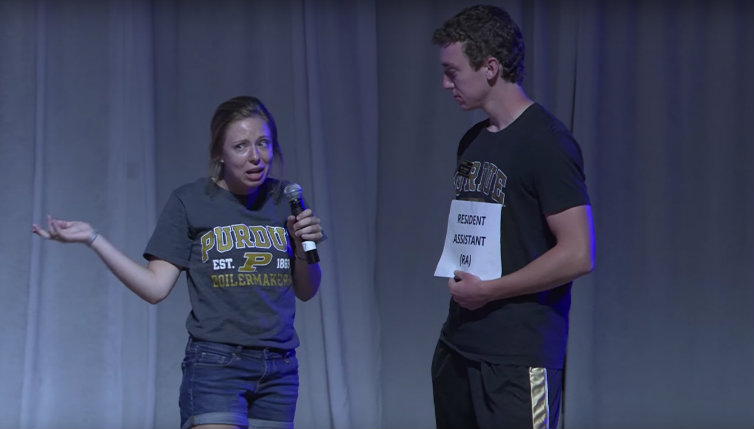 A student tries to convince a resident assistant to remove offensive dorm decorations in a skit for the Boiler Gold Rush orientation session on freedom of speech.

Mitchell Busse, a freshman who attended the presentation, said the information has already proved useful. He recently encountered a large, post-election protest on campus — something he said was surprising for him personally.

“Where I come from, this medium-sized town in Indiana, I had never seen anything like that,” said Busse. “That was completely eye-opening to me as to what can actually come about from students being allowed to be out there and voice their opinions.”

And the training session held his attention. “I was just really appreciative of how [it] spelled out for us what we were and were not allowed to do in different scenarios,” Busse said.

“They were very eloquent about the notion that it’s OK for universities to aspire to civility and mutual respect and those kinds of values, but never to the point of censorship,” Schultz said. “So we tried to make that point: that we really strive as part of our Purdue values system, as part of our community values, to promote civility and mutual respect and inclusion, but we also have to honor free speech.”

And that unique approach may soon inform similar attempts at other universities. Purdue’s Director of Student Success Programs Dan Carpenter told FIRE that Purdue recently submitted a proposal to Student Affairs Administrators in Higher Education (NASPA) to present the program’s methodology at NASPA’s 2017 conference and that Purdue was selected. Carpenter said Purdue will present model methodologies for how universities can navigate the tricky process of teaching students to honor all of those values.

Kip Williams, a psychological sciences professor and member of the faculty task force, said he’s seen what can happen when those principles compete rather than complement one another.

“My own feeling was that too often, our reaction to people or groups whose opinions or actions are different from ours is to ban them or censor them or punish them or somehow drown out the speech rather than engaging in verbal communication with each other.”

“Censoring things is one of the scariest things we can do,” Williams said. But he’s seen students unfamiliar with confronting opposing views, particularly those with “majority” viewpoints, suggest it.

He hopes this year’s training — the first of what’s expected to become a recurring annual program that may soon include faculty — will help. Williams added that Purdue’s relatively recent pro-speech stance under President Daniels has been a boon for academic freedom.

“When I first came to Purdue [in 2004], we were issued an email saying we shouldn’t say anything political,” Williams said. “We had students videotaping professors and sending them to Hannity and things like this, and there were calls to shut these faculty down.” He said the atmosphere now is different.

“I can’t speak for all faculty, but for me it’s liberating,” Williams said. 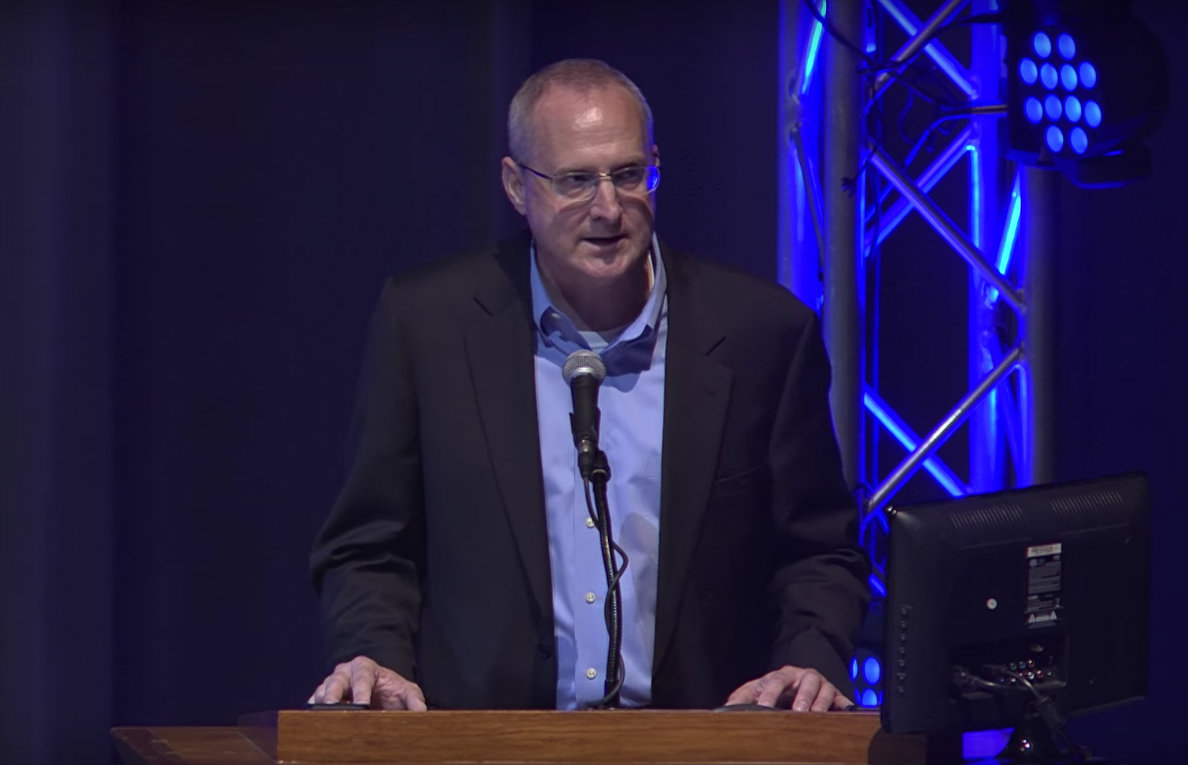 Heather Servaty-Seib said she wants students who attend the orientation program to feel liberated, too.

She said those skills vary widely, depending on the individual student’s history.

“Especially undergrads, they’re coming into college with very different experiences. As educators it’s our job to educate them and empower them around freedom of expression. If we don’t do that, then there are risks,” she said. “We need to tell them: ‘Even if your experience has been that your voice has been oppressed, that will not happen here. The right to the freedom of expression is everyone’s right.’”

And as an education studies professor, Servaty-Seib said she considers free expression to be one of the most powerful tools available to tackle today’s most divisive topics.

Purdue’s continuing conversation on freedom of speech, she said, could be the key to helping students talk openly and honestly about the most important issues of our time.

“The way in which you do that,” she said, “is to make sure that all voices are heard.”

This article was updated with additional information for clarity on December 8, 2016.

FIRE is here to help any institution or student group looking to improve the free speech climate on their campus. Check out our website to download FIRE’s Guide to Free Speech on Campus, contact our policy team for information on reforming restrictive speech codes at your school, ask campus administrators to adopt the Chicago Statement, and more. We’ve also got a range of student-specific resources over on our FIRE Student Network page.

Can’t find exactly what you’re looking for? Contact fire@thefire.org with an inquiry. We look forward to hearing from you.