Police at George Washington University are reportedly scrutinizing security camera footage to identify the culprits behind posters clearly satirizing a conservative student organization — the second time the university’s authorities have investigated the same poster in ten years. Yesterday, we wrote to the university calling on them to abandon the investigation.

Islamophobic fliers designed to look like they were posted by GW’s Young America’s Foundation were discovered on campus Friday, according to the student group.
The posters made it appear as if YAF was hosting an “Islamo-Fascism Awareness Week” with the heading “Hate Muslims? So do we!,” according to a post on the organization’s website.

In a statement, YAF said the group had no connection with the fliers, calling them “childish, revolting and distasteful,” and said they were posted to undermine the organization and its conservative message.

“Of course, these ridiculous posters that attempt to paint all conservatives with a broad brush of racist xenophobia have no connection to GW YAF, and are just the latest attempt by disgruntled leftists to slow the advancement of conservative ideas at GW,” the organization wrote in the statement.

YAF urged officials to discipline whoever was responsible for posting the fliers.

The university issued a formal statement announcing an investigation:

On Friday, Sept. 8, the George Washington University was notified of hateful fliers designed to look as if they were posted by an on-campus conservative student organization. The offensive fliers were immediately removed, and GW’s Police Department is investigating the matter[.]

The university does not tolerate actions that make any member of the GW community feel unsafe. We expect that all our students, no matter what opinions they hold, will conduct themselves in the spirit of mutual respect that has long been a hallmark of this university.

What merits the urgent removal and investigation into these flyers? This over-the-top satire: 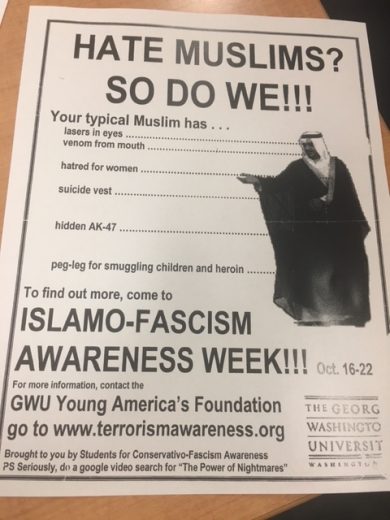 This isn’t the first time GWU has launched an investigation into these very posters. When this event was actually organized and these posters first utilized — and, to be clear, the event happened a decade ago and doesn’t appear to be planned again — many perceived the posters as “pretty clearly a satire, rather than an attempt to deceive.” Clearly, critics of “Islamo-fascism” do not typically believe that Muslims have lasers for eyes or peg-legs for smuggling children and heroin. And if someone views critics of “Islamo-fascism” as Islamophobic, what business does a university have telling them that they should have “respect” for those views, and involving police when they don’t?

The university’s response then was farcical. In 2007, the police launched an investigation which resulted in — after seven students published an open letter explaining the posters — the students’ “signed confessions” with the campus police. The university likewise sought to clamp down on YAF’s event, demanding that the group prohibit “hate speech” during its event and warning of unspecified “consequences” were someone to say something subjectively offensive. Signed confessions? Ad-hoc prohibitions on “hate speech”? When a university is embarrassed, it often means that any controversial speech, no matter its viewpoint, is at risk of censorship.

And it’s a lesson that the university appears not to have learned.

As we explain in our letter to the university’s authorities, the student organization may have a sympathetic argument that it’s not fair to criticize them for an event that their predecessors organized long ago, but deciding what criticisms are fair or unfair is not the province of university police officials:

It’s not clear what the precise message of the satirist is here. The student group pilloried by these posters may complain that the criticism from these posters is unfair. The event at issue was organized by predecessors who have long since graduated from the university, and occurred a decade ago. Yet it occurred, and students should be free to question the legacy of that message, and whether it persists today. They must also be free to assail organizations’ views as they perceive them; free speech means little if students cannot label and criticize views they perceive to be hateful.

More fundamentally, it is not the place of the police and university administrators to separate fair satire from unfair satire, nor to set upon a path of imposing discipline based on whether students or officials find the expressed idea, as they understand it, to be offensive. It is never proper for police officials to endeavor to uncover the identity of an anonymous satirist on the subjective belief that the satirist’s views are hateful or erroneous.

Investigations into clearly protected speech, even if they do not ultimately lead to formal charges or levied punishments, can have real chilling effects. Authorities at a university of any calibre — especially one which promises its students freedom of expression — have no business investigating clearly satirical works. Doing so twice is shameful.