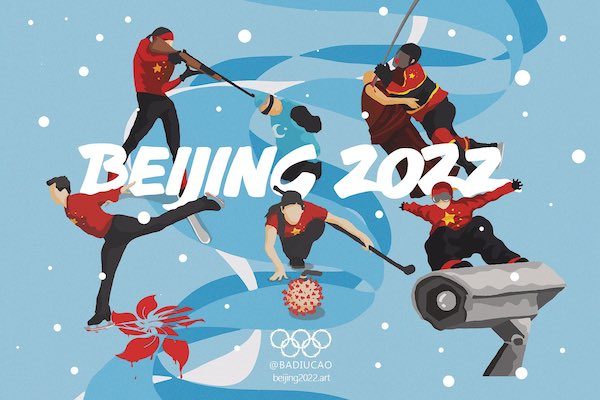 Within China, censorship has been the hallmark of the Beijing 2022 Olympics. This weekend, China’s repression of dissent was imitated here in the United States by George Washington University, when the university’s president vowed to identify and expose those who posted Olympics-themed art on campus criticizing China’s human rights record.

Today, we’re relieved that GW has announced there will be no investigation. But while the quick correction is welcome, there are some important lessons universities nationwide should learn from GW’s misstep.

Over the weekend, student groups began filing complaints with GW’s administration after discovering posters depicting artwork by Australia-based Chinese artist Badiucao on campus. An oft-censored critic of the Chinese government, Badiucao’s series satirized the Beijing Olympics and China’s human rights record. The subject of a recent CBS News special, the works depict “a provocative visual argument for why China is unfit to host the games. Here was a Chinese hockey player bloodying a Tibetan monk. A Chinese snowboarder atop a surveillance camera. A faceless Chinese biathlete poised to execute a member of the Uighur minority. A curler representing China’s delay in warning the world about COVID.”

GW’s Chinese Students and Scholars Association claimed the posters “insulted China” and are “not only trampling on the Olympic spirit,” but also constituted “a naked attack on the Chinese nation.” The association went on to call for a public apology, and for the people responsible for posting the images to be “punished severely.”

On Sunday, the GW Chinese Cultural Association (GWCCA) shared a letter demanding punishment for the posters — which they suggested were outside the “scope” of free speech — and suggesting that an investigation was already underway. The group wrote:

The university received complaints from the students and asked the George Washington Police Department (GWPD) to investigate the incident. One of the staff in charge of the Office for Diversity, Equity, and Community Engagement said she was “very sorry to learn that hurtful and offensive posters were taped on campus and recognized the negative impacts they had on the Chinese student community.” Moreover, the university’s new president had said that he was personally offended by them.

GWCCA decried the posters depicting violence against Uyghurs and Tibetans as “hav[ing] elements of bloodiness and gun violence, which are inappropriate from the perspectives of students who love peace and advocate ethnic unity.” Likewise, it argued the COVID-19 poster “may incite Asian Hate sentiment and pose a potential risk to the personal safety of all Chinese and Asian students at George Washington University, including verbal and physical violence.”

The group’s demands for an investigation temporarily appeared to have been granted. Badiucao shared on Twitter an email from GW president Mark S. Wrighton promising to uncover the individuals who posted the art:

Please know that I am personally offended by the posters. I treasure the opportunity to work with talented people from all over the world, including China. Your reaching out to me directly is much appreciated, and we are working to have all of these offensive posters removed as soon as possible.

I, too, am saddened by this terrible event and we will undertake an effort to determine who is responsible.

I demand him an explanation why exposing CCP’s abuse offends him. pic.twitter.com/Bm5k2nFAJ4

Today, after a warning from FIRE and extensive criticism on social media from students, alumni, Sens. Ted Cruz and Marco Rubio, and the general public, Wrighton has announced there will be no investigation. “Without more context on the origin or intent of the posters, I responded hastily” to student complaints, Wrighton wrote, calling his email a mistake along with the university’s removal of the posters. Wrighton added that he recognizes these posters are a “critique of China’s policies” and “political statements.”

He went on, “I want to be very clear: I support freedom of speech—even when it offends people—and creative art is a valued way to communicate on important societal issues.” Wrighton promised that GW will “not take any action against the students who displayed the posters.”

It should have been immediately obvious to GW’s administration why attempting to unmask and punish anonymous student critics of China is a terrible idea.

This is the correct outcome, and FIRE is pleased to see Wrighton reach it. However, it remains troubling that his first instinct was to censor the posters — which Wrighton admits have already been taken down by university staff — rather than abide by his university’s free speech commitments. Wrighton’s belated positive opinion of the posters’ content should not determine whether students can see it. After all, this is not the first time GW has announced an investigation into anonymously posted flyers.

Additionally, it should have been immediately obvious to GW’s administration why attempting to unmask and punish anonymous student critics of China is a terrible idea and, frankly, it’s troubling that they needed to be reminded of this fact. If the students who posted this artwork were from China or Hong Kong, they and their families could have been placed in real peril if their involvement were investigated — a fate that has awaited other international students who have been uncovered as critics of China at U.S. campuses. Universities nationwide should remember this point.

FIRE is pleased to see GW reach the right result. But next time, we hope GW reaches it immediately, rather than after widespread criticism. Had the public not been made aware of Wrighton’s response, it’s possible that students would have been punished simply for speaking their minds. That’s an outcome that should shame any American university worth attending.