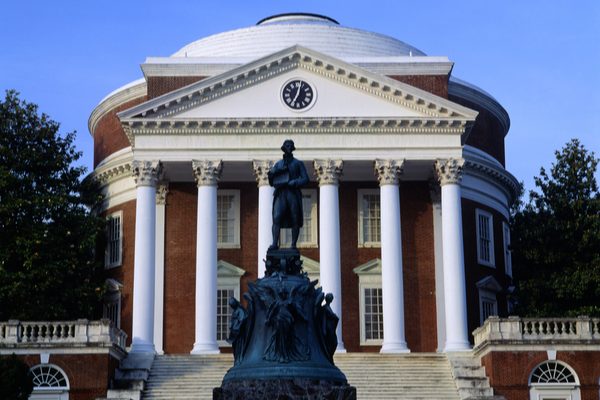 The University of Virginia’s historic Lawn is more than a typical college quad. The UNESCO World Heritage Site is also home to several dozen fourth-year students and faculty. Every year, over 200 third-year students at UVA apply for the coveted spots, and those selected can mark themselves as among the university’s most well-recognized student leaders. Living on the Lawn is an immense honor, and it comes with the explicit expectation that the resident will use their position to interact with the university community, be it in the form of showing their room off to prospective students, hosting trick-or-treaters every Halloween, or posting signs for their favorite causes and events on their door. This last tradition had gone relatively unobstructed, until fall 2020.

In September, several Lawn residents posted signs on their doors directly criticizing the university — almost all involving the phrase “F— UVA.” In the face of backlash, primarily from alumni, university administrators correctly maintained that such speech was constitutionally protected.

In March 2021, one resident went a step further, creating a sign that read “Burn it all down” and included the Kwame Ture quote, “In order for non-violence to work, your opponent must have a conscience.” University Housing and Residence Life administrators swiftly removed the sign and threatened possible expulsion from the Lawn for further infractions. A letter sent to the student stated that “the sign advocates physical violence, and could spur it,” and erroneously claimed that the removal of the sign was consistent with the First Amendment. This was coupled with a revision to previously unenforced decoration policies in UVA’s student-housing agreement, including new restrictions on future Lawn signage to two Housing and Residence Life-attached pinboards of unspecified size, which go into effect next academic year. Thus, the policy effectively bans the large, colorful signs that decorated Lawn room doors in recent memory.

When universities succumb to pressure — be it from students, alumni, or donors — and silence speech, they show themselves willing to place the absence of criticism over the presence of constitutional rights.

These policy changes troubled me, and considerably curtailed my excitement as a future Lawn resident. I became aware that my university would be closely monitoring the speech of myself and my classmates, and increasingly likely to construe criticism as a credible threat of violence. These policies are part of a troubling trend wherein universities implore students to become resilient thinkers, capable of handling uncomfortable ideas and responding to challenging arguments, while failing to model that kind of behavior themselves.

If universities wish to truly educate their students — and, as UVA’s recent Committee on Free Expression Inquiry claims, create “citizen leaders” — then not only must freedom of expression be stringently protected, but it also must be coupled with resilience in the face of uncomfortable or offensive speech. By framing a clearly symbolic quote as a direct incitement of violence, university administrators are just as guilty of using “concept creep” as college students who are lampooned for arguing that conservative speech on their campus is tantamount to a physical attack.

When universities rush to frame a provocative opinion as “threatening,” not only do they carelessly silence First Amendment rights, but they enable the future censorship of other ideas. If a disgruntled, hyperbolic quote incites violence, what about a student who puts up a poster supporting the Second Amendment? Or an animal-rights activist who argues that meat is murder? When universities succumb to pressure — be it from students, alumni, or donors — and silence speech, they show themselves willing to place the absence of criticism over the presence of constitutional rights.

I am unsettled by my university’s silencing of speech critical of it and even more concerned by its new policy, which limits speech of all kinds. When students make controversial statements, even if those statements seem unfair or unfounded, the response should never be to silence them. Not only is this ineffective — it does nothing to address the underlying issue that motivated the speech — but it is also directly counter to the mission of a university.

College students are more than capable of handling uncomfortable ideas and expressing provocative opinions. However, the callous censorship of uncomfortable speech directly implies that young adults’ ideas are infantile and unworthy of protection, and that they require paternal intervention from an administration to prevent exposure to difficult concepts. Such assumptions are not only false, but deeply destructive. If a university seeks to create thoughtful adults — adults who enter the workforce willing and able to interact with those who may have radically different beliefs than their own — they must resist the urge to censor.

As I get ready to move into a Lawn room of my own this fall, I sincerely hope that my university will reverse course. If not, they will likely continue to face student criticism — even if the criticism is limited to a few square feet.

Emma Camp is a rising senior at the University of Virginia and FIRE Summer Intern.