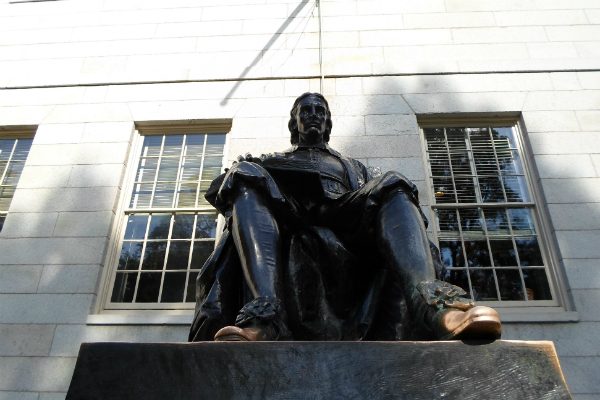 Last month, The Crimson reported that Harvard College was rolling out new regulations for events involving “controversial” speakers, including a requirement that a “neutral moderator” be present. We’ve now examined the policy, and while the “neutral moderator” requirement is less nefarious than it sounds at first, the policy has several issues, including ambiguous wording and a requirement to notify the school one month in advance of any event involving “high profile, controversial speakers, or VIP guests.”

The Crimson’s report, and its editorial board’s subsequent criticism of the policy, caught our attention — especially since Harvard earns FIRE’s worst, “red light” rating for its speech codes and has a remarkably poor history regarding the civil liberties of its students. However, the full policy was not available either through The Crimson or through Harvard’s own website, so we withheld judgment until we were able to examine a copy of the policy. FIRE was able to obtain and view a copy of the policy as distributed to students as part of the 2019-2020 edition of the Harvard College “Recognized Student Organization Resource & Policy Guide.”

The policy dictates that events featuring “high profile, controversial speakers, VIP guests” and events “where the principles of free speech have the potential to be compromised” must be registered at least one month in advance, and that a representative of the Dean of Students Office will determine whether the event requires a “Moderator.” Should the representative determine that a Moderator is necessary, students may either request and select a member of the faculty or administration to serve as a Moderator, or allow the DSO representative to moderate the event. However, the Moderator “[m]ust always represent an unbiased neutral party” (emphasis in original). The policy describes the Moderator’s role as follows:

The Moderator’s task shall be to preserve the University’s concern for the protection of free speech. In carrying out this role, the Moderator should be aware of the danger of curtailing free speech because of audience dissent.

It’s important to note that this “Moderator” does not fulfill what most people would consider to be the actual role of a moderator, which usually includes duties such as asking questions and follow-ups, introducing the topic of discussion, dealing with time constraints, and so on. Rather, the Moderator is described as essentially “balancing the rights of the speaker with the rights of those who disagree.” That is, the Moderator’s role is to prevent a heckler’s veto with a “two-strike” ejection policy for disruptive audience members. In fact, the policy does a good job in articulating that a Moderator may only cancel an event due to a “clear threat of physical violence or to University property.” When an event must be adjourned for fear of violence, under the policy, the Moderator should “[make efforts to] promptly reconvene it, if possible, in a setting where free speech can be protected.” While the Crimson Editorial Board rightly notes “an individual Moderator does not have the ability to control an agitated crowd, especially the sort of the crowds the College is likely most worried about,” the policy at least puts the onus of making such decisions on a person with some training, rather than leaving no one at all standing by to protect free expression.

Going by the text of the policy alone, the (poorly named) Moderator role appears to be a reasonable effort at protecting the free speech rights of both speaker and audience by prohibiting the heckler’s veto while allowing space for brief heckling that is itself protected speech. We are pleased to see Harvard taking a positive step towards protecting free speech. Unfortunately, however, this policy is marred by other problems.

Whether a Moderator is required hinges on a determination that the speaker involved is high profile, controversial, or VIP. Precise standards for any of these categories are not laid out in the policy. Who is and is not controversial is largely subjective, and where ambiguity and subjectivity exist in policy, bias and disparate enforcement often creep in.

The Crimson Editorial board did not miss this problem either, calling the policy “troublingly vague” and pointing out how this could be a serious problem in practice:

Similarly vague is the policy’s requirement that a Moderator be an “unbiased neutral party.” What Harvard means by “unbiased” and “neutral” is unclear, and students are left only to guess who might be acceptable to the administration and who might be rejected. Without any specific criteria, it is impossible to know the answer.

The requirement that any event implicated by the policy has to be registered one month beforehand is also a problem. This is certainly not the first time FIRE has seen “waiting periods” for event registrations and the like. Waiting periods are common enough that two years ago, my colleague Samantha Harris wrote about why people should care about waiting periods for campus protests. An inflexible month-long waiting period for speaking events is a problem for much the same reason: It strongly limits the ability of students to respond to breaking news and rapidly-unfolding events. In the age of Twitter and the 24-hour news cycle, events evolve and change rapidly. Requiring students to obtain approval a month in advance will ensure that some events deal only with yesterday’s news.

As alluded to above, Harvard also produces an inequitable situation by subjecting those who wish to invite speakers likely to be deemed controversial to more onerous requirements than those whose interests lie in issues that are less fraught. Obviously, this burden would fall particularly hard on students with an interest in politics. That’s not just because, as the Crimson points out, speakers perceived as conservative are more likely to be deemed controversial. Regardless of party, it is extremely difficult to book just about any politician 30 days in advance during campaign season.

To the extent that waiting periods for speakers are caused by logistical hurdles (e.g. the time it takes to reserve a space, engage security, and rent equipment), they may be reasonable. But it is not reasonable for the deciding factor between a waiting period of one month and zero days to be only an administrator’s subjective determination that an event is “controversial.” While some sort of waiting period might make sense for scheduling the Moderators supplied by the Dean of Students Office, it is unclear why students who are supplying their own Moderator would be subject to any waiting period, let alone one as long as a month.

Despite its flaws, the policy has been distributed to leaders of student organizations at Harvard College, and appears to be finalized and in effect for the 2019-2020 school year. While we are pleased that the role of the Moderator does not itself intrude on the content of the event, several ambiguities in the policy’s language and its unnecessary waiting period keep us from being able to wholeheartedly praise it. We hope that Harvard is open to improving what is obviously a well-intentioned policy to protect free speech, and of course FIRE’s Policy Reform team would be more than happy to help.

A transcription of Harvard’s new policy can be found below.

[EDITOR’S NOTE: The policy written below was accurately transcribed from a photograph of the original. The typos and grammatical errors are present in the original document.]

The Principles of free speech and the free interchange of ideas are fundamental to the Harvard community. You should align your student organization’s programming with the value of free speech particularly if you are hosting an event where these principles have the potential to be compromised.

All events with High Profile, Controversial speakers, or VIP guests are to be approved by the Dean of Students Office and should be registered at least 1 month in advance. Please contact JonRobert Bagley, jonrobert_bagley@harvard.edu, if you should have any questions or need help determining if your guest fits into the above criteria.

When inviting high profile, controversial speakers, VIP guests or are hosting an event where the principles of free speech have the potential to be compromised, Student Organizations are required to register the event through TheHub at least 1 month in advance.

Once registered the DSO will be in contact to discuss the specific parameters of the event.

Determination of Need: The DSO representative (DSOR) may determine that the protection of free speech at an open meeting requires a Moderator or a student group may request it. In most cases the DSOR will moderate a student organizations [sic] event. However, student organizations have the ability to request/select any member of the Faculty or Administration.

Selection of Moderator: When selecting/requesting a new Moderator the student organization will notify the DSOR no later than 1 week prior to event.

The Moderator’s task shall be to preserve the University’s concern for the protection of free speech. In carrying out this role, the Moderator should be aware of the danger of curtailing free speech because of audience dissent.

The Moderator should make clear at the meeting that his/her role reflects no position for or against the views of the speaker or the sponsoring organization. At the event, Attendees will be informed that the protection of free speech (the Curtailment of free speech undercuts the intellectual freedom that defines our purpose and deprives some individuals of the right to express unpopular views and others of the right to listen to unpopular views) and balancing the rights of the speaker with the rights of those who disagree will be made by the Moderator. During the event it is the Moderator’s responsibility to protect free speech from distributors. During student organization events Moderators will employ a two-strike policy:

By issuing a warning, the disrupters are told that their actions are unacceptable and must stop. Members of the audience will learn where they stand; they will know where the line is. If people cross that declared line again, they cannot claim not to have realized they were disruptive. A warning is not needed in cases of physical violence. Individuals who commit such acts will be ejected from the event immediately.

In rare cases a Moderator can decide to cancel an event because of a clear threat of physical violence or to University property.

When there is not incitement of violence or University property is not threatened, the Moderator should ordinarily not cancel an event. If a Moderator must adjourn an event, efforts should be made promptly to reconvene it, if possible, in a setting where free speech can be protected. (It is understood that that the police always have emergency powers, and that nothing in these Guidelines questions the University’s legal responsibility for safety on campus. If it becomes necessary to use such residual powers, a University official should normally attempt first to consult with the Moderator.