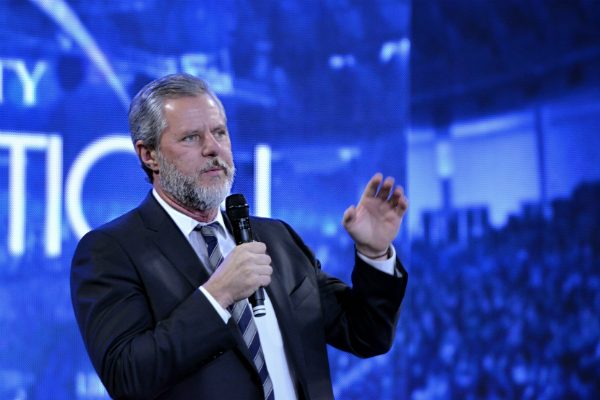 Falwell Jr.’s op-ed started off by praising President Donald Trump’s March 2 announcement at the Conservative Political Action Conference that he planned to issue an executive order requiring that colleges receiving federal research funding protect free speech on their campuses. Falwell Jr. then went on to make some curious claims about Liberty University and its purported respect for freedom of expression. Among other comments, Falwell Jr. stated:

Falwell Jr. is right to decry the censorship that occurs at many universities; indeed, FIRE has spent almost 20 years fighting campus censorship across the country and the political spectrum. But Falwell Jr. is quite wrong to suggest that such censorship does not occur at his university.

As FIRE has explained many times before, Liberty is a private university not bound by the First Amendment. Liberty is not currently listed in FIRE’s Spotlight database; it is what FIRE would call a “warning school,” based on our reviews of Liberty’s previously available policies. (Liberty’s current policies are not available to the general public, which alone is sufficient for an institution to receive FIRE’s worst, “red light” rating.) Warning schools are aptly named — students should know in advance when a private college explicitly places other values above the right to free speech.

In 2016, however, Falwell Jr. claimed, in reference to anti-Trump students on campus, “It is a testament to the fact that Liberty University promotes the free expression of ideas unlike many major universities where political correctness prevents conservative students from speaking out.”

Falwell Jr. has now claimed multiple times that, contrary to the university’s policies and behavior, Liberty respects student free expression. While Liberty can set its own policies moderating student speech, its president should not mislead prospective and current students by making public statements that will give them the wrong impression about the university.

That’s why FIRE wrote to Liberty’s leadership in August 2018 in response to reports that the university had engaged in years of censorship of student newspaper the Liberty Champion, despite Falwell Jr.’s promise that “Liberty University promotes the free expression of ideas.”

Starting back in October 2016, Falwell Jr. reportedly began reviewing Champion articles that mentioned Trump and warned the paper not to run sports editor Joel Schmieg’s column criticizing comments Trump made about “grab[bing] [women] by the pussy” during a leaked recording from a 2005 filming of “Access Hollywood.”

In 2018, Champion journalists alleged more stories were cut or censored, including a skeptical interview with the director and producer of the film “Commander,” which “tell[s] the story of Mark Taylor, who spoke of his vision that Donald Trump would become president”; a discussion of the university’s treatment of unmarried pregnant students living on campus; and coverage of “Red Letter” leader Shane Claiborne, who planned to pray on Liberty’s campus and hold a “Revival” in Lynchburg, Virginia and was threatened with fines and jail time by campus police.

Your job is to keep the LU reputation and the image as it is. … Don’t destroy the image of LU. Pretty simple. OK? Well you might say, “Well, that’s not my job, my job is to do journalism. My job is to be First Amendment. My job is to go out and dig and investigate, and I should do anything I want to do because I’m a journalist.” So let’s get that notion out of your head. OK?

FIRE’s letter called on Liberty to live up to Falwell Jr.’s promises of free expression and end its campaign of censorship against student journalists. Unfortunately, the university failed to respond to FIRE’s concerns and made no apparent effort to square Falwell Jr.’s public statements with the university’s policies or to relinquish censorship power over the Liberty Champion, earning Liberty a spot on FIRE’s 2019 list of the 10 worst colleges for free speech.

Falwell Jr.’s recent op-ed praising his university’s efforts to “actively encourage open political discourse” conveniently overlooks how Liberty has actively harmed open discourse on its campus through its years-long censorship of its student press. Instead, Falwell Jr. focuses on his administration’s decision to host “high-profile speakers with different points of view.”

While Liberty’s endeavor to introduce students to a broad range of speakers is admirable, a university does not become a welcoming place for “[f]ree speech and intellectual diversity” simply by administrators’ invitations to a bipartisan array of speakers. Freedom of expression on campus exists when students, not just handpicked speakers, are allowed to express their opinions — regardless of how unpopular it may be with their peers or their university’s president. Freedom of expression is meaningless if only understood as the freedom to listen but not to speak.

FIRE would be pleased to work with Liberty to reform its policies and procedures to ensure that students can actually enjoy the free and open environment that the university’s president advertises to them. Until then, Liberty remains on FIRE’s 2019 “10 worst” list and Falwell Jr.’s promises remain empty.