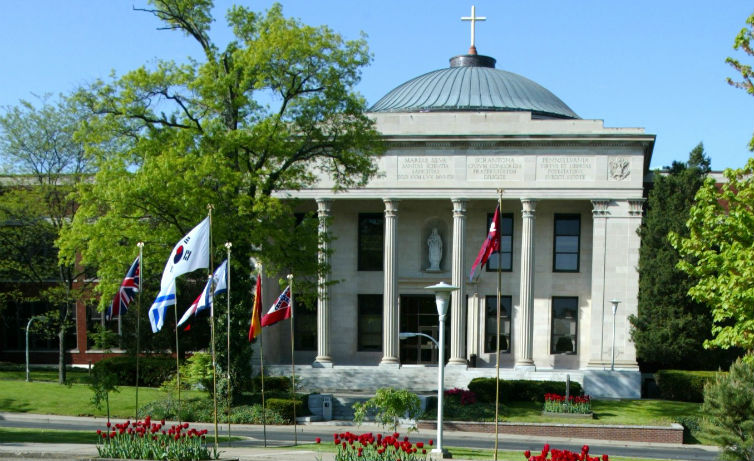 Officials at Marywood University in Pennsylvania removed student protesters’ display of an American flag with slogans written on it last Tuesday night after the protest caused offense on campus.

The controversy emerged after students held an event in support of Ferguson, Missouri, protesters in the school’s campus rotunda. The protest featured a flag that had been hung upside down and covered in messages such as “No justice on stolen land” and “#BlackLivesMatter.” University administrators took down the flag after receiving complaints from students and school officials.

Although Marywood is a private, Catholic university, it promises students expressive rights. For example, Marywood’s Joint Statement of Rights and Freedoms acknowledges:

Academic institutions exist for the transmission of knowledge, the pursuit of truth, the development of students, and the general well-being of society.  Free inquiry and free expression are indispensable to the attainment of these goals.

Unfortunately, in a statement issued after the removal of the student protesters’ flag, Marywood President Sister Anne Munley paid mere lip service to expressive rights while excusing its decision to censor the protest:

As stated yesterday, Marywood University understands our students’ first amendment rights to freedom of speech, peaceable assembly, and freedom of the press, but we abhor the desecration of the United States flag. Such an action is inconsistent with the mission of Marywood and our core values.

Private universities that promise their students free speech must honor that commitment. Munley’s statement is troubling because she failed to recognize that in society at large, defacing the flag is widely known to be protected expressive conduct. The Supreme Court famously upheld this treatment of the American flag as protected speech in Texas v. Johnson, 491 U.S. 397 (1989). The fact that members of the Marywood community were offended by the demonstrators’ treatment of the flag should not make it any less protected, if free expression is to mean anything at Marywood.

Last Thursday, FIRE’s Will Creeley spoke to WILK-FM’s Steve Corbett about the controversy. Will argued that Marywood University must live up to its promises to protect students’ speech, regardless of the offense it may cause. As Will pointed out, Marywood University has taken on the responsibility to stand by students’ expressive rights. In the case of the protestors’ controversial flag display, it failed to do so.