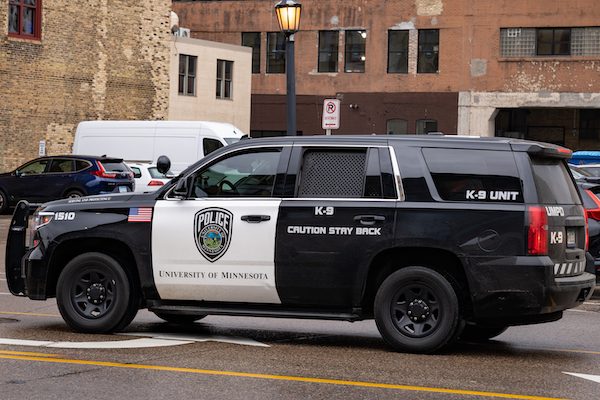 Just days after the Minnesota Student Association demanded the resignation of University of Minnesota Police Chief Matthew Clark, saying he has “failed to increase campus wellness and safety for students of color,” two police unions — including the union representing the university force — have called for university and criminal investigations into a prominent student association leader. In a press release, the unions offer a video clip in which she appeared to encourage others to “annoy” police and “use up their resources.”

Putting aside the absurdity of a university declaring that “ideas are illegal,” it is exceedingly unlikely that Meyers’ remarks are not protected by the First Amendment.

UMPD has been embroiled in controversy for weeks since university officers were seen helping local police quell protests that followed the police killing of Daunte Wright. Crowd control tactics that day included use of pepper balls, flashbangs, and tear gas. Those events, coupled with what students described as Clark’s failure to act “on the countless accusations of discrimination” on campus, prompted the Minnesota Student Association — the undergraduate student government at the University of Minnesota-Twin Cities — to call for his resignation last week.

In a short video clip of the April 14, 2021, executive board meeting of the Minnesota Student Association, Chief Financial Officer Lauren Meyers was asked, “When you say ‘disrupt UMPD,’ what exactly do you mean by that?”

She responded, “Make their lives hell. Annoy the shit out of them … Like, use up their resources. Make their officers show up to something.”

Backlash against Meyers was swift. In a joint statement, the Minnesota Police and Peace Officers Association and Law Enforcement Labor Services, which represents UMPD, decried Meyers’ words as “repulsive and dangerous” and called on the university administration “to initiate an investigation into this incident for Student Code of Conduct violations” and to “have an outside agency conduct a criminal investigation into this incident to determine if charges are warranted.” The unions’ press release includes a list of state statutes and student conduct policies they believe apply to Meyers’ conduct.

A spokesperson for the university slammed Meyers’ remarks in an interview with Alpha News, saying, “These ideas are illegal and would directly conflict with ongoing efforts to keep our campus community safe.”

Putting aside the absurdity of a university declaring that “ideas are illegal,” it is exceedingly unlikely that Meyers’ remarks are not protected by the First Amendment.

To the extent that her remarks, or the letter issued by the Minnesota Student Association, encourage others to take action of any sort, a general call for future action — including unlawful action — remains protected speech because its timing is at some indefinite point in the future. Advocacy of “lawless action” is only unprotected incitement if it is intended and likely to result in imminent unlawful activity. It’s also not clear that Meyers was advocating unlawful activity: It is generally lawful to be annoying to police, and the First Amendment continues to protect speech even if it causes “public inconvenience, annoyance, or unrest.” It would presumably also be lawful to report petty crimes — say, jaywalking — to police officers, provided those reports are truthful. It would not be lawful to make false reports to the police, but Meyers did not say others should file false police reports.

And, of course, nothing about Meyers’ comments indicates that she has already done anything prohibited by Minnesota law, despite claims by the police unions that her speech may violate criminal law or university policy.

That’s not to endorse (or condemn) the speech itself. But when those representing law enforcement officers call for action that jeopardizes the First Amendment rights of their critics, they risk undermining public confidence that police understand the law. As the Supreme Court has explained, police “may reasonably be expected to ‘exercise a higher degree of restraint’ than the average citizen” in how they respond to public criticism — at least in performing their official functions — as the freedom to voice “oppos[ition] or challenge police action without thereby risking arrest is one of the principal characteristics by which we distinguish a free nation from a police state.”

FIRE urges the university’s administration to show restraint and respect for freedom of expression, as controversial as Meyers’ words may have been, by rejecting calls for investigations or punishment.