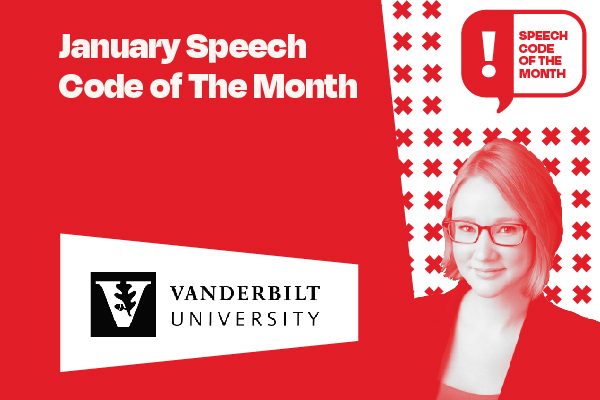 In November, Vanderbilt University changed its “Student Discrimination” policy. The updated policy allows Vanderbilt’s Equal Opportunity and Access office to take action against conduct that doesn’t actually violate the policy, but that it determines “is otherwise inconsistent with the University’s values.”

That determination can be made before an investigation is even opened, and “cannot be appealed.” This chilling new policy is FIRE’s Speech Code of the Month for January.

FIRE sees catch-all policies like this from time to time — ones that define prohibited misconduct, yet reserve the right to take action against conduct that does not meet that definition. Such policies leave students guessing at what could actually land them in trouble, and thus, defeat the purpose of having a written policy in the first place. But the lack of any opportunity to appeal in Vanderbilt’s policy stands out, as students have no recourse following its abusive application by an administrator.

The policy is vague about what sort of action the administration might take after determining that conduct is inconsistent with the university’s values, merely stating, “the University may take action to mitigate the effects of the conduct and to prevent its recurrence.”

The policy goes on to list examples like “providing mandated training and education for students and/or employees, including tailored requirements for the identified respondent(s),” and “revising and publicizing the University’s policies on discrimination, harassment, and/or retaliation.”

Vaguely warning students that action will be taken against them because of speech administrators determine is inconsistent with university values.

This means that if a student is reported for harassment over their subjectively offensive speech and an administrator determines that their speech doesn’t actually constitute harassment, the student can still be subjected to whatever “action to mitigate the effects of the conduct” the school wishes to take, without the chance to appeal the decision.

While that action might not take the form of formal punishment, the institution of mandatory “training and education” in response to speech that is protected under First Amendment standards is likely to have a chilling effect on student speech. After all, if you hear that you may be dragged into an administrator’s office and subjected to vague educational requirements because administrators claim that your speech doesn’t comport with university values, you may feel discouraged from speaking out on controversial issues or engaging in debate with classmates.

And sure, universities can change their policies whenever they want, but reserving the right to change a policy just because a student’s conduct is found not to violate it sounds like moving the goalposts on students.

Vanderbilt must revise this policy and provide students the free speech and due process rights it has promised them.

Though Vanderbilt isn’t a public university bound by the First Amendment, the institution of policies that cast a chill over campus speech is incongruous with Vanderbilt’s commitment to freedom of expression. Elsewhere in official policy, Vanderbilt states that it is “firmly committed to academic freedom and freedom of expression, and will maintain the conditions of freedom of inquiry, thought, and discussion on campus.”

Vaguely warning students that action will be taken against them because of speech administrators determine is inconsistent with university values, without providing recourse for students to challenge such determinations, does indeed threaten the condition of freedom of inquiry, thought, and discussion on campus. Vanderbilt must revise this policy and provide students the free speech and due process rights it has promised them.