For the third year in a row, New York’s State Senate passed a bill that would prohibit student organizations at state universities from eligibility for student fees if they “directly or indirectly” encourage or permit “intolerance, hate speech or boycotts” against some (but not all) allies of the United States. And, once again, the legislative session draws to a close without the measure passing in the New York Assembly, preventing it from becoming law.

This iteration of the measure, Senate Bill S2493, attracted bipartisan sponsorship and passed the State Senate on Wednesday by a vote of 48 to 12. The first version of the bill, introduced in 2016 as Senate Bill S8017, which likewise passed the State Senate, borrowed language from a “blacklist” created at the direction of Governor Andrew Cuomo that similarly applied to anyone who “promote[s] others to engage in” boycotts of Israel. (A number of states have also introduced laws concerning contracts with people or entities that boycott Israel, including contracts with speakers on college campuses.)

The bill would ban public universities from funding not only student organizations that engage in boycotts themselves (expressive activity itself protected under the First Amendment), but also bar funding for any organization that so much as dares to express support for or “directly or indirectly promotes, encourages, or permits” boycotts of certain nations, or “intolerance” or “hate speech.”

The First Amendment has no exception for “intolerance” or “hate speech.”

The definition of “boycott” is also incredibly broad, encompassing “any activity … that will result in any person abstaining from commercial, social or political relations, with any allied nation” with the “intent to … cast disrepute upon … such allied nation.” That’s more than refusing to do business with a particular state. By its plain language, the definition would prohibit speech encouraging political leaders to reconsider relationships with any allied nation.

What constitutes an “allied nation” is also difficult to divine, relying on a list of treaty organizations (NATO), treaties (the Southeast Asia Treaty of 1954 or the Rio Treaty of 1947, except Venezuela), and individual states (Ireland, Israel, Japan, and the Republic of Korea). So we made a map of which states could or could not be criticized under this proposal: 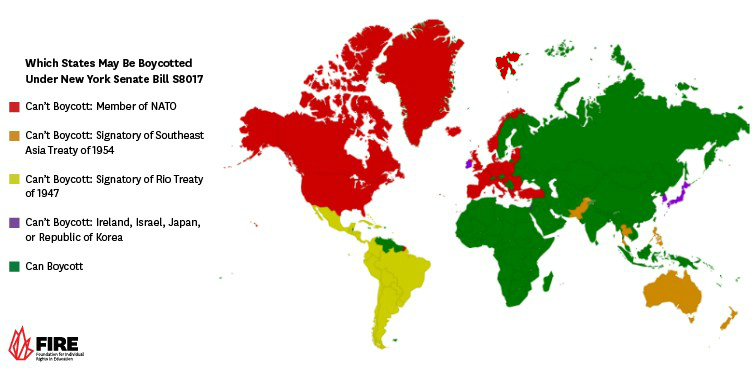 As we’ve said repeatedly, this bill is flatly and obviously unconstitutional. What motivates New York’s state senators to waste their time in repeatedly introducing and passing a measure that has no hope of surviving even the slightest judicial scrutiny is beyond us. However slim the chances might be that the proposal could ever become law, that a bill that would suppress students’ First Amendment rights has cleared the New York State Senate three times is alarming.