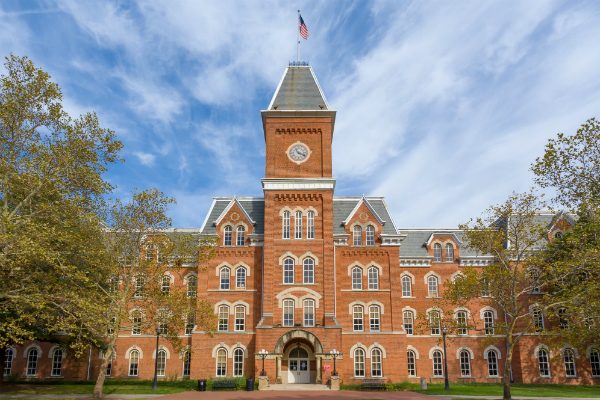 Earlier this month, two universities in central Ohio removed flyers and stickers proclaiming “It’s okay to be white,” as well as those purportedly promoting the white nationalist organization Patriot Front, from their campuses. And once again, the FBI is reportedly investigating the postings, adding more data points to an apparent trend towards involving the FBI and other law enforcement agencies in investigations of on-campus expression based solely on the viewpoint of that expression.

On Nov. 1, approximately 25 stickers promoting Patriot Front were discovered posted around academic and residential areas of Ohio Wesleyan University’s campus. According to student reporters for The Transcript, the stickers included phrases allegedly associated with the organization, such as “America is not for sale,” “Reject poison,” and “Stolen not conquered.”

Ohio State’s posting policy must comply with the First Amendment and apply only viewpoint- and content-neutral time, place, and manner restrictions on posted materials.

The Columbus Dispatch reports that President Rock Jones of Ohio Wesleyan sent an email to students in response to the stickers, stating, “The hate and prejudice expressed by such organizations are absolutely contrary to the values we hold at Ohio Wesleyan University, and the promotion of those ideas on our campus is deeply upsetting — and threatening — to many of us.”

In a follow-up email, President Jones also informed students that the university is working with the FBI to investigate. Earlier this week, Vice President of Student Engagement and Success Dwayne Todd told The Transcript that Ohio Wesleyan received a list of similar incidents the FBI is investigating at other central Ohio campuses, including Capital University, Ohio Dominican University, Columbus State Community College, Otterbein University, and Ohio State University.

This follows reports of “It’s okay to be white” flyers on Ohio State’s Columbus campus, and it is the latest in a string of similar postings, including the appearance of “It’s okay to be white,” “Islam is right about women,” and the so-called “Kekistan” flag at Western Connecticut State University. Ohio State spokesman Ben Johnson stated that the flyers were removed in accordance with the university’s posting policy.

It’s unclear from the reporting where the flyers were posted on Ohio State’s campus, or whether the postings could constitute vandalism (which would be unprotected regardless of the message expressed). The same is true at Ohio Wesleyan, though the reports do suggest that the flyers and stickers were posted by non-student members of Patriot Front. Regardless, setting a precedent in which campus expression is investigated by law enforcement based solely on whether the viewpoints being expressed are objectionable risks politicizing such investigative efforts and will chill the speech of anyone whose viewpoints are outside of the mainstream. FIRE knows from experience that calling the cops on campus speech threatens those with beliefs across the political spectrum. For example, Ivette Salazar, a plaintiff in one of FIRE’s Stand Up For Speech Litigation Project cases, was detained by campus police at Joliet Junior College after she handed out pro-socialism flyers on campus. At Rensselaer Polytechnic Institute, campus security told students who were distributing flyers critical of the university administration outside a hockey game that they could not do so, citing eminent domain.

FIRE knows from experience that calling the cops on campus speech threatens those with beliefs across the political spectrum.

These investigations also highlight the fact that over the last decade, colleges and universities have increased their use of technology to conduct surveillance of students on campus. Where schools could previously gather data about how often students visited certain campus facilities — the library, the dining hall, and more — on a piecemeal basis, they can now all but track a student’s location in real time using information gathered from WiFi connections. The prospect of colleges and universities inviting federal investigators to campus, and even sharing this wealth of data with them, in response to incidents of offensive or controversial expression on campus greatly increases the prospect of both on- and off-campus investigation into and sanction of protected expression.

If this concern seems far-fetched, consider that just last month the University of Connecticut used card swipe records and data gathered from WiFi connections at a university-owned apartment complex to identify two students who were filmed on Snapchat uttering racial slurs. UConn police subsequently arrested both students. This is an extreme example, but as the universe of information colleges and universities hold about their students grows, so does the risk that they will abuse it.