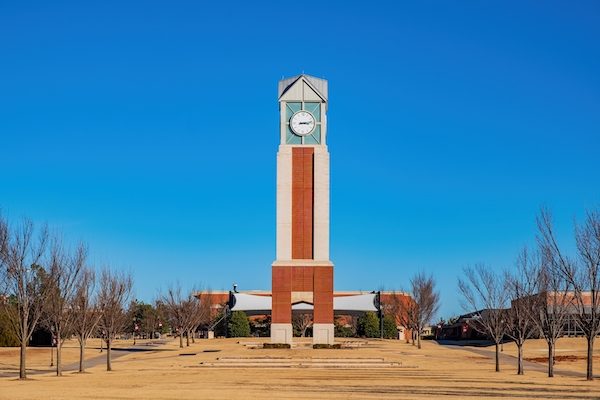 What happens when a religious school “committed to the highest ideals of Christian education” also says its mission “demands freedom of inquiry and expression”? Faculty may be blindsided by punishment for speech they had every reason to think was protected.

On Sunday, OKCFOX reporter Rebecca Pryor reported on the controversy, including screenshots of a social media post from O’Keefe’s wife with additional details.

I’ve now seen several students speaking out on social media after an @okchristian educator was allegedly fired for bringing in a gay guest speaker.

The following is a fb post from the professor’s wife⤵️ pic.twitter.com/rZWFgPeNcv

If the reported reasons for OC’s termination of O’Keefe are accurate, the university has abandoned its commitments to free speech and academic freedom.

As a private institution, OC is not bound by the First Amendment, but the university chooses to make strong promises of expressive freedom — promises it must keep. Although OC purports to place certain limits on these rights in line with its religious mission, these limits are not at all clear, and their apparent application in O’Keefe’s case conflicts with lofty policy language protecting free speech and academic freedom.

When free speech and other values collide

FIRE recognizes private universities are not required to promise expressive rights for their students and faculty. As our Spotlight on Speech Codes 2022 report explains:

FIRE believes that free speech is not only a moral imperative, but an essential element of a college education. However, private universities, as private associations, possess their own right to free association, which allows them to prioritize other values above the right to free speech if they wish to do so.

The First Amendment right of free association enables like-minded individuals to band together in pursuit of common interests, goals, or values, such as shared religious beliefs.

FIRE has long acknowledged that not everyone shares our dedication to free expression, and “it is important for students and faculty members to have the choice to attend an institution that prioritizes certain values that depart from a traditional college experience.” We give a “warning” rating to private universities that clearly and consistently state that they hold a certain set of values above freedom of speech, so prospective students and faculty are aware of the limits on expressive rights at those institutions.

At the end of the day, OC’s policies do not give fair notice to its faculty of the supposed limits on their academic freedom.

But problems arise when a university sends mixed messages — when it makes rousing endorsements of free speech one moment, but suggests its constituents’ speech is not actually free the next. When free speech is part of a confusing and shifting hierarchy of competing values, students and faculty are left without a clear understanding of their expressive rights.

Private universities that wish to privilege other values above free speech should leave no doubt of this fact, nor of the precise extent to which expressive rights are limited. Campus community members must have fair notice of these limits. Only then is an administration justified in enforcing them.

Take OC’s policy regarding outside speakers, which seems clear enough — at first:

A faculty member may invite speakers of all political ideologies to speak in their classes on topics relevant to their subject matter.

But OC adds this caveat:

This freedom does not, however, extend to: giving the impression that the faculty member speaks for the University; attempting to use the University to further a personal political agenda; materially detracting from the purpose of the class; or undermining the mission of the University. [Emphasis added.]

Other passages in OC’s Academic Policy Manual similarly make what appear to be unequivocal promises of academic freedom, before noting vague standards for restricting expression. For instance, OC “embraces and celebrates openness, the inclusive spirit of Jesus, and an unrelenting search for truth,” adding that the “mission of the University demands freedom of inquiry and expression.” The manual states: “All members of the Christian academic community, and especially the Faculty, must feel safe to pursue ideas, to challenge popular opinion, and to explore evidence wherever it may lead.” What’s more:

Within the guiding principles and limitations set forth in this policy, members of the Oklahoma Christian community are free to pursue scholarly inquiry, publish their results, and discuss controversial subjects and viewpoints relevant to their academic area without undue restriction or fear of reprisal from sources inside the University.

The manual also expressly recognizes faculty members’ right to teach controversial material, though it is “expected . . . that a spirit of Christian charity, common faith, and loyalty to the unique University mission will prevail and that questions will be raised in ways that seek to strengthen rather than undermine faith.”

Another section notes the “heavy responsibilities” of faculty to “support the tenets of the institution and acknowledge the authority of the Scriptures.” It states the university “should impose limitations on academic freedom only when there is clear and present harm to the institutional mission and integrity,” but any such limitations “should be narrowly construed so as not to impede the interchange of ideas.”

These policies are not a model of clarity. They’re what happens when a university tries to have it both ways: boasting of a commitment to the values of free thought and inquiry that many expect of an institution of higher education, while reserving the ability to shirk that commitment in service of some competing interest. But despite vague references to restrictions on academic freedom, OC does not clearly and consistently subordinate free speech and academic freedom to other values, with precise limits on these rights that faculty members can readily understand. To the contrary, the Academic Policy Manual more than once affirms the consistency of these values with its religious purpose.

At the end of the day, OC’s policies do not give fair notice to its faculty of the supposed limits on their academic freedom. A faculty member reading these policies could reasonably conclude that he retains a robust right to present and discuss unpopular ideas, or to invite controversial speakers to class, and that these exercises of academic freedom are consistent with the university’s mission. OC must enforce its policies consistent with that reasonable expectation. In O’Keefe’s case, that means not punishing him for inviting a guest speaker consistent with OC’s free speech and outside speaker policies.

If OC wants to punish faculty members for hosting a controversial guest speaker, it should not be telling them they are “free to pursue scholarly inquiry, publish their results, and discuss controversial subjects and viewpoints relevant to their academic area without undue restriction or fear of reprisal from sources inside the University.”

But the university makes exactly that promise.

OC must take steps to clarify that its written commitments to free speech and academic freedom have real meaning, and will not be ignored anytime a controversy arises.