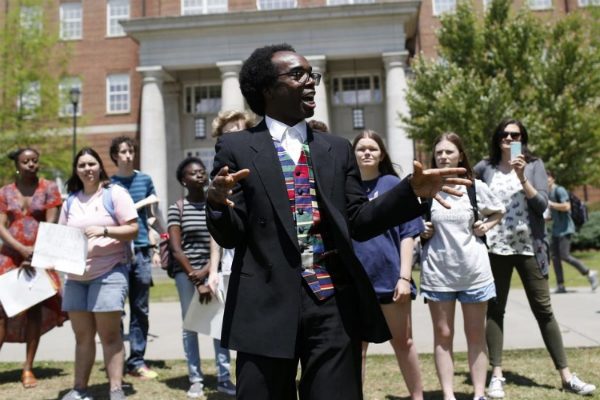 A three-member panel at the University of Georgia decided Tuesday that philosophy graduate student and teaching assistant Irami Osei-Frimpong did not violate the university’s code of conduct, rejecting charges of providing false information on his grad school application. The charges were brought after UGA announced that it was “vigorously exploring all available legal options,” following public demands that Osei-Frimpong be disciplined for comments about “crappy white people” at a political meeting and on his social media accounts.

The decision spurred FIRE’s third letter this year to UGA President Jere Morehead, who has ignored repeated calls to confirm that Osei-Frimpong will not be punished or further investigated for his constitutionally-protected speech.

In September, then-student Andrew Lawrence recorded Osei-Frimpong speaking at a meeting of the Young Democrats of UGA, where the TA spoke about civil rights and his perspective as an activist. Lawrence recorded himself confronting Osei-Frimpong about what Lawrence called “negative rhetoric against white people when you don’t know every white person” at UGA. Lawrence posted the video online four months later, citing for the delay a “fear of backlash from the University of Georgia and other students.”

Lawrence’s frustration with Osei-Frimpong reportedly stemmed from political statements on the TA’s Facebook. One post alleged that Democrats should “go to war on the White electorate” and “dismantle the institutions that make crappy white people: their churches, their schools, their families.”

Lawrence posted an open letter on social media alleging that Osei-Frimpong represented a threat to the “safety and well-being” of UGA students, and called on alumni to withhold donations to the university.

UGA released a statement on Jan. 18 correctly acknowledging that Osei-Frimpong’s speech was expressed “in his capacity as a private citizen” under the First Amendment. As a public university, UGA is legally obligated to respect student and faculty First Amendment rights.

Two days later and amidst mounting attention in the press and on social media, UGA released a second statement, this time announcing that the university was “vigorously exploring all available legal options” and seeking guidance from the attorney general’s office regarding “what actions we can legally consider in accordance with the First Amendment.”

UGA is reminded of its First Amendment obligations

Concerned by the university’s troubling departure from their laudable initial statement, FIRE sent a letter to Morehead on Jan. 25, calling for the university to “immediately abandon” any investigation and reminding him of the well-established First Amendment rights that protect Osei-Frimpong’s speech. FIRE reminded Morehead that the First Amendment “does not permit UGA to subject the expressive rights of faculty members or students to the whims of donors, students, or members of the public who find those views uncomfortable, objectionable, or deeply offensive.”

UGA’s fishing expedition gets a bite, but no fish

After UGA’s quest for “all available legal options” was announced, a former staff member anonymously re-reported her concerns that Osei-Frimpong’s grad school application had not disclosed his prior enrollment at the University of Chicago and a 2011 arrest during an Occupy Chicago protest. Yet, as the hearing panel’s opinion explains, Osei-Frimpong’s purported omission wasn’t found to be an indication of dishonesty, as one of his recommendation letters was from a colleague at the University of Chicago and the arrest never culminated in charges (which is what the application asked him to disclose). In fact, the arrest was later declared by a judge to have been an unlawful infringement on Osei-Frimpong’s First Amendment rights. Moreover, the timing of the allegation raised questions about whether the allegation was brought about by the university’s investigation into Osei-Frimpong’s speech, and whether the university would have pursued the charges in the absence of the controversy. When the staff member who reported the alleged omission first learned of it, they apparently didn’t think it was worth pursuing until after the university began seeking legal options.

In April, FIRE joined with the local ACLU and PEN America, a pro-free expression organization focusing on literature and human rights, to again call on the university to drop the investigation and affirm Osei-Frimpong’s speech rights.

Osei-Frimpong told the Athens Banner-Herald that he believes the administration put him through the gauntlet because of his political expression.

“According to the investigative report, all of these people had the discretionary power to resolve this situation months ago; instead, they loaded down a panel of students and one staff person with the responsibility with presenting, adjudicating, and dismissing the Administration’s hastily contrived case,” he said. “It strikes me that either each one of these people is very bad at his/her job … or their job was to hassle me and send a message about how the University Administration retaliates against political speech.”

As FIRE’s May 7 letter explains, even assuming that the university would have brought these charges in the absence of the controversy and public pressure, the context and course of UGA’s investigation leaves a chilling effect unaddressed by the university’s administration. In backtracking from initial statements that correctly observed that Osei-Frimpong’s speech was protected and mounting a “vigorous” search for legal options, UGA — intentionally or not — sent a strong message to students and faculty members that university officials will look for any legal way to punish speech if enough outrage is drummed up. Students and faculty members must be assured that pressure from donors will not determine whether one’s speech results in censorship, a six-hour-long hearing for trumped up charges, or worse.

UGA was right on Jan. 18 when it said that Osei-Frimpong is protected by his First Amendment rights, and the university’s administration exercised the full breadth of its lawful options in condemning views it finds unwelcome. However, almost every step the university took after that was a misstep.

Until UGA clearly affirms that it will not launch investigations into constitutionally-protected speech, students and faculty are left to wonder whether political expression in Georgia can be punished by the highest bidder.