University of Pennsylvania Law School Professor Amy Wax has been at the center of ongoing controversy over her comments on race and immigration policy. Yesterday, Penn Law’s student government held a town hall meeting to discuss “the Amy Wax situation,” at which Dean Ted Ruger — who removed Wax from teaching certain classes and who has taken a strong stance against her views — agreed to “speak on issues regarding Amy Wax” and ways to “address the situation.”

There was one voice conspicuously excluded from this semi-official meeting, however: that of Professor Wax herself. 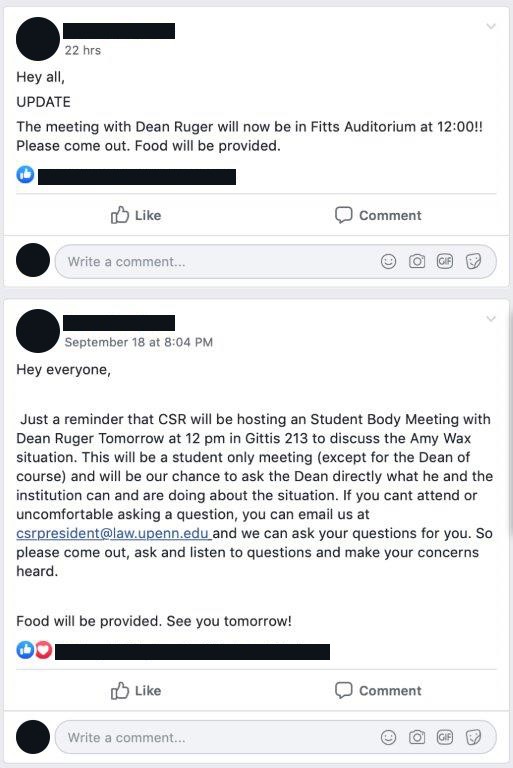 Wax tells FIRE that nobody — not even her boss, Dean Ruger — told her that he and the student government were involved in such an event.

“This conversation should not have occurred without my knowledge and presence,” Wax said. “To do otherwise is sneaky, dishonorable, uncollegial, and damaging to me as a member of the faculty.  The danger of unmet and unsubstantiated allegations was enormous.”

Wax said that had she been invited, she would have attended to respond to questions and participate in the discussion.

Professor Wax was removed from some of her teaching duties last year after she made comments regarding the performance of Penn’s black law students during a podcast discussing affirmative action. She also faced scrutiny this summer for allegedly advocating for a national immigration policy that favors immigrants from developed countries.

Ruger recently announced plans to expand diversity and inclusion initiatives. The Daily Pennsylvanian reported earlier this month that Ruger made the announcement in an email to the Penn Law community, highlighting speech he deemed “exclusionary.”

“We recognize that these expanded programs carry increased urgency this semester as they come in the midst of a time when our school, and our nation, have been called upon to confront increasingly extreme and exclusionary rhetoric,” Ruger wrote.

Penn Law spokesperson Steve Barnes told FIRE via email that the Wax event “was a student government-sponsored and initiated event, advertised by students as a law student-only meeting, to speak directly to the dean and ask questions about Professor Wax and recent diversity initiatives.”

“No faculty were invited, or attended,” Barnes said.

“The [student government] requested the event, but the Dean agreed to attend, and I was the main topic of discussion,” Wax said. “I consider it improper for him to participate in an event, and ‘answer questions’ about me without me present to hear comments and concerns.”