From April 13 through May 3, a group of students at Princeton University are asking, “What will you bring to The Surface?”

“The Surface” is an interactive art installation consisting of approximately 224 square feet of white wooden boards set up on the lawn on which anyone can draw or paint—or even censor— the work of visitors before them. Veterans of free speech walls would not be surprised by what the students have brought to the installation thus far: a range of thought-provoking questions, angry rants, cute drawings, some profanity—and the inevitable penis drawing. But the last of these was apparently a step too far for Princeton administrators. A panel containing such an illustration was removed, and was returned to the project’s creators only when the offending material was painted over. 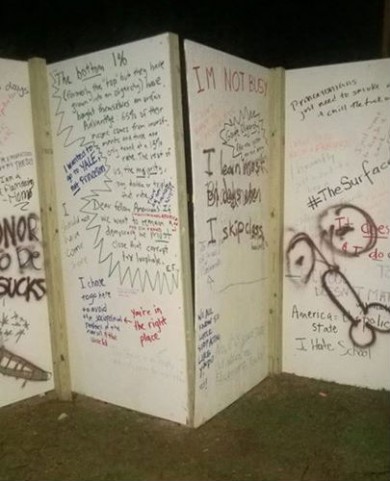 The creators of The Surface relayed details of the panel’s removal on April 15 through the project’s Twitter account. Grounds manager Albert Pearson told the students that University Building Services received a complaint about the “graphic content,” and Pearson cited a provision of the university’s conduct code on property destruction. It would be disingenuous to argue, though, that the drawing constitutes “willful damage or destruction of the property of others,” considering that the students erected the wall precisely to serve as a canvas for anything visitors wish to add to it.

Interestingly, if the complaining party had simply painted over the offensive drawing, that action would have comported with the rules of The Surface. For an administrator to hold the full panel hostage, though, is a different story, and it violates the clear promises of free expression the university makes to its students. The Surface’s creators made clear that this particular act of censorship was different from those carried out by students directly, labeling the whitewashed portion of the board “CENSORED BY ORDER OF THE UNIVERSITY.”

Thankfully, The Surface sparked a dialogue among many students, even some who were at first inclined to censor certain messages:

Upon learning more about the project and how people are invited to censor it themselves, [Nathan] Jones said he considered painting over parts, but he ultimately decided not to. Instead, he contacted Buse Aktas ’14, one of the creators of the project. His comments appear in a post on the project’s Facebook page.

It is encouraging to see that even when censorship is an option, many will choose instead to add more speech to the “marketplace of ideas.” But the discussion didn’t stop at Jones’ objections:

“It seems like people are just being immature, rather than actually expressing themselves,” Jones wrote. “Is this what The Surface was intended for, or is it being abused?”

Another commenter responded via Twitter: “Are these mutually exclusive?”

Indeed, as The Surface notes, free expression—in which its creators intended students to engage—may sometimes be immature. But in an article for The Daily Princetonian, student David Will illustrates exactly why free speech can’t be limited based on this sort of subjective assessment:

Everyone with whom I spoke sorted the writings into three categories: the humorously raunchy, the peculiar or even offensive and the things they themselves felt but couldn’t muster the words to say. Each statement, it seemed, could be placed in any of those three boxes, depending on whom you talked to.

Ultimately, The Surface is proving to be a valuable work on many levels. Contributors are inspiring conversations on issues relevant to the student body, visitors are encouraged to act on or reconsider their urges to censor, and the Princeton community is now more aware of the steps the administration might take to silence certain expression.

Head over to The Surface’s Facebook page for more information about the project, including pictures, video, and ongoing discussion. FIRE applauds the creators of The Surface for providing members of the Princeton community with this opportunity to express themselves, and calls on Princeton to allow the project to proceed unhindered.

Images via The Surface and The Daily Princetonian