This past Sunday, FIRE wrapped up its sixth annual FIRE Student Network Conference. This three-day conference was the largest in FIRE’s history and arguably its most important conference to date due to the discussion surrounding FIRE’s Stand Up For Speech initiative.

The conference was off to a roaring start Friday night with Lenore Skenazy’s fun and thought-provoking keynote speech. With the help of a Pop-Tart, Skenazy discussed the harmful parenting trend of treating potential harm as real harm and how this has played a role in creating college students who are all too passive about overbearing speech codes. Sadly though, real harm came to the conference’s seven-foot Free Speech Ball, which met its ultimate demise later on in the night when it popped. The Free Speech Wall, thankfully, survived the whole weekend.

Despite this tragedy, students moved forward Saturday morning when FIRE staff addressed the conference. Most notably, FIRE’s Catherine Sevcenko joined Robert Corn-Revere of the law firm Davis Wright Tremaine in introducing attendees to FIRE’s Stand Up For Speech Litigation Project. Corn-Revere discussed the four lawsuits filed on July 1 against Iowa State University, Citrus College (California), Ohio University, and Chicago State University, all of which have policies that violate the First Amendment rights of their students—and, in the case of Chicago, of their faculty.

After a series of breakout sessions with FIRE staff, Saturday closed with a keynote speech from Jonathan Rauch on the importance of protecting “hate speech” in regards to civil rights movements. Rauch expressed this by arguing that all ideas should be protected in order to promote public debate on controversial topics. His speech was followed by an impromptu forum on trigger warnings moderated by Rauch. Students were allowed to, literally, stand up for speech and express their concerns about or support for institutionalized trigger warnings on campuses.

On Sunday, the conference wrapped up with a student panel on campus outreach featuring Caitlin Grimes of Marshall University, Andrew Guernsey of Johns Hopkins University, and two of the first Stand Up For Speech plaintiffs, Anthony Vizzone of the University of Hawaii at Hilo and Isaac Smith of Ohio University. After closing remarks from FIRE President Greg Lukianoff, students were urged to return back to their campuses to defend free speech.

If there is any question about the success of this conference, readers are urged to search the #freespeech14 tag on Twitter, Facebook, Instagram, Vine, and Tumblr. Here are some of our favorites from Twitter: 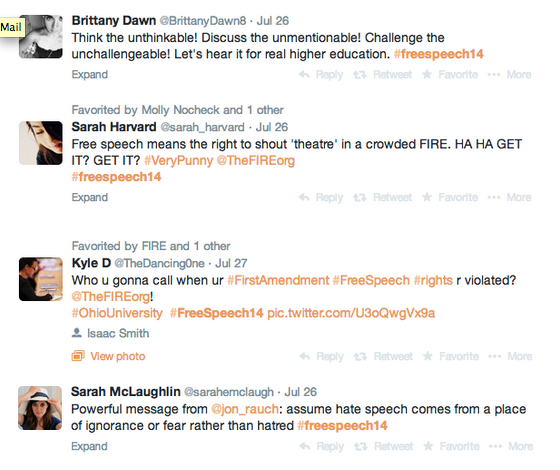