PHILADELPHIA, Dec. 11, 2018 — The vast majority of students at America’s top colleges and universities surrender their free speech rights the moment they step onto campus, according to a new report from the Foundation for Individual Rights in Education.

Released today, Spotlight on Speech Codes 2019: The State of Free Speech on Our Nation’s Campuses analyzes the written policies at 466 of America’s top colleges and universities for their protection of free speech. The report finds that 89.7 percent of American colleges maintain policies that restrict — or too easily could restrict — student and faculty expression. All of the analyzed policies are accessible in FIRE’s Spotlight Database. FIRE rates schools as “red light,” “yellow light,” or “green light” based on how much, if any, speech protected by the First Amendment their policies restrict.

“Most colleges impose burdensome conditions on expression by maintaining policies that restrict students’ free speech rights,” said FIRE Senior Program Officer Laura Beltz, lead author of the study. “Colleges should be a place for open debate and intellectual inquiry, but today, almost all colleges silence expression through policies that are often illiberal and, at public institutions, unconstitutional.”

More than a quarter of institutions in the report (28.5 percent) received FIRE’s poorest, red light rating for maintaining speech codes that both “clearly and substantially” restrict freedom of speech. 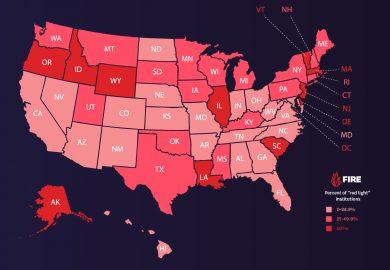 Only 9 percent of institutions (42 schools) do not maintain any policies that compromise student expression, earning FIRE’s highest, green light rating. This total is up from only 2 percent in 2009. Meanwhile, the number of institutions earning a yellow light rating is swelling: from 21 percent in 2009 to 61 percent today. While less restrictive than red light policies, yellow light policies still prohibit or have an impermissible chilling effect on constitutionally protected speech.

“Many states have made incredible strides toward eliminating speech codes — whether that’s through collaboration with FIRE, legislative action, or nudging from peer institutions,” said Beltz. “In other states, too many students are left to fend for themselves to protect their rights against policies that — whether explicitly or covertly — erode student expression.”

Neither public nor private colleges have a monopoly on silencing students and faculty members. Just over 90 percent of public colleges maintain policies that don’t live up to their free speech obligations under the First Amendment.

Spotlight on Speech Codes 2019: The State of Free Speech on Our Nation’s Campuses can be read in full on FIRE’s website, along with previous speech code reports since 2006.