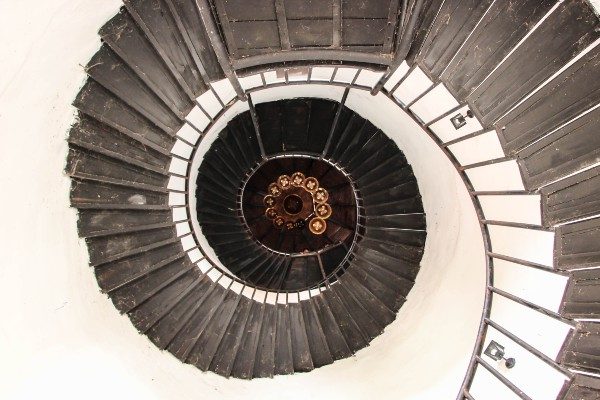 You might think that the idea that certain viewpoints face greater hostility on campus than others would be obvious to anyone following the news cycle around colleges these days. And yet, there persists a skepticism to this idea in both academic scholarship and the media.

These skeptical criticisms typically rely on a handful of data points whose relevance to ascertaining what students think about the state of free expression on their campus are questionable at best. They also fail to differentiate between exaggerated partisan criticisms about the climate for free expression on campus and internal criticisms from within the academy itself that come from scholars concerned about self-censorship on campus, in the classroom, and in scholarly research.

In this post, we’ll briefly review the spiral of silence theory and then look at some campus-specific data. As the data will show, there is a dominant viewpoint evident on each of these campuses analyzed and that a notable portion of students appear to self-censor their opinions because they do not hold this dominant viewpoint. Furthermore, self-censorship even occurs among some politically liberal students. This state of affairs suggests that the climate for free expression on these different campuses may not be as open as data aggregated at the national level may suggest.

Campus-specific data included in these analyses

In my last blog, I discussed data from a number of the campuses that you will see below. Additional data for this post comes from three different samples, one collected from California Polytechnic State University in the fall 2013 and winter 2014 terms. The other two were collected from Rutgers, The State University of New Jersey, during the 2018 spring and summer semesters.

The theory about a spiral of silence for minority opinions and viewpoints was first proposed in 1974 by Elisabeth Noelle-Neumann. This theory suggests that people possess a “quasi-statistical sense” that allows them to conclude whether their opinion on a given issue is in the majority or minority. Because people are social beings who are motivated to avoid ridicule, isolation, and ostracism from individuals in their immediate community, and because they fear reprisal or vengeance for running afoul of others, deviant opinions tend to be expressed with increasingly less frequency.

In other words, minority opinions experience a spiral of silence and ultimately only a few hardcore true believers are left openly expressing the deviant viewpoint. This can distort perceptions of how widely the prevailing opinion is held and how many people hold a deviant viewpoint. This can make it appear that the opinion of the majority of people is overwhelmingly popular and that there are only a few hard-core true believers who hold deviant views. Although spiral of silence theory is somewhat difficult to study empirically in the laboratory or in naturalistic settings, multiple meta-analyses support the veracity of a spiral of silence effect, particularly for political opinions.

A majority viewpoint on campus

A long-running criticism of colleges and universities is that they are overwhelmingly politically liberal bastions hostile to conservative ideas and viewpoints. This criticism is usually directed at faculty who are overwhelmingly liberal or left-leaning, although the political leanings of campus administrators have also been highlighted. Nevertheless, there remains considerable variability between the faculty on different campuses and there are still some campuses where politically conservative faculty may actually constitute a majority, such as Brigham Young University. 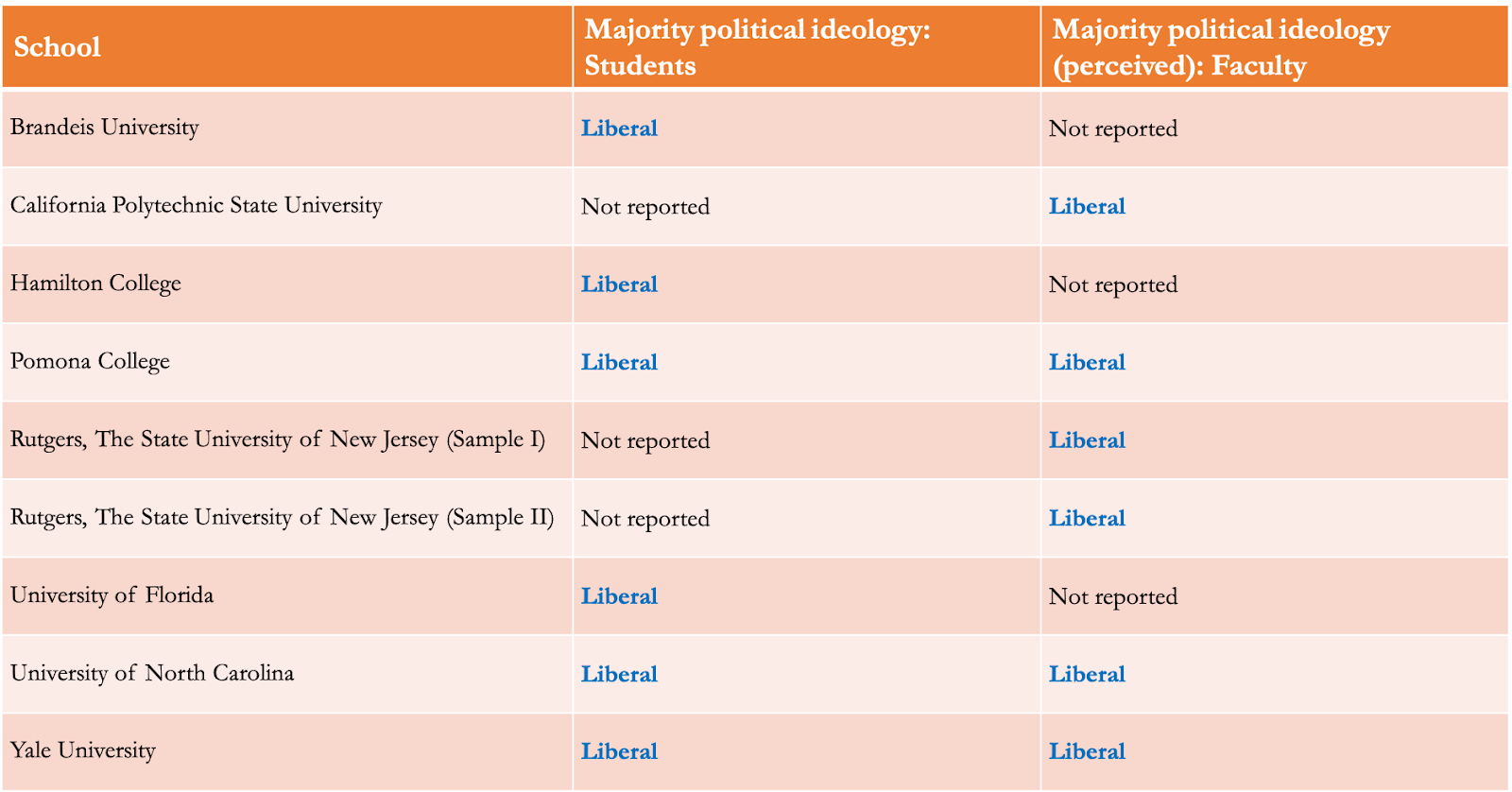 Given the ubiquitousness of liberalism on these campuses, spiral of silence theory would predict that non-liberal viewpoints are expressed with less frequency and may even encounter some hostility. Evidence supporting this prediction comes from national data and from some of the individual campuses analyzed here.

First, in 2017 and in 2019 the Knight/Gallup surveys on students’ attitudes toward free expression asked students if on their campus individual members from a variety of on-campus groups are able to freely express themselves. In both years, conservative students were identified as the student group least able to freely express themselves on campus. Although conservative students were considerably more likely to report this, a notable portion of moderate and liberal students did as well.

The University of Nebraska’s student survey, conducted in partnership with Gallup, also asked this question and found a similar pattern of results. Students on all four of the campuses surveyed reported that politically conservative students were less able to freely express themselves compared to many other student groups. However, in contrast to the national data, the students surveyed at the University of Nebraska perceived transgender individuals, American Indians/Alaska natives, and Native Hawaiians/Pacific Islanders as less able to freely express their views than politically conservative students. In a similar vein, students at the University of North Carolina were asked how often they heard inappropriate comments about different student groups. Students, regardless of their political ideology, identified political conservatives as the group they most often heard inappropriate comments about.

Finally, as can be seen in the table below students at California Polytechnic State University and at Rutgers report something similar. In all three samples, politically conservative students reported experiencing more hostility in the classroom and all students, regardless of political ideology, reported that they perceived this greater rate of hostility. 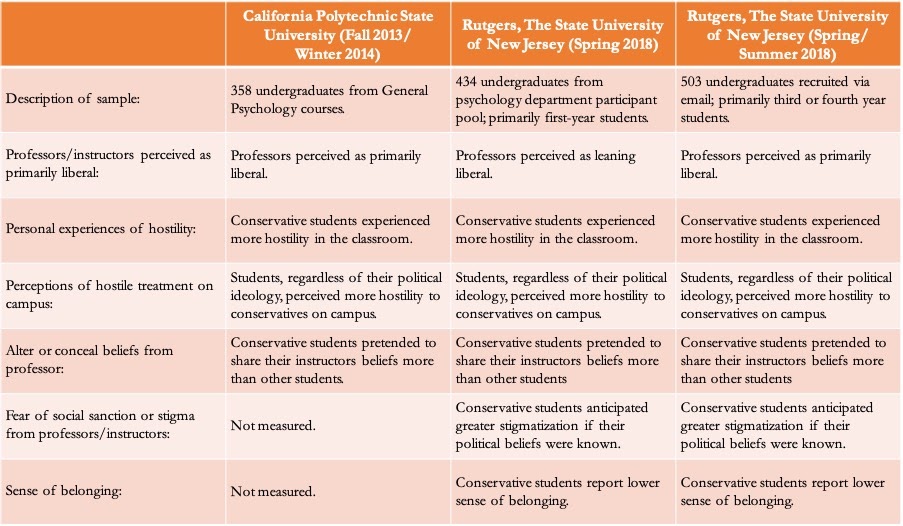 These findings throw some cold water on national-level data that suggests non-liberal students, and in particular politically conservative students, engage across political differences as frequently as their liberal peers. First, asking about frequency of engagement does not tell us about the quality of that engagement or how students felt about them afterward. Second, given that politically liberal views are predominant among students on a number of campuses and are perceived as predominant among the faculty on those campuses, it is not that surprising that non-liberal students have frequent engagement with people who hold different political views. Third, these data demonstrate that on these campuses the students themselves see non-liberal viewpoints as being treated differently and in some cases, politically conservative students report experiencing more hostility.

First, if we refer back to the table above in the previous section it is evident that politically conservative students at California Polytechnic State University and Rutgers were more likely to report that they pretended to share their professor’s views than other students. In other words, students who held a minority viewpoint were more likely to self-censor their own views. Furthermore, at Rutgers, politically conservative students also reported greater anticipated stigma from the professor for expressing their views in the classroom and a lower sense of belonging. This latter finding further establishes that certain students do fear social sanction if they chose to express their views.

Findings from a survey of students at Yale University also show a higher rate of self-censorship among students who hold a minority viewpoint on campus (e.g., moderates, conservatives). Students were asked if they have ever felt intimidated in sharing their ideas, opinions, and beliefs in class because they were different from their professors or from their peers. Almost half of students (45%) reported they felt intimidated doing so when their views differed from their professors, although the portions of moderate and conservative students who reported this was considerably higher than the portion of liberal students who did so. In the case of expressing views different from their peers, over half of students (55%) reported they felt intimidated doing so, and once again this feeling was considerably more predominant among moderate and conservative students. On a positive note, students, regardless of their political ideology, were less concerned that they would receive a bad grade from their professors if they expressed different ideas or opinions.

Meanwhile, data from Brandeis University and the University of Florida, collected by the Steinhardt Social Research Institute indicates that on both campuses a majority of students, regardless of their political ideology, have engaged in self-censorship of their political views around people they do not know.

The findings from a recent extensive report on survey data collected at the University of North Carolina are also largely consistent with those reviewed above. Students were asked if they shared their sincere political views in the classroom how concerned they would be about a variety of potential consequences and about how often they chose to self-censor in a class discussion. Liberal students were less concerned about each of the consequences and also reported engaging in less self-censorship than moderate or conservative students. However, it is important to point out that a notable portion of liberal students reported that they engaged in self-censorship with some frequency and that they were concerned about social sanction for expressing their sincere political views.

Finally, clear and direct evidence of a spiral of silence for minority viewpoints comes from Brandeis University. In 2018 the Steinhardt Social Research Institute surveyed Brandeis students and asked them what their viewpoints on race relations in America, climate change, the Israeli-Palestinian conflict, immigration, guns in America, and sexual assault were. Students were also asked how much social discomfort they experienced when discussing these issues. As can be seen in Table 10 below, taken from page 46 of the report issued by the Steinhardt Social Research Institute, students who held the minority viewpoint on an issue experienced more discomfort when discussing the issue. In some cases the difference in the amount of discomfort between those holding the majority viewpoint and those holding the minority viewpoint is quite stark: 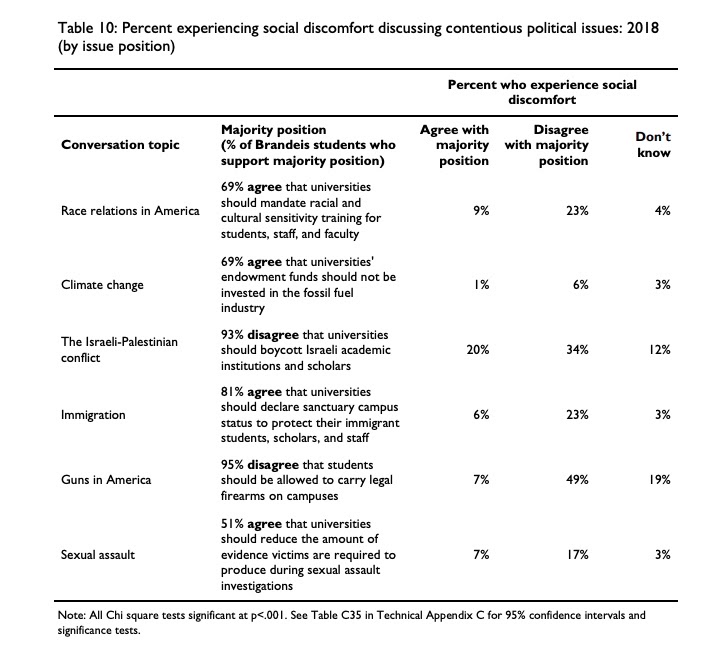