A new survey gauging Americans’ attitudes toward the First Amendment and related issues reveals some troubling attitudes about campus speech, including an uptick in support for disinviting controversial speakers.

Freedom Forum Institute’s 2018 State of the First Amendment survey, released in June, measures “Americans’ changing attitudes toward their core freedoms.” The annual survey has been conducted for more than two decades. It asks a representative subsection of American adults both questions that remain the same every year to measure changes over time, as well as new questions about recent events and trends. 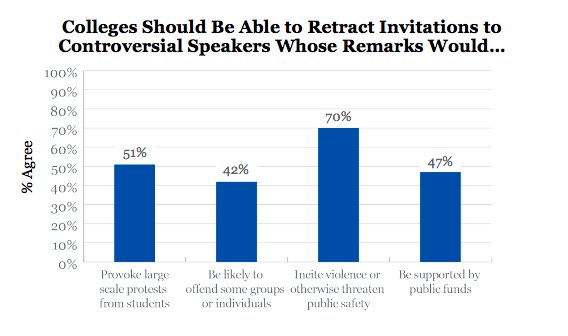 The full report breaks down these answers further, by political party, gender, and age, with perhaps the most discouraging data point showing that the highest subsection of people who support disinvitations over actual or threatened violence (80 percent) are 18–34 year olds — the demographic encompassing the highest number of current and recent college students.

This statistic underscores FIRE’s fears that actual or threatened hostility over controversial speech — also known colloquially as the “heckler’s veto” — is working. When universities accede to the demands of students who would resort to violence to shut down speech, this disincentivizes students inclined to respond to unpopular speech with better ideas and instead encourages them to respond in the most unproductive and inneffective way possible — with violence.

Other takeaways from this year’s survey include good news and bad news.

Support for the First Amendment as a concept is high. But First Amendment literacy is astoundingly low. For example, while a strong majority of Americans object to the government having the power to force social media companies to remove objectionable content, and also report being generally supportive of the rights the First Amendment protects, most people cannot name even one of those rights. As the Freedom Forum writes:

Encouragingly, the Freedom Forum Institute concludes “that even though most Americans can’t name all the freedoms guaranteed by the First Amendment, they have strong opinions about the specific First Amendment issues that pop up in their lives — in the news, on campus and online.”

Civil libertarians can use this opportunity to help improve civil liberties literacy of Americans who clearly care about these issues.

If you want to learn more about the First Amendment, check our FIRE’s one-of-a-kind First Amendment Library. And you can always find the latest campus civil liberties news on our website, thefire.org.