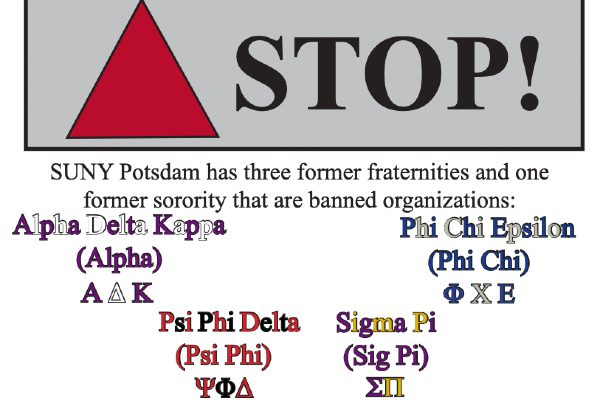 If you Google “banned organizations,” you’ll see links to lists of international terrorist groups, law enforcement lists of extremist groups, and then — a little further down but still on the first page — the State University of New York at Potsdam’s now-inaccessible list of groups its students may not join. This list doesn’t contain drug cartels or extremist militias, only an illustration of how this university blatantly violates the First Amendment rights of its students.

Although the list has since been deleted from its website, SUNY Potsdam also put this list on a flyer describing, in color-coded detail, its restrictions of its students’ First Amendment freedoms:


The flyer makes clear that SUNY Potsdam students face “potential suspension or expulsion” if they “pledge, join, accept membership, affiliate in any way, or seek to perpetuate” any of the 16 fraternities and sororities listed.

As a public university bound by the Constitution, with the freedom of association enshrined in the First Amendment, SUNY Potsdam may not maintain a list of “banned organizations” and punish students merely for affiliating with them. This is because the First Amendment “restricts the ability of the State to impose liability on an individual solely because of his association with another.”

The government can punish individuals for joining organizations, but only if those groups are shown to have engaged in unlawful activity and only if that person is shown to have joined that group with the intent to engage in that unlawful activity. Mere membership is not enough. This reflects the First Amendment “right of the individual to pick his own associates so as to express his preferences and dislikes, and to fashion his private life by joining such clubs and groups as he chooses,” and “associate with others in pursuit of a wide variety of political, social, economic, educational, religious, and cultural ends.”

For these 16 student organizations, even if SUNY Potsdam can prove these groups have engaged in unlawful activity, such as hazing, its ban on any form of affiliation raises the specter of guilt by association, which the U.S. Supreme Court has denounced as “alien to the traditions of a free society and the First Amendment itself.”

While the university may create rules for student groups that agree to affiliate with the school, groups that choose to fully dissociate from the institution remain on equal standing with other lawfully organized groups in the greater Potsdam community. As FIRE’s April 28 letter to SUNY Potsdam explains:

A university can no more prohibit association with a formerly-recognized fraternity than it can bar membership in the local Elks Club or bowling league. SUNY Potsdam must allow its students to exercise their First Amendment right to join these formerly affiliated groups, just as it would allow them to join any other organization unrecognized by and unaffiliated with the university.

The university responded later that day:

Thank you for your thoughtful analysis. The University continually undertakes review of its policies and procedures. We appreciate your inquiry and will be in touch in the event the University requests assistance from your organization.

The next day, the university prohibited this now-unaffiliated New York State nonprofit organization from:

SUNY Potsdam’s refusal to substantively engage with our First Amendment concerns raises troubling questions about the university’s power over unrecognized groups and the students who seek to join them.

For example, while SUNY Potsdam may punish student groups that break its rules, FIRE questions whether the university can ban off campus, unaffiliated organizations from functioning on their private properties or accepting new members merely because their membership includes SUNY Potsdam students.

Additionally, FIRE would like to hear the university’s justification for restricting students from “affiliat[ing] in any way” or “seek[ing] to perpetuate” the 16 “banned organizations” on its list. Since university policy broadly defines “affiliation” as “being involved in any activity that would normally be associated with being a member of such [an] organization,” FIRE wonders whether students will face discipline for wearing the letters, uttering mottos, displaying the sigils, or engaging in the various social activities of 16 different Greek organizations. We urge the university to clarify how these vague and ambiguous restrictions on expressive activity comport with its obligation to uphold students’ First Amendment rights.

Until then, FIRE calls upon SUNY Potsdam to abolish its “banned organizations” list, relinquish its overreaching restrictions on unaffiliated student organizations, and restore its students’ freedom to pursue membership in the groups of their choosing. Otherwise, SUNY Potsdam should add FIRE’s logo to its list to make clear that students vacate their rights upon enrolling at this university.