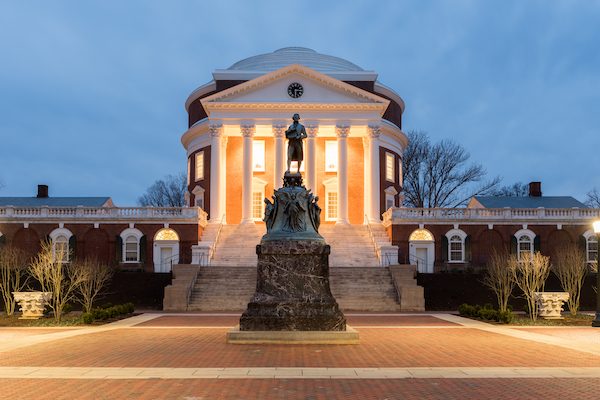 The University of Virginia is refusing to expunge the records of a former student punished for saying protesters “would have been speed bumps” had a road not been blocked.

As FIRE reported last month, it was July 2020 when former UVA student Morgan Bettinger found a road on her route home from work blocked by protesters and a garbage truck. She got out of her car and told the truck driver, “It’s a good thing that you are here because, otherwise, these people would have been speed bumps.”

This comment led to backlash from students attending the protest who overheard Bettinger’s comment. After receiving complaints and investigating the matter, UVA’s Office for Equal Opportunity and Civil Rights correctly found that Bettinger’s comment was not threatening and cleared her of charges.

However, the University Judiciary Committee — a student-run judiciary committee — also investigated the matter and determined that Bettinger’s comment was “shameful and put members of the community at risk.” The committee sanctioned her, required her to apologize, complete 50 hours of community service at an approved social justice organization, and participate in three hours of remedial education on police-community relations. Bettinger was blocked from graduating until she completed these sanctions. She completed the requirements and graduated in May.

Regardless of whether the student-led committee received accurate information about the law, it inaccurately applied it — and punished a student for constitutionally protected expression.

FIRE wrote to UVA on July 27, explaining that because Bettinger’s comment did not constitute a true threat or any other unprotected category of speech, she cannot be punished for it. FIRE called on UVA to right its wrong by expunging Bettinger’s record to prevent any further injustice from this unconstitutional punishment.

James Ryan, UVA’s president, responded to FIRE in an August 18 letter stating that the university would not expunge Bettinger’s record and that the UJC was given “legally accurate panel instructions regarding free speech, and it applied that correct standard to the evidence presented at Ms. Bettinger’s hearing.” Ryan further defended the UJC’s decision:

Ms. Bettinger received a fair hearing and review by both the UJC and the Judicial Review Board (“JRB”). I have no basis to find that the investigative or adjudicative process was infected with significant procedural errors that would warrant expungement. As President, it would be inappropriate for me to intervene in a case that has been properly adjudicated and reviewed by the UJC and JRB. Accordingly, I must deny your request to expunge the UJC’s findings and sanction.

UVA’s response is unacceptable. Regardless of whether the student-led committee received accurate information about the law, it inaccurately applied it — and punished a student for constitutionally protected expression. This violates both UVA’s constitutional obligations and commitments to free expression. This is immoral and illegal at a public institution like UVA.

As a public university, it is UVA’s responsibility to ensure that students’ First Amendment rights are not violated.

By accepting the UJC’s punishment of Bettinger, UVA has not only allowed a group of students to punish protected speech, UVA has endorsed that punishment. As a public university, it is UVA’s responsibility to ensure that students’ First Amendment rights are not violated.

While deference to the factual determinations of subordinate boards is an important function of appellate processes, the Judicial Review Board could reverse the finding of law (that the words amounted to a true threat) without disturbing the finding of fact (that Bettinger said the words at issue). As a result, the Judicial Review Board had the authority to overturn the imposition of sanctions on the basis that they were “unduly harsh, clearly excessive, or grossly inappropriate” because any punishment of protected expression is inappropriate.

We again call on UVA to expunge Bettinger’s record. Any other decision violates the university’s binding obligations under the First Amendment and signals to students that the university does not respect their rights.