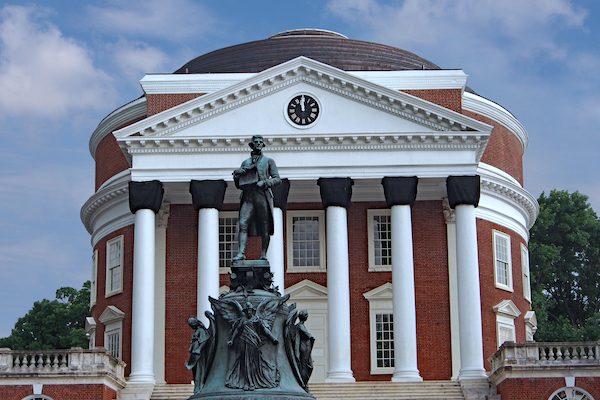 While driving home from work in July 2020, Morgan Bettinger, then a student at the University of Virginia, found the street blocked by protesters. A student-led committee later determined as a result of an investigation of the off-campus incident that Bettinger exited her car and told the driver of a city garbage truck, which was blocking the road, that “it’s a good thing that you are here because, otherwise, these people would have been speed bumps.”

That angered demonstrators who overheard her, and they followed Bettinger’s car as she slowly backed away. When a student later complained to the university’s Office for Equal Opportunity and Civil Rights, it found — correctly — that Bettinger’s comment “was not clearly threatening on its face,” and cleared Bettinger of charges.

That should have been the end of it: an insulting, inflammatory remark followed by an angry response from aggrieved demonstrators.

Instead, UVA brought charges against Bettinger through another avenue. A student-run committee, called the University Judiciary Committee, found that Bettinger’s statement comparing protesters to speed bumps was “shameful and put members of the community at risk” given Charlottesville’s “violent history” (referencing a counter-protester who was run over and murdered by a white nationalist at the 2017 “Unite the Right” rally). The UJC — which is “authorized to investigate and adjudicate alleged violations of the University’s Standards of Conduct” — found Bettinger responsible and imposed sanctions, including an apology, 50 hours of community service at an approved social justice organization, and three hours of remedial education on police-community relations.

How could a student-led committee punish a student for speech that the university determined was protected?

As a public university, UVA is bound by the First Amendment to respect the expressive rights of its students.

FIRE wrote to UVA yesterday to urge the university to expunge the UJC’s findings and sanctions from Bettinger’s record. We also called on the university to implement a policy to ensure that future students are not punished for protected expression by a university-sanctioned, student-run committee. As a public university, UVA is bound by the First Amendment to respect the expressive rights of its students. (The university also earns our highest, “green light” rating for its speech policies.) As we said in our letter:

While students may have been offended by Bettinger’s remark, it does not amount to an unprotected “true threat” and therefore remains protected by the First Amendment, which bars UVA—including its student conduct board—from punishing protected expression.

According to the Supreme Court, true threats — which are not protected speech — are limited to those statements through which “the speaker means to communicate a serious expression of an intent to commit an act of unlawful violence to a particular individual or group of individuals.” Bettinger’s comment, at worst, offered contempt for the protesters and served as a hyperbolic statement that the protesters should be subject to violence because of their conduct or views.

But, more importantly, as we explain in our letter:

[T]he remark was not a statement of intent to commit future violence, as evident from its use of the past tense (“would have been speed bumps”) and its conditional nature (“it’s a good thing that you are here because, otherwise. . . .”). As the United States Supreme Court explained in the seminal Watts v. United States, the “conditional nature” of a remark, where it is “a kind of very crude offensive method of stating a political” viewpoint, renders it “political hyperbole,” not a “true threat.”

The university itself effectively explained this when its equal opportunity office determined that a “reasonable person” would not view Bettinger’s comment, which was directed to the city garbage truck driver, to be “sufficiently severe to create a hostile environment,” as the “comment was not clearly threatening on its face.” Thus, Bettinger’s comment was neither harassment nor a threat.

We call on UVA to immediately right its wrong and recommit to its obligations under the First Amendment.

This is not the first time that UVA has incorrectly labeled a student’s political speech as unprotected. Earlier this year, UVA’s housing authorities forced a student to remove a sign from her door that the university labeled “incitement.” The sign — which read “Burn It All Down” and “‘In order for non-violence to work your opponent must have a conscience’ UVA has none!” in all capital letters — was political rhetoric, not unprotected incitement. In that instance, too, UVA invoked the “context” of Charlottesvile’s violence, recounting the “white supremacists [who] marched on the Rotunda with flaming torches.”

To prevent any further adverse effects from the university’s unconstitutional decision, UVA must remove the UJC’s conviction and sanctions from Bettinger’s record. UVA must also implement policies and procedures to prevent any future students from being punished by the UJC — which acts with the permission and the authority of the university — for constitutionally protected expression.

We call on UVA to immediately right its wrong and recommit to its obligations under the First Amendment.