WICHITA, Kan., Sept. 14, 2017 — Administrators at Wichita State University have reversed course after launching a Title IX investigation into a fraternity for hanging a banner outside their fraternity house that read “New Members Free House Tours!” An administrator initially justified the investigation, saying, “I think we’re all a little more sensitive because of the statements Betsy DeVos made” about Title IX enforcement the previous week. 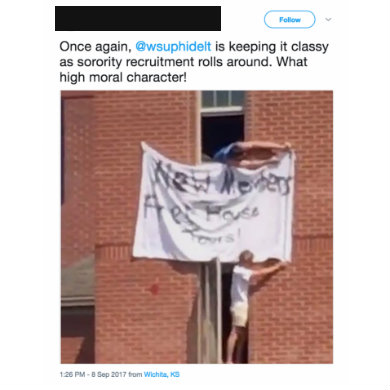 The Foundation for Individual Rights in Education wrote a letter to Wichita State President John Bardo on Tuesday to demand that the university drop the investigation, arguing that it “sends a message to all students that if their expression offends others, they will be subjected to disciplinary investigation.” On Wednesday, the university affirmed the expression was protected by the First Amendment and dropped its investigation.

The banner hung outside the Phi Delta Theta fraternity house for approximately five minutes on Sept. 8, facing a neighboring sorority recruitment event. Fraternity members quickly took the banner down and issued an apology.

“FIRE is pleased that Wichita State quickly recognized that the banner was constitutionally protected and dropped the investigation,” said Ari Cohn, director of FIRE’s Individual Rights Defense Program. “While universities have an obligation to respond to complaints, administrators must be careful to first evaluate the complaint and determine whether an investigation is necessary in light of First Amendment protections.”

A student reported the banner to the Division of Student Affairs, which announced on Twitter the following day that the banner was “sent on for further investigation.” Vice President for Student Affairs Teri Hall said the investigation was motivated in part by recent announcements from Secretary of Education Betsy DeVos.

In a Sept. 7 speech, DeVos criticized the federal government’s overbroad and unconstitutional definition of sexual harassment under Title IX, the law against sex discrimination in federally funded education programs. The definition has led to a wave of administrative overreaction to constitutionally protected speech, including a professor who was punished after a 504-day investigation for a test question about waxing and another who was the subject of a Title IX investigation for an essay she wrote suggesting there are too many Title IX investigations.

“Through intimidation and coercion, the failed system has clearly pushed schools to overreach,” DeVos said in her speech.

On Wednesday, Hall announced that although the banner “triggered uncomfortable feelings,” it was protected speech under the First Amendment and that the university would drop its investigation. Banners like this appear at universities nationwide, and although they’re not universally appreciated, they’re usually constitutionally protected.

On Monday, the student newspaper reported that Hall called the banner “absolutely inappropriate” and added that “we’re all a little more sensitive because of the statements Betsy DeVos made.” In its letter, FIRE reminded the university that “such subjective heightened sensitivity is not a license to violate established law.”

This is FIRE’s second victory at Wichita State this year. FIRE wrote to Bardo in April after the Student Government Association denied recognition to Young Americans for Liberty, a libertarian student group, because of the group’s belief in First Amendment principles. The decision was overturned by the Supreme Court of the Wichita State University Student Government after receiving FIRE’s letter, which explained that the students cannot engage in viewpoint-based discrimination against prospective student groups.