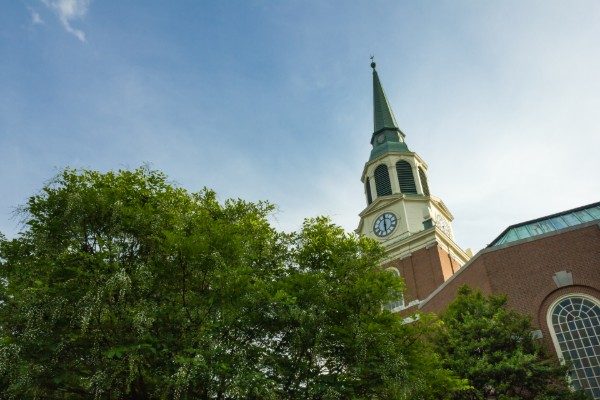 Wake Forest University’s leaders don’t think an investigation to uncover the identity of a parody’s author creates a chilling effect on future speakers. They are wrong, and their actions undermine the promise of free expression the university makes to its students.

You may remember that, in March, FIRE wrote to Wake Forest in Winston-Salem, North Carolina, explaining that its threat to investigate an anonymous Instagram post that parodied a student government campaign ad would chill freedom of speech on campus. The parody proposed building a wall between Wake Forest and its cross-town neighbor, Winston-Salem State University.

At the time, Wake Forest President Nathan O. Hatch tweeted that the post was “deeply offensive and unacceptable,” presumably because Winston-Salem State is a historically black institution. In our letter, we explained that investigating a post that offended some people, but that was not unlawful, undermined Wake Forest’s promises of free expression.

It gets worse: In a statement, Hatch went on to say that the statement’s “impact on the community is widespread and harmful, regardless of the original intent.” So at Wake Forest, what you meant to say is irrelevant. If people don’t like it, or if they simply misunderstood it, the speech police are going to be looking for you. Would Hatch, or any other Wake Forest administrator, appreciate similar treatment, should they ever say something that others misunderstand? To ask that question is to answer it — but there’s nobody to hold them accountable.

FIRE specifically raised the problem of the chilling effect created by the investigation into what was, under the First Amendment and any reasonable reading of Wake Forest’s policies, protected speech. As we explained earlier:

If this Instagram post is indeed pure satirical speech, and Wake Forest’s Bias Response Team is investigating it, it suggests one of two things is true:

One, the team believes it can punish pure protected speech, in which case, it’s violating Wake Forest’s promises and undermining a key goal of higher education.

Or, alternatively, the team knows it can’t punish pure protected speech, in which case, it’s wasting everyone’s money and time in what amounts to a form of administrative theater that still chills free expression, because people won’t want to deal with the hassle of dealing with grown-ups being play-time inquisitors every time someone doesn’t like their jokes.

This is one of the rare instances where the choice is genuinely as binary as it sounds. Choosing to investigate something that is within the guarantee of free expression Wake Forest makes to its students is a violation of that promise and discourages future speech. Investigations are time-consuming, sometimes lead to incorrect enforcement, and in the case of anonymous speech, undermine a key element of the speaker’s goals.

On April 17, Wake Forest wrote back with the following:

Like FIRE, Wake Forest University is committed to providing students the right to free expression and to openly dissent. The University’s response to the Instagram post reference in your letter is not in conflict with that commitment.

This response is totally bogus. That investigations into protected speech create a chilling effect is not in doubt and is well documented. Wake Forest may say what it likes, but decades of jurisprudence on the limits of free expression say otherwise.

Faced with the threat of these kinds of investigations, students must now weigh their speech against the likelihood of institutional persecution. In many cases, they will choose to walk away rather than risk being hunted down and, at the very least, summoned to a series of meetings where they’ll be tasked with convincing administrators not to further violate their own promises of free expression.

Although it is not the primary reason such investigations are bad, it is also worth noting that it is a total waste of time and money to conduct investigations into speech that the school policies already say can’t be punished. This squanders school resources that could otherwise be devoted to, say, education, or investigating actual wrongdoing. Investigations into protected speech are fishing expeditions in lakes that have no fish. Those who engage in such activity are lacking in wisdom, sincerity, or both.

That Wake Forest doesn’t see a conflict between promising free expression to students and investigating a student who engages in free expression indicates that its promises of free expression are based on nothing whatsoever. Ordinarily, a promise of free speech is backed by an appreciation for the cause of liberty and the value of academic freedom, but there are, in rare cases, places that manage not to recognize the relationship between the two.

How about an example? Here are four free speech promises from foundational documents:

One of those is from Wake Forest’s Statement on Expression. The other three are from the constitutions of Russia, Turkey, and North Korea. Which is which? It doesn’t matter, because not a single one of them is actually worth a damn, in practice.

The point isn’t that Wake Forest is indistinguishable from North Korea. There’s obviously a lot of daylight between “investigates protected speech” and “maintains prison gulags.” The point is that, where an institution isn’t bound by the First Amendment, a promise of freedom means very little without an institutional commitment to act consistently with that freedom. Wake Forest has chosen not to do so, in this instance, and that undermines any faith a student could have had in Wake Forest’s promise of free speech (which, for the record, is #3 in the list, with North Korea, Turkey, and Russia at #1, #2, and #4 respectively).

Presumably, future speakers on the Wake Forest campus will factor this response into their decisions, with more of them choosing to be anonymous, given Wake Forest’s lack of commitment to free expression.

How many speakers, then, do you suppose might be driven underground?

How many will say nice things about Wake Forest when the university is listening, then air their honest grievances in private or anonymously — especially online, where the world can see them?

In a state like North Carolina, which boasts no less than 11 “green light” institutions — more than any other state in the country — Wake Forest’s policies earn it a yellow light, and it acts like a red light. Here’s hoping future Demon Deacons know how they’ll be treated in return for their (holy smokes!) seventy-five thousand bucks a year.