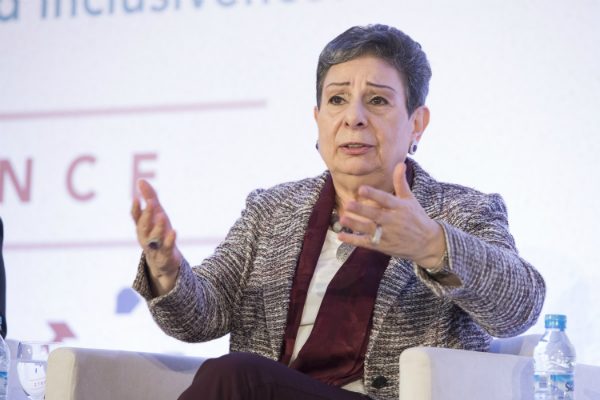 Just last month, FIRE raised concerns about the possibility that the United States’ visa denial to Palestinian activist Omar Barghouti, co-founder of the Boycott, Divestment, and Sanctions movement, was viewpoint-motivated. Prior to his denial, Barghouti had been scheduled to speak at college campuses including Harvard University and New York University.

Another visa denial — this time for Palestinian politician and negotiator Hanan Ashrawi — is raising similar concerns. Ashrawi is the former Minister of Higher Education and Scientific Research for the Palestinian Authority and a member of the Palestinian National Council and executive committee of the Palestinian Liberation Organization, among other roles. CNN reports:

A State Department spokesperson would not confirm or deny that Ashrawi’s visa had been rejected, saying “visa records are confidential under US law; therefore, we cannot discuss the details of individual visa cases.”

Ashrawi wrote on Twitter that “no reason” was given for the visa application rejection, and added that she’s been a “frequent visitor” to the United States and has “met (& even negotiated with) every Sec. of State since Shultz, & every President since George H. W. Bush (present administration excluded).”

1/It is official! My US visa application has been rejected. No reason given. Choose any of the following: I’m over 70 & a grandmother; I’ve been an activist for Palestine since the late 1960’s; I’ve always been an ardent supporter of nonviolent resistance;

On Wednesday, the Middle East Studies Association of North America sent a letter to Secretary of State Michael Pompeo about the State Department’s denial of a visa for Ashrawi, writing:

We are concerned that the denial of a visa to Dr. Ashrawi is intended to limit the range of political perspectives to which Americans have access and thus constitutes an officially sanctioned act of political censorship as well as a dangerous violation of Americans’ First Amendment rights. Given that Dr. Ashrawi had been invited to speak on college campuses on this visit, it also threatens the principles of academic freedom.

As we wrote last month in regards to Barghouti— who, like Ashrawi, was denied a visa prior to a campus speech — universities should not limit their communities’ access to controversial ideas and “[t]hat principle becomes no less true if the U.S. government, rather than administrators, is effectively determining which speakers cannot be invited to U.S. campuses.”

But the question about what immigration authorities can do, rather than what they should do, is more complex:

The Supreme Court, however, has previously authorized immigration authorities to bar, due to ideological objections, would-be foreign speakers from visiting the United States for the purpose of speaking on its campuses. In Kleindienst v. Mandel, the Supreme Court weighed whether the State Department’s rejection of Ernest Mandel, a Marxist economist and activist who had been invited to speak at Stanford, Princeton, Columbia, and other universities in 1969, violated the First Amendment rights of those who wished to engage with Mandel’s views. The Supreme Court reversed the district court’s ruling that American citizens have a First Amendment right to hear and respond to Mandel’s views, writing that “[w]hat First Amendment or other grounds may be available for attacking exercise of discretion for which no justification whatsoever is advanced is a question we neither address nor decide in this case.”

In Justice Thurgood Marshall’s dissent, joined by Justice William Brennan, he wrote that he was “stunned to learn that a country with our proud heritage has refused Dr. Mandel temporary admission” and that he was “convinced that Americans cannot be denied the opportunity to hear Dr. Mandel’s views in person because their Government disapproves of his ideas.”

Even if immigration authorities can bar Barghouti’s entry without infringing on the First Amendment, that does not immunize their decision to do so from criticism.

(For a more thorough explanation of this issue, read our full post on Barghouti’s visa denial.)

The principles remain the same in Ashrawi’s case. If she has been denied a visa — and the students hoping to hear her speak have been denied the opportunity to do so — on the basis of her pro-Palestine advocacy, this represents a departure from our nation’s commitment to freedom of expression, and a threat to students’ and faculty members’ ability to invite speakers who express unpopular views.