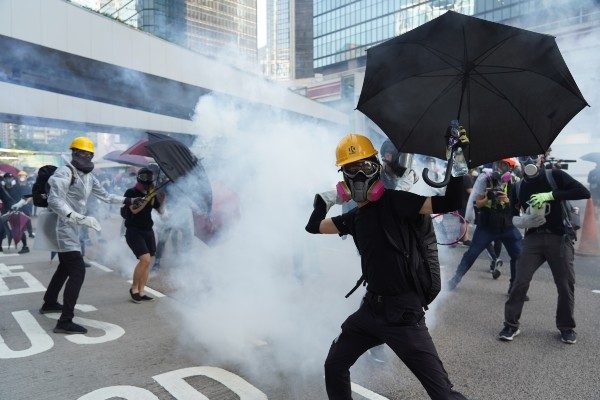 The mass protests that have swept Hong Kong in recent months are unlikely to cease anytime soon. What is likely, though, is that this movement will continue to spread protests of both support and opposition at campuses around the world.

Are American universities prepared for the free speech challenges posed by the often passionate student disagreement about Hong Kong?

Art controversy at the University of Missouri-Kansas City

As FIRE can attest, universities are no strangers to art controversies — last summer we released a report chronicling nearly two decades of campus art censorship. So it was no surprise when UMKC found itself at the center of arguments last month over a student’s pro-Hong Kong democracy artwork that in part reimagined the Chinese flag as a swastika with #CHINAZI written on it.

The work, which was created for a class assignment and hung in UMKC’s Fine Arts Building, quickly prompted complaints from students who found it offensive. Students contacted the professor who chose to display the work and the Department of Art and Art History chair Elijah Gowin to complain.

They wrote that “many students have felt a sense of racism” and that the artwork was “derogatory … Not only the swastika symbol, but the hashtag #CHINAZI also showed the extremely disrespectful attitude towards the country.” They also added that “hate speech of any kind is not free speech.” (Hate speech, of course, is not a recognized exception to the First Amendment, a core purpose of which is to protect the right to controversial political speech.)

On Nov. 15, Gowin told The Kansas City Star that the piece had not been removed, but “The Star later learned that the challenged piece had been removed and a different art display put in its place.”

According to a UMKC statement, “[t]he removal was in no way a response to complaints about the work’s content,” and that the piece had already been set for removal on Nov. 14 at the end of a standard three-week display cycle.

The university also noted, “UMKC is committed to the First Amendment and the right of free expression that it guarantees. As a public university, we do not censor political commentary based on the viewpoints expressed. We also are willing to listen to opposing viewpoints and provide opportunities for those to be heard as well.”

UMKC’s statement — assuming its innocuous explanation for the work’s removal is truthful — is correct. Public universities cannot censor student expression simply because it causes controversy among students. When asked to censor students, whether it’s because of opposition to or support of the protests in Hong Kong, universities must make clear that their role is to protect their students’ right to debate, not limit it.

Censorship and vandalism at numerous campuses

At some campuses, students have taken it upon themselves to eliminate commentary about Hong Kong.

University of California, Davis student group Davis4HK, which advocates for democracy in Hong Kong, has experienced multiple encounters that resulted in destruction of their property. In October, one Davis4HK member’s phone was thrown on the ground, resulting in a cracked screen, by a student he filmed arguing with the group.

Days before that, students had approached their table and ripped up letters they had used to gather petitions for the Hong Kong Democracy and Human Rights Act. In another incident, a student ripped down the group’s pro-democracy flag and bent the pole in half. The incident, captured on video, showed the student yelling “This is rubbish!” and “Hong Kong is a part of China!” after destroying the flag.

Last month, students at both North Carolina State University and the University of Rochester reported that their murals expressing support for Hong Kong were defaced and destroyed. One UR student wrote in an op-ed:

[T]he University campus highlights commitment to protecting the freedom of opinion, a commitment to creating an environment where everyone belongs and can partake in the enriching experience of learning. [ . . . ]

Messages that were labors of love were painted over with crude caricatures. “Free Hong Kong” became “I love Pandas,” “Free Palestine” became a solid block of paint, “Stay Safe” became a wall of black, and “Free Uyghur” became “I love China. I’m from Xinjiang.” A Hong Kong avatar wearing a hard hat became a racist caricature of an Uighur Muslim wearing traditional headgear.

Using one’s freedom of expression to silence and erase the voices of others is immoral.

The editorial board of UR’s campus newspaper, Campus Times, remarked on the dispute as well, writing: “We go to a university, an institution for learning. To learn, we must challenge our perspectives by exploring those different than our own. To obscure an opposing view by painting over it rejects such exploration.” Members of the UR Students’ Association Senate also debated whether the painted tunnel’s policies should better preserve students’ messages against immediate destruction.

FIRE will continue to watch the debate at UR for further developments.

Hong Kong is not the only topic that provokes fierce debate about China. Northwestern University issued a statement last month after it posted, and chose not to take down, a photo on its Instagram account for International Education Week’s “March of Flags” in which a student could be seen holding a flag with the message “I SUPPORT TAIWAN INDEPENDENCE” in English and Chinese.

The post attracted thousands of comments ranging from demands that Northwestern remove the photo to praise of its decision not to do so.

We support and encourage free expression and free speech on campus and the sometimes uncomfortable debates that such speech inspires. Universities are a place for rigorous debate and discussion of difficult topics, and this is one of those times.

We did not intend to make a political statement by posting this photo. The March of Flags event was intended to bring people together and show the amazing international diversity of our campus. We would have preferred that no political statements be made on that occasion and we acknowledge that some members of our community were offended. Having said that, we support our students’ right to free expression and have left the photo in place.

Northwestern’s decision to lament a student’s flag showing a “political statement” in a photo meant to feature flags is a bit puzzling. After all, the act of waving any country’s flag is arguably a political statement in itself, albeit a more commonly accepted one.

Ultimately, though, it’s reassuring to see Northwestern use this controversy to emphasize the importance of freedom of expression. When presented with opportunities to reaffirm their institutional commitments to free speech, universities should do so.

What else can be done?

While administrators may be potentially less well-versed in the disagreements over China, Hong Kong, and Taiwan than other political disputes that are common on campuses, their responses do not need to differ.

When a demand for censorship or an act of censorship has occurred, universities should remind their community members that they will protect the rights of all students to speak freely, regardless of where they stand on China, Hong Kong, or other political matters.

They must also reiterate that administrative censorship will not be used as a cudgel to settle students’ political disputes.