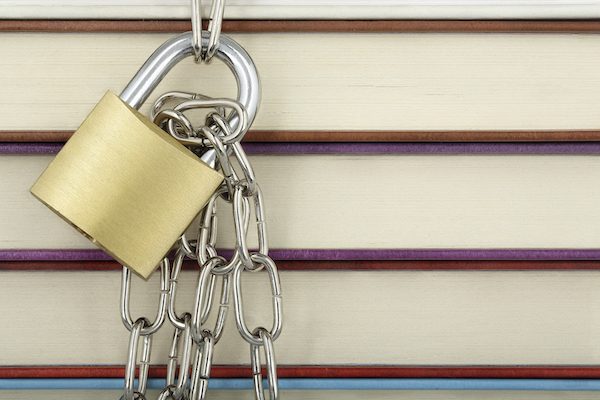 Today marks the start of Banned Books Week. This annual celebration of the right to read serves as an opportunity to reflect on the impact of censorship and start conversations about preserving academic freedom and sparking intellectual curiosity.

Before any of those conversations can start, though, there is always the same question:

The answer this year, and every year, is yes.

Across the country students and faculty are pushing back against book bans and calls to limit their right to study or assign works that some may find controversial.

However, beyond these “traditional” acts of censorship is another trend worth highlighting: the proliferation of the idea that words and books can constitute violence.

While FIRE has and will continue to defend the rights of even those that call for censorship or make arguments equating speech with violence, it’s important to break down the illiberal nature of calling any works with which you disagree an act of “violence.”

Earlier this month, FIRE President and CEO Greg Lukianoff and former ACLU President Nadine Strossen published a piece addressing this argument after it was posed by a guest on the WNYC podcast On the Media.

Hey @onthemedia! #Freespeech does not equal violence: Part 1 of answers to bad arguments against free speech from the great NADINE STROSSEN https://t.co/HyeMJAQe1G via @TheFIREorg

While acknowledging that speech can cause psychological harm and that speech meeting narrowly defined categories such as “true threats,” “fighting words,” or “incitement” can be regulated, Strossen said:

Physical violence directly and inevitably causes at least some physical harm, as well as associated psychic harm. Words may indeed have the same harmful potential. Unlike physical violence, though, speech can influence listeners only through their intermediating perceptions, reactions, and actions, and only as one of countless other factors that also have potential influence.

Greg responded that equating speech with violence, while it may seem novel, is actually “a very old — and very bad — idea.”

When we blur the line between speech and violence, it implies that violence can be an appropriate response to speech. That’s a recipe for disaster in public debate, civic life, and college campuses. Just last week, FIRE and College Pulse released a report surveying student attitudes towards free expression at over 150 colleges and universities. One of the most striking takeaways was that 23% of college students consider it acceptable for people to use violence to stop certain speech they disagree with.

This statistic — up 5% from last year — should be alarming to anyone, regardless of political affiliation. The more we as citizens respond to speech with violence, the more our government and others in power can justify the use of the same force to stop speech they may disagree with or that is controversial.

In the higher ed context, FIRE has seen this occur in the form of “security fee” cases where universities request large amounts of funding from student groups to pay for extra security around events that have the potential to upset listeners or protestors. While imposing fees on speech because of the potential reaction of others is antithetical to First Amendment rights, it still occurs, and the idea that speech is violence perpetuates universities’ justification for such fees.

While such a scheme might seem good if you agree with those in power, there is no promise that the next round of leaders will be on your side and wield that power in your favor. Once the door to that kind of censorship is open, it is hard to close.

The same can be said for using violence to that end.

One of the most accepted definitions of a “state” comes from ​​sociologist Max Weber. He noted in his 1918 lecture “Politics as a Vocation” that a state can be defined when a government or leader successfully “claims the monopoly of the legitimate use of physical force.” Basically, a government is the only institution that can use violence without official retribution.

Speech is not something the government should have a monopoly over. Particularly in the United States, where the Constitution enshrines that principle.

This does not stop individuals from committing acts of violence, but the government has the power to decide which acts are allowed and to what extent unauthorized acts can be punished.

Especially in an era where the role of the police and the state’s use of violence is the subject of intense debate, placing speech in the same category as violence could empower even more censorship of protests and speakers on any side of a conflict.

Speech is not something the government should have a monopoly over. Particularly in the United States, where the Constitution enshrines that principle.

While the psychological harm speech can cause is something to be taken seriously, it should be addressed with more speech, not enforced silence. This year, we at FIRE are celebrating Banned Books Week by defending the right to read and encouraging discussion about the potential impact censorial speech has on our First Amendment freedoms.