By now you may have heard about the objections to the University of California, San Diego’s decision to invite the Dalai Lama as a commencement speaker.

The Dalai Lama, a Tibetan spiritual leader, has long been opposed by the Chinese government for his advocacy of self-rule in Tibet, which China views as an attack on its sovereignty. This view is apparently shared by some UC San Diego students, who took to social media to express anger at the invitation: 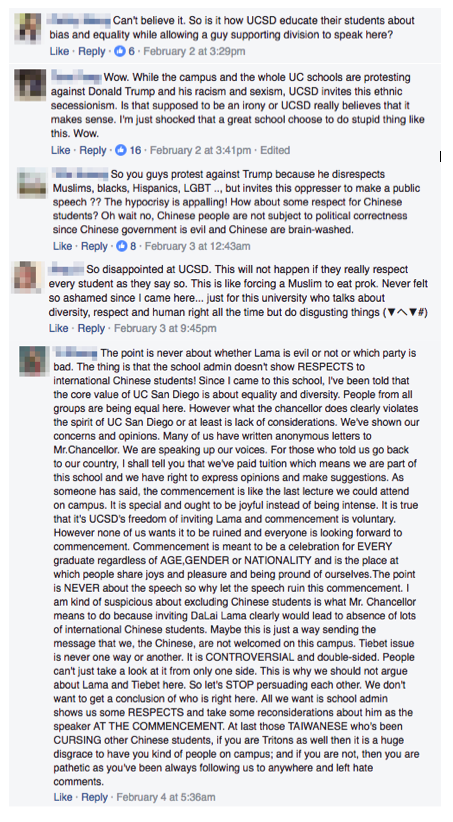 A number of comments suggested that the university betrayed its commitments to diversity and respect by inviting a speaker whose views could be seen as abhorrent by students opposed to the Dalai Lama’s political stances.

While the use of this specific type of language to demand speaker disinvitations is not uncommon, another factor here — the involvement of the Chinese consulate of Los Angeles — certainly was. According to Inside Higher Ed:

“In a statement it posted on WeChat, the Chinese Students and Scholars Association at UCSD said it contacted the Chinese consulate in Los Angeles for guidance and engaged in negotiations with ‘relevant departments’ at the university.

‘The Dalai Lama is not only a religious personality but also a political exile who has long been carrying out actions to divide the motherland and to destroy national unity,’ the group said in the statement, translated from Chinese by Inside Higher Ed. The group went on to say it would be ‘firm in boycotting any action taking any form, with unclear motives, that denigrate and belittle Chinese history, that recklessly disseminate provocative and extremely politically hostile discourse, in turn affecting the international image of China.’

The statement says ‘the various actions of the university have doubtlessly violated respect, accommodation, equality and earnestness — the founding spirit of the university. Moreover, these actions have dampened the passion for learning in many Chinese students and scholars.’”

According to Quartz, a student and Chinese Students and Scholars Association member reported that the university’s chancellor scheduled a meeting with the association to discuss the invitation. The student said that the association would not ask for the Dalai Lama’s disinvitation, but would request that the chancellor “make sure his speech has nothing to do with politics.” 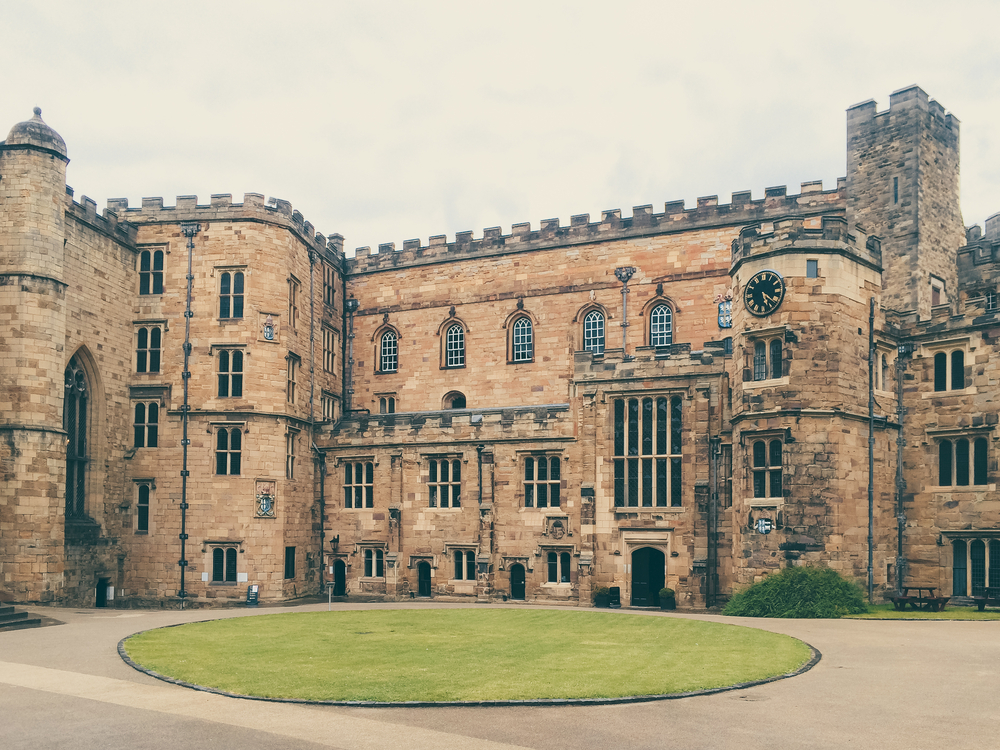 A similar event occurred earlier this month at the United Kingdom’s Durham University when its debate group, Durham Union Society, invited former Miss World Canada Anastasia Lin, who was born in China but later refused a visa, presumably because of her human rights advocacy. Buzzfeed reports that the Chinese Embassy in London called the Durham Union Society warning the students to reconsider Lin’s invitation:

“‘For Lin coming here we put [sic] some serious concerns about this debate,” the official told the students on the telephone call, warning it could affect UK–China relations.

‘Especially after the UK leaves the European Union, the prime minister has visited China and reconfirmed that China and the UK are seeking globally strategic collaborations. We don’t think that this kind of debating would make any contribution to these kind of relationship.

‘So we thought that we would just let you know that. Take a second and think between this debating and the more grand background of UK–China relations.’

The diplomatic official said Chinese students at Durham had raised concerns about the event with the embassy, which then decided to intervene.

‘The Chinese students are not comfortable about Lin because she’s not friendly to the Chinese government,’ the official said.”

For its part, UC San Diego is standing by the invitation, according to Inside Higher Ed:

“‘The University of California, San Diego, has always served as a forum for discussion and interaction on important public policy issues and respects the rights of individuals to agree or disagree as we consider issues of our complex world,’ the university said. ‘Our 2017 speaker, His Holiness the 14th Dalai Lama, carries a message that promotes global responsibility and service to humanity that is of great interest to the UC San Diego community and to our students as they enter their professional lives. As a public university dedicated to the civil exchange of views, the university believes commencement is one of many events that provide an appropriate opportunity to present to graduates and their families a message of reflection and compassion.’”

Student demands for speakers’ disinvitation or silencing is not a new phenomenon, and it’s one FIRE has raised concerns about for years and explored in-depth in a 2014 survey. (We also track these demands in our Disinvitation Database.)

While we have consistently stated that students are welcome to use their free speech rights to protest — or even demand disinvitations of any speaker — we have also argued that demanding that speakers be disinvited or have their speech limited is an illiberal tactic that is “dangerous not only for the practice of critical-thinking skills but also for our democratic society.”

While opposition to speakers’ invitations is quite common, few incidents like those at UC San Diego and Durham so starkly convey the illiberal nature underlying demands for a university to cancel or limit a speech because of opposition to the speakers’ views.

When considering any tactic — like calls for the disinvitation or silencing of invited speakers — one should ask themselves the question, “Would I still be comfortable with this tactic if it were adopted by people in positions of immense power, like government officials?” It rings true in this case, and is a reminder that we should not so quickly offer support and lend legitimacy to methods that authoritarians anywhere could easily adopt to justify quelling their critics in academic settings around the world.