FIRE > Newsdesk > Top Story > From Berkeley to Haverford: Have we forgotten the progressive history of free speech on college campuses? 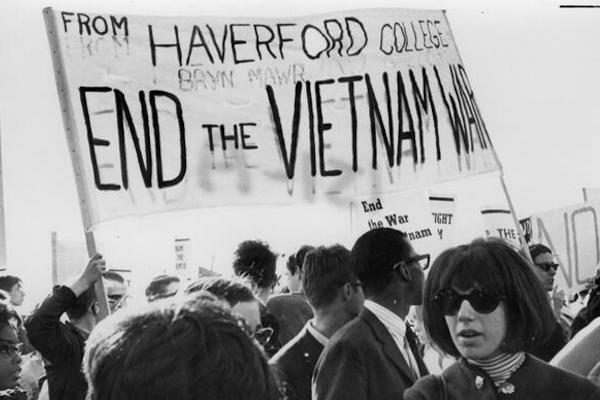 In the 1960s, students at the University of California, Berkeley formed the storied Free Speech Movement to counter “the old-school ideas of paternalistic university supervision” that prevented them from fully participating in Vietnam War protests and the civil rights movement. Their civil liberties victories helped catalyze new waves of political expression on college campuses across the country, with the effects reverberating for decades afterward.

Haverford College, where I am a student, played a role in this history. Students, faculty, and administrators at the historic Quaker school were deeply involved in the era’s social justice movements. In May 1964, Haverford students traveled to New York City to protest United States involvement in the war in South Vietnam, forming the core of a 400-student rally and march. In May 1970, on the heels of the Kent State massacre, Haverford President Jack Coleman “bused nearly 700 students, teachers, board members and alumni to Washington to protest the American bombing campaign in Cambodia.”

At the time, the Haverford community saw the exercise of free speech as crucial not only to the nation’s progress, but also to a Haverford education — befitting of the school’s motto: “Not more learned, but steeped in a higher learning.” 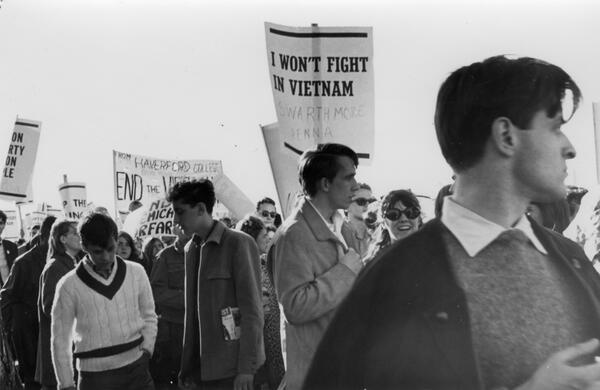 In the 1960s and ‘70s, it was clear to students at schools like UC Berkeley and Haverford that free speech was indispensable to achieving progress on the most pressing issues of the day. The idea that civil liberties and civil rights were co-dependent seemed obvious, given the recent history of free speech at the time. In the 1910s and ‘20s, free speech formed the cornerstone of women’s suffrage, while in the 1950s and ‘60s, it was essential to the strategy of gay rights advocates like Frank Kameny.

Today, however, free speech is often considered a “conservative talking point,” and students at schools that once championed free speech now view civil liberties and civil rights as conflicting priorities. In recent years at Berkeley, students have shut down controversial speakers, while at Haverford, a recently adopted amendment to the Honor Code subjects students’ political speech to what is referred to as “Social Trial” before the student-led Honor Council.

Many on the left, where I stand politically, assume that free speech — although it has a nice history — only benefits conservatives these days. Some of my peers think of speech as a “tool of the powerful, not the powerless.” Yet students and administrators who advance the dissonant notion that speech restrictions go hand-in-hand with social justice would be well-served to familiarize themselves with those who are often the primary targets of censorship: dissidents and government critics alongside racial, ethnic, religious, and sexual minorities.

It is a mistake to understand the current free speech crisis as one in which the left triumphs while conservatives are silenced: Some of the worst offenders are conservative universities and states that crack down on left-wing speech. Nobody has anything to gain by curbing freedom of thought and expression. We do not have to choose between justice and freedom; we must have both.

Last year, when FIRE wrote to Haverford and pointed out that the proposed Honor Code amendment could silence both Palestinian activists and Zionists, our president approved the new speech code anyway, ironically promising to “ensure that normative expectations do not chill the thoughtful expression of ideas or beliefs” on campus.

Given Haverford’s proud free speech history and strong formal commitment to freedom of expression in its Faculty Handbook, the school should have rejected last year’s Honor Code amendment.

Confronted by critics who argue that the language found in speech codes is broad enough to sanction social justice movements, college administrators across the country are quick to promise that they will not enforce their speech codes in such a manner. Despite such assurances, last school year students and faculty nationwide were censored for affiliating with the Black Lives Matter movement; investigated for including provocative black and queer authors on their syllabi; and punished for protesting human rights abuses by the Chinese government — all of which is political speech that would be protected under First Amendment standards, and much of which is progressive. While some of these incidents occurred at private institutions, which are not bound by the First Amendment, such schools often promise free speech protections to their faculty and students, making them morally — if not contractually — bound to honor those promises.

Though Haverford is a private institution, its policy on Expressive Freedom and Responsibility recognizes “the right of all students to engage in discussion, to exchange thought and opinion, and to speak or write freely on any subject.” Given Haverford’s proud free speech history and strong formal commitment to freedom of expression in its Faculty Handbook, the school should have rejected last year’s Honor Code amendment, which even our president admitted might cause “a reasonable person” to “worry about whether they are free to share their views, whether a political affiliation, a stance on public policy, or a religious value at odds with others” on campus.

There is a Quaker saying that offers some applicable wisdom: “Let your life speak.”

Even if administrators stick to their word and don’t allow speech codes to be enforced in ways that stifle political discourse, such practices are temporary and subject to change. When the Free Speech Movement at Berkeley began, it was out of anger over the enforcement of a speech code that administrators had chosen not to enforce in years prior.

Berkeley’s practice of turning a blind eye to political expression on campus changed when outside pressure (largely from the state legislature) forced administrators to take action.

Sound familiar? The current moment couldn’t be more similar. As former ACLU director Ira Glasser explained, “Speech restrictions are like poison gas. It seems like it’s a great weapon to have when you’ve got the poison gas in your hands . . . but the wind has a way of shifting . . . and suddenly that poison gas is being blown back on you.”

So, in pursuit of social progress, what are “kindly inquisitors” at schools like Haverford to do, if not police expression by banning certain acts of political speech?

There is a Quaker saying that offers some applicable wisdom: “Let your life speak.”

Those who believe themselves to be on the right side of history should lead by example rather than deprive their opposition of fundamental civil liberties. Frederick Douglass once called free speech “the great moral renovator of society and government.” It is up to us to keep the conversation going if we hope to improve our communities and our country.

Forcing those who don’t hold progressive views into silence will not bring lasting change. Sincere shifts in social attitudes are the only ones that count. If you force someone to adopt the “one true opinion,” all you will breed is resentment and backlash — not enlightenment. True progress has always been made and always will be made through open discussion, collective exploration, and careful deliberation — not the cudgel of imposed thought, compelled speech, and heavy-handed censorship.

Six decades have passed and the lessons of the 1960s often lie forgotten. Wavering at the first criticism, our leaders pay nothing more than lip service to the values the First Amendment enshrines. Those of us who care about changing societal attitudes for the better must remember what got us here: Faith in free speech and free thought. Freedom of speech is an eternally radical idea, and it is not too late to recommit ourselves to its principles. In fact, our future as free people depends on it. The zealous free speech radicalism of the sixties must return. It’s time to change course.

William Harris is a rising junior at Haverford College and a FIRE Summer Intern.