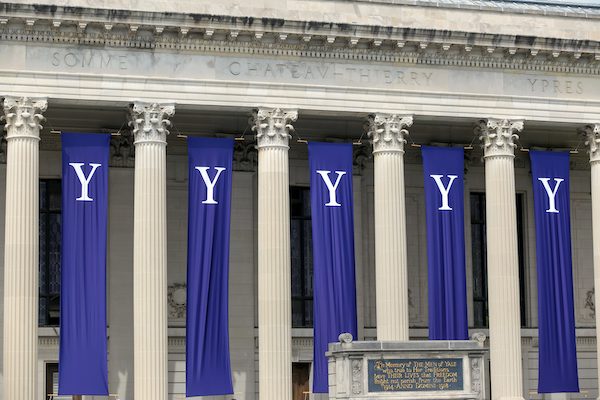 Much ink has been spilled over the Mar. 10 Yale Law School Federalist Society event on civil liberties that — depending on which article you read — either went off mostly unhindered, or suffered severe disruptions. FIRE’s investigation, based on new audio recordings of the complete event, confirms that protesters substantially disrupted the discussion and that Yale ignored its own policies by doing next to nothing to stop the disruption.

What proceeded next has been a matter of intense debate. Now, unredacted audio recordings acquired by FIRE dispel the confusion created by conflicting accounts of the event and show how protesters did everything they could to prevent the audience from hearing the speakers.

Protesters banged on walls, stomped on the ground, chanted “Fuck you FedSoc,” and screamed at the panelists, creating so much noise that classes and events in the same building were disrupted. The cacophony persisted for the majority of the event, and though panelists struggled to project their voices over the noise, the audience remained largely unable to hear them.

And what did Yale’s administration do to stop this? Nothing.

Deans, administrators, even the Yale police officers stationed at the event refused to lift a finger to address the noise. This, despite Yale’s policies guaranteeing students robust free speech rights consistent with the First Amendment, banning disruptions of expressive events, and requiring administrators to remove disruptive attendees if they fail to heed university warnings. Yet, Yale Police Department Assistant Chief Anthony Campbell admitted that officers were there “not to enforce YLS policy but rather to protect the safety of the demonstrators and those they were protesting.”

In a Mar. 28 email regarding the event, Yale Law Dean Heather Gerken lamented in an email to the law school community that “some [protesters] refused to listen to our staff,” but incredibly asserted that “students complied with University policies inside the event.”

If Yale won’t address severe disruptions to expressive activity, then the open exchange of ideas on campus is only as free as hostile mobs allow.

This inaction is inexcusable at a prestigious law school ostensibly committed to upholding the “basic rights . . . of freedom of speech, of the press, and of peaceable assembly.” FIRE’s letter to Yale today explains how this commitment requires administrators to make legitimate efforts to protect expressive rights when events are threatened with disruptive conduct. Universities cannot stand idly by when confronted with illiberal “heckler’s vetoes” effected by protesters substantially disrupting an event via violence or other means to prevent a speaker from speaking. Robbing listeners of the opportunity to hear divergent views by pulling a fire alarm, banging a cowbell, or creating myriad discordant noise cannot be allowed to supplant the vibrant discourse fundamental to a university education.

Yale has rules for attendees at expressive events for a reason. If Yale won’t address severe disruptions to expressive activity, then the open exchange of ideas on campus is only as free as hostile mobs allow. Universities acquiescing to heckler’s vetoes encourage more threats to expressive rights, fewer speakers, and a sterile culture for free speech on campus.

FIRE calls on Yale to enforce its policies to ensure that students can host expressive events free from substantial disruption.