In The New Republic, Colby College professor Aaron R. Hanlon argues that the recently-announced University of Austin (UATX) is, in essence, a solution in search of a problem. UATX founders have argued that “illiberalism has become a pervasive feature of campus life.” Hanlon responds that the UATX founders aren’t “faithfully representing” what happens in “classrooms like [his].”

If most students and most professors are worried their speech will lead to sanction from each other, what other evidence would be required to prove “illiberalism has become a pervasive feature of campus life?”

But whether Hanlon’s classroom reflects this trend or not, as FIRE has written and documented, campus illiberalism is, in fact, an ongoing problem. It poses risks to the model of higher education as a whole, and that Hanlon has not experienced that problem, while a credit to his work as a professor, is not a shortcoming of the UATX argument.

Hanlon’s argument suffers from a number of shortcomings. He may be too close to the problem; he relies on old data; new data, including from his campus, indicates the problem is real; and he may have a status quo bias against new solutions.

Being too close for perspective

Hanlon may just be ill-positioned to see the problem. Professors often view themselves as experts in higher education trends, when there’s no particular reason that would be true, any more than any of us who are experts on what happens in our vision are experts in what happens beyond it. That most people have had good experiences with law enforcement does not mean concern with bad police interaction is illegitimate, improperly motivated, or unworthy of study.

There is such a thing as being too close to a problem. The idea that abstract administrators have illiberal motivations is easier to accept than to attribute those motives to co-workers. Discussion of the widespread intolerance for speech on campus is unlikely to be eagerly promulgated in the circles of people actively intolerant of speech on campus.

Hanlon does look beyond his walls by citing a number of studies; unfortunately, his studies are wildly out of date.

“According to this doctor’s report from 1863, President Lincoln is just fine”

As Greg Lukianoff and Jonathan Haidt pointed out in “The Coddling of the American Mind,” the shift that FIRE has seen on campus began around the 2013-2014 academic year.

When arguing that college has a moderating effect on politics, Hanlon cites a study (Dodson) from an edited book (Gross and Simmons) that used data collected in the mid- to late 1990s. When arguing that college students think their professors are more moderate than they really are, he cites a study (Kelly-Woessner and Woessner) with data collected in 2004.

To support the assertion that college graduates had politics similar to their siblings who didn’t attend college, he cites a study (Campbell and Horowitz) that analyzed data collected in 1994 that compared siblings. Half of the data was from participants of college graduation age in the 1960s and 1970s, and the decision to study siblings excluded people without siblings. And Campbell and Horowitz were indeed “clever researchers,” as Hanlon describes them, because they also cautioned against generalizing their findings in the study itself:

…the findings roughly reflect the effect of college education from the end of World War II until the Republican revolution that elected Newt Gingrich as speaker of the House… Thus, the effects of college we report here are limited to a particular time frame and may have changed as the college experience itself has changed.

In their conclusion, Campbell and Horowitz reiterated that “[a]s the college experience changes, the effects of college may change as well.” Given that FIRE has independently noted the biggest change on campuses started around 2014, Campbell and Horowitz’s research, though interesting, is, by its own text, not helpful.

The “there’s no problem in higher education, except these problems” defense

If Hanlon isn’t sure there’s a problem, he might want to start by re-reading his defense. He writes:

Over 70 percent of the professoriate works off the tenure track, without the protections of academic freedom. How many of them are eager to risk student complaint—and their jobs—by foisting political ideology on their students?

In context, Hanlon is refuting the premise of 1990’s Tenured Radicals, which posited that the faculty was driving a leftward drift on campus. But that criticism from over three decades ago is basically unrelated to the post-2013 shift in campus attitudes.

Does it really refute the allegation by UATX president Pano Kanelos that “illiberalism has become a pervasive feature of campus life” to point out that professors live in fear that students may target their jobs for expressing the wrong ideology? Hanlon’s report that adjuncts are afraid of risking their jobs is corroborated by the data from our Scholars Under Fire database, which shows that, since 2015, attempts by undergraduate students to target scholars have increased from 30 in 2015 to 122 in 2020. This is only public attempts to sanction scholars for their expression or research; it doesn’t include things like investigations and charges that happen in the confidential court of higher ed (something Anne Applebaum, Laura Kipnis, and we at FIRE can confirm are real), and it doesn’t even include threats to student free speech which are far more common.

Even with that caveat, there are presently 471 incidents in the Scholars Under Fire database. Of those, 369 took place at one of the 609 nonprofit institutions with 5,000 or more students. Those institutions serve the majority of students in higher education. Given that these targetings alone increased by over 300% between 2015 and 2020, is it really such a stretch to say that campus illiberalism is a problem that invites a radical solution? And if we need a solution, should we not consider new institutions as one of them? 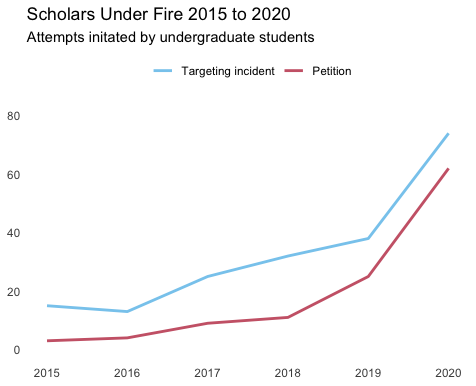 Despite this threat of sanction, the statements students made in response to open-ended prompts on our Campus Free Speech Survey suggest that the possibility of being targeted by students has not entirely discouraged some professors from using classes as an ideological bully pulpit. We asked over 37,000 students how often they felt they could not express their opinion on campus because of how students, a professor, or the administration would respond. One in five students reported feeling that way fairly or very often; only 17% said they never felt that way.

For the 83% who reported feeling that way at least rarely, we asked them to share a moment when they felt that way. Here are some examples from the more than 15,000 responses that were received (these are verbatim and were typed on a phone, so please excuse typos):

Hanlon wrote that the UATX founders’ criticism of campus didn’t “faithfully represent” classrooms like his. Fair enough. Let’s look at some of the statements from students at his college, Colby College in Maine, which ranked 146 out of 154 in our 2021 Campus Free Speech Survey:

(More here.) The quantitative data paints a similar picture. Most (51%) of Colby students reported they would be uncomfortable expressing views on a controversial political topic in a class discussion. About two thirds (66%) said they would be uncomfortable publicly disagreeing with a professor on a controversial topic. Almost half (45%) reported being uncomfortable disagreeing with a professor in a written assignment. All of these numbers are higher than the national averages — but not by much (48%, 60%, and 42% respectively).

If most students and most professors are worried their speech will lead to sanction from each other, what other evidence would be required to prove “illiberalism has become a pervasive feature of campus life?”

Of course, there is a third group on campus. After asserting there was no pervasive illiberalism, Hanlon writes:

…it’s not clear it’s professors or the curriculum that invite self-censorship. More likely it’s what Chad Wellmon calls “the Other University,” the “extracurricular governing apparatus—identifiable on university org charts as Student Affairs, Student Life, Dean of Students,” and distinguished from the academic curriculum “not simply by “the existence of rules … but rather the rigidity of the Other University’s rules and the fixedness of its goals.”

Fair enough; there are certainly as many speech-hostile administrators as there are speech-hostile faculty. But nothing about the UATX’s founding purpose suggests campus illiberalism is uniquely a faculty-driven phenomenon. If “the Other University” (a problem FIRE’s founders dubbed The Shadow University in their 1998 book) is indeed the problem, and UATX’s founders have committed to streamlining or outsourcing extraneous services (such as much of the portfolio of modern Student Life departments), isn’t UATX’s proposal calculated to address that issue?

If Hanlon acknowledges illiberal instincts on campus that are common enough that he can debate their origin, and if he theorizes the origin is a series of departments common to every existing campus, isn’t he ultimately agreeing with Kanelos’ statement that “illiberalism has become a pervasive feature of campus life,” and he’s worried about assigning blame?

Be open to solutions

That the criticisms of the modern campus leveled by the UATX founders look alien to Hanlon suggests he is indeed the kind of professor any student should be thrilled to have. Not every professor lives up to that model, and there are enough opportunities for problems that most campuses experience some level of speech restriction.

Skepticism can be healthy, but reliance on 30-year-old studies and anecdata as justification for defending a highly wealthy, influential, bureaucratized, and expensive system against a startup looks more like status quo bias. The problem is real and to the extent UATX may be part of a solution, we should remain open to it.